The Old Grey Wolf Returns: Mike Rhyner Is Back on Radio As the Head Freak in Charge at 97.1 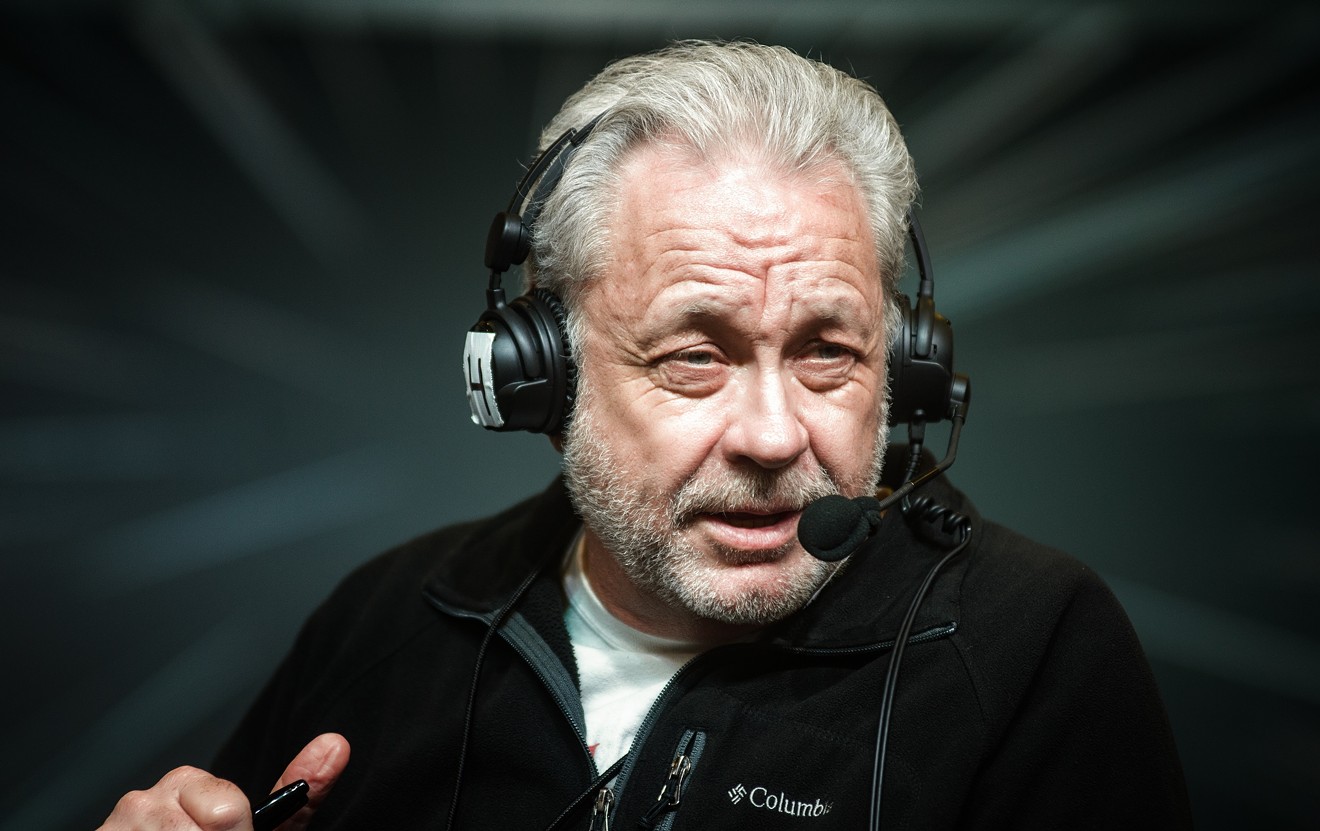 The Old Grey Wolf howled on The Ticket one last time, but now he's back with the competition. Mike Brooks
Retirement isn’t for everyone. Even those who have successfully made the transition from working stiff to creature of leisure can sometimes find themselves itching to jump back into action should the opportunity present itself.

Up until the summer of this year, retirement had been great for Texas Radio Hall of Famer Mike Rhyner. He left his role as cohost of The Hardline on 1310 The Ticket in January 2020 after 26 years of being the face and voice of one of the most powerful and wide-reaching radio stations in the country. His move not only sent shockwaves through the place on the dial he had created in 1994 with a largely unknown band of radio misfits, it generated headlines through the national radio industry.

But he's back on the air now, shockingly, as the marquee personality for newly christened 97.1 The Freak. The all-talk format debuted on Oct. 3, replacing the 97.1 The Eagle, which had been a hybrid of modern rock music and talk. Sports will be central to the station's focus. Rhyner calls it “sports adjacent,” but The Freak is not an all-sports station. The current events of the day and pop-culture topics will also be front and center.

And to be clear, Rhyner’s return to the airwaves isn’t the result of his retirement growing stale.

“Initially, I was worried that four days after I left The Ticket, I’d be in bed at 4 in the afternoon, wondering ‘Oh, god, what have I done?’” Rhyner says over the phone. “But that never happened. I very quickly embraced the idea that when you retire, you get to do what you want, whenever you want.”

That freedom and autonomy are what lured “The Old Grey Wolf,” as he’s known to generations of local radio listeners, from the rocking chair back into the studio seat. After temporarily filling in for 97.1 host Jeff “Skin” Wade earlier this year when Wade underwent cancer treatment, Rhyner, Wade and his cohost Ben Rogers began exchanging ideas about what sort of station they'd like to belong to if given the chance.

For Rhyner, there was a simple, key ingredient he would require for any new gig. He wasn’t ready to leave the freedom of retirement for a station with many, or any, constraints.

“There is a parallel to what I’m doing with the station now and what I was doing in my retirement,” he says. “I have to do it within the bounds of radio, of course, but those stretch pretty wide. We at the station get to say what we want, however we want, whenever we want, and there aren’t many people in radio who get to do that.”

Rhyner isn’t the only former Ticket personality flying their freak flag these days. Julie Dobbs, Mike Sirois and Michael Gruber each have key roles at 97.1, with Dobbs cohosting The Speakeasy morning show with Jeff Cavanaugh and Kevin Turner, and Sirois serving as Rhyner’s cohost on the afternoon show The Downbeat, in which Gruber acts as board operator.

This new addition to the Dallas/Fort Worth talk radio scene has stirred up a good bit of passion and has introduced a rare public airing of grievances. The day The Freak debuted its programming, The Dallas Morning News ran a column that included a reaction from Rhyner’s former Hardline cohost Corby Davidson and former boss, 1310 program director Jeff Catlin. Davidson called Rhyner’s surprise return “unimaginable and unconscionable” and said that Rhyner “destroyed relationships that had been in existence for 30 years.”

It was a strong shot, and it’s one Rhyner wasn’t necessarily surprised to hear. Still, it left him feeling perplexed. The following day, Oct. 4, Rhyner, Dobbs and Sirois used the prime 5:30 p.m. drive-time segment to address what Sirois called “the elephant.” Rhyner was diplomatic, but head-on in his response to Davidson and Catlin’s comments, saying, “if any relationships were destroyed, it wasn’t by me, because as far as I’m concerned, those relationships still exist.”

Rhyner’s responses during that segment weren’t groundbreaking or particularly juicy. If anything, he explained, he understood that his former coworkers have a sort of tribal mentality, in large part because he had fostered that in the earliest days of the Ticket. The segment was noteworthy, however, in that the hosts were allowed to wheel out a bit of dirty laundry that usually remains hidden.

“There’s no sinister plot to overtake The Ticket in play,” he says. “But we are competitive people, as are the people at the Ticket. But I’m in it to win it. I’m going to do what I have to do, within reason, to come out on top of this thing.” – Mike Rhyner


He also gets why the story with this new station is attracting more attention than when other talk stations have premiered in the area or when other former Ticket voices have found new homes. He likes that instead of playing the usual radio game where a station’s personalities are told to not address any off-mic drama on air, he and his mates were allowed to speak freely and let the listener in behind the curtain.

“The difference with The Freak is that you have three fairly high-profile Ticket employees who left on their own terms," Rhyner says. "They weren’t fired. The Ticket is such a great place to be that most people are trying to get there, but here are three significant figures who left. What does that say, exactly?”

Rhyner also says he’s “an all-in kind of guy,” and that while he understands The Ticket is a ratings titan that's perhaps unlikely to be toppled, he’s not shying away from trying.

“There’s no sinister plot to overtake The Ticket in play,” he says. “But we are competitive people, as are the people at the Ticket. But I’m in it to win it. I’m going to do what I have to do, within reason, to come out on top of this thing.”

If nothing else, this local radio drama has proven to Rhyner that people still care about radio, even with the rise of podcasts and satellite radio.

“That people still care about this medium has been one of my biggest takeaways from the first week of broadcasting,” he says. "If you give people something good to listen to, something they want to hear, they will be there. It sounds simple, but most stations these days are very conservative and afraid to take chances. Everyone’s trying to keep their jobs and unwilling to color outside of the lines, and that’s too bad.”

Even more than the public’s enduring affinity for terrestrial radio, the “happy retiree” in Rhyner has been surprised by something else after his first few days of being the voice of The Freak.

“The biggest surprise for me is just how ready for this I was,” he says. “I thought I’d have to go through a break-in period where I might have an ‘Oh my god, what have I done?’ pause, but every day this week I’ve gotten going and I’ve embraced the day, embraced the challenge, embraced the show, all of it. I’m really digging it, man.”
KEEP THE DALLAS OBSERVER FREE... Since we started the Dallas Observer, it has been defined as the free, independent voice of Dallas, and we'd like to keep it that way. With local media under siege, it's more important than ever for us to rally support behind funding our local journalism. You can help by participating in our "I Support" program, allowing us to keep offering readers access to our incisive coverage of local news, food and culture with no paywalls.
Make a one-time donation today for as little as $1.
Kelly Dearmore