Game Not Over: Arcades Are Struggling to Stay Open 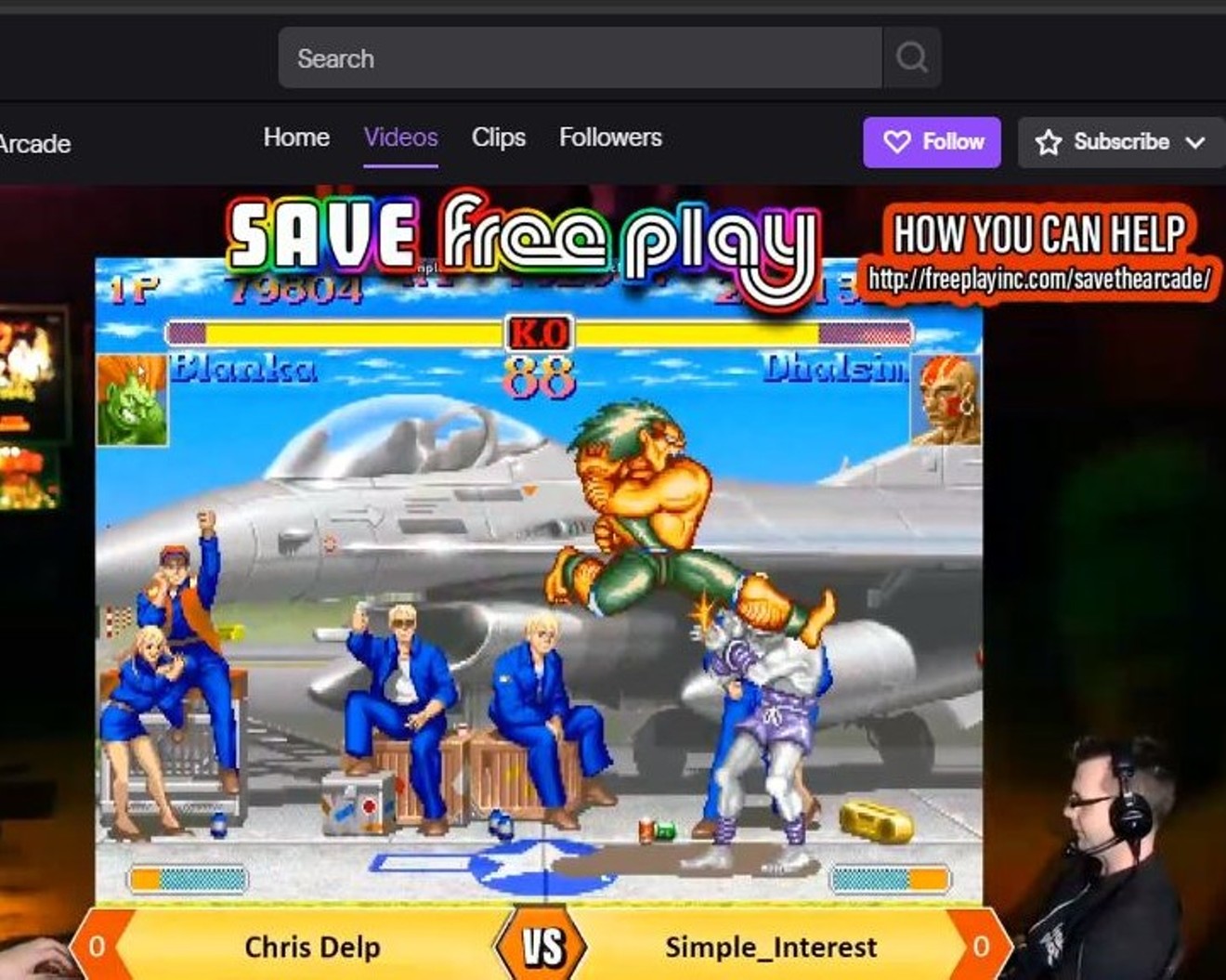 Chris Delp, the former community liaison of Free Play Arcade, competes in a Super Street Fighter tournament on the arcade's 24-hour Twitch stream. Screenshot by Danny Gallagher
Video game arcades used to be filled with beeps and boops and faces glazed with the neon glow of pixelated images.

These days, they're practically empty and the machines aren't operating. They've been unplugged, and the only faces inside are the few remaining staff members looking after the place while the crowds are gone.

"We were living the arcade dream," says Cory Hyden, the owner of the Free Play Arcade chain. "The craziest thing to me is we had old arcades still being delivered to us from four or five months ago and they're still showing up to my door, and I feel like such a chump."

Since places like Free Play, the Cidercade and Regeneration Arcade can't let the quarter-clutching crowds come to them, they are finding new ways to do business and rally their communities to keep from closing.

"I was sitting at the bar and looking around and there are all these games here and nobody to play them," says Travis Hintzel, the owner of Regeneration Arcade. "I'm an entrepreneur mind, and when employees are in danger of losing an income, I want to make sure to keep food on their table and want to bring in some more revenue to do that."

Hintzel says his arcade closed just over two weeks ago, but a few days later, they started offering ways to bring the arcade to their customers. They started by selling pizzas with curbside pickup and delivery, but "that business gets spread," he says.

Then Hintzel says they started renting out their 23 video game and pinball arcade machines from patrons to keep in their homes for a week at a time. The arcade's staff cleans and delivers each machine to people's houses.

"We're definitely not making as much (as) when we're open," Hintzel says. "Nobody is, but we're doing enough where we can weather the storm. There's been a lot of community support, and a lot of people have stepped forward and helped out in big ways. We're super grateful to our community for that. It feels really good that people want you to say there."

The Cidercade, housed in the Bishop Cider Co.'s facility, had to lay off its bartenders and arcade staff, but it has plans to bring them back after they reopen. The other side of the business' staff is doing what they can to keep the cider brewery running, says owner Joel Malone.


"We're willing to do anything to survive." — Cory Hyden

"We're a cider company first so we're legally a winery and we can still sell our products," Malone says. "We're delivering our stuff to within 15 miles and in the spirit of helping other businesses in any way we can, we decided to use flexibility in our license to carry wines and meads from other suppliers."

The loss of the arcade may have cut Malone's profits in half, but sales from its wholesale cider business has picked up and "hopefully things will go back to normal in May or June and we can open in the fall."

"We 're using this opportunity to do a completely new layout in the arcade and do some maintenance on our arcade machines," Malone says. "Unfortunately, our games are just being idle right now."

Free Play Arcade opened two new locations in Denton and downtown Fort Worth before the shutdown and also started doing food and beverage deliveries on the weekends before the owner had to let go almost the entirety of its staff across all locations, but one employee wanted to do more.

Chris Delp, Free Play's community liaison, decided to start a 24-hour Twitch stream on the arcade's official channel featuring live tournaments, interviews with arcade champions and anything else they can think of to fill time. During one weekend, Delp and his team of volunteers organized a round of video game Jeopardy! for his viewers.

"I looked at the arcade that was closed down at that point, and I pointed to a few community members and said I can have a few members in my house and I have a VR system set up and two quality computers in my room," Delp says. "If you can set up all the equipment, we can continue to fight the fight and keep people company, or it all dies right here."

Delp says they've basically created their own video game channel complete with a weekly show schedule dedicated to things like music and pinball. The arcade's community may not be able to completely make up for the loss of revenue but they've opened their wallets to give what they can in some amazing ways.

Regeneration Arcade delivered a couple of arcade cabinets to a home so regulars like (from left) Reeve, Huddy and Dawson Jurskis can play Mortal Kombat II and Golden Tee while the arcade is closed.
courtesy Travis Hintzel
"People are supporting us with Patreon and PayPal," Delp says. "They've bought merchandise. They bought enough that an administrative assistant got employed for an extra week and that was good for Free Play."

These temporary business plans aren't making up the massive losses under the shelter-in-place shutdown, but all three arcades' owners and operators are confident that it will carry them through to when they can open their doors again. It's not just about giving customers something they miss. It's also about keeping as much staff as they can afford and being able to rehire them later.

"I definitely see it as my job to plan for business interruptions," Malone says. "While this was a huge surprise, we always plan for things like this to happen. We didn't expect a virus. It could have been a fire or something, but things happen. With the livelihood of so many staff members relying on us, it would be very irresponsible to manage our cash flow where a little hiccup would make us go out of business — and I do realize not every business has that luxury."

Arcades across North Texas are hopeful the day will come when they can turn their games back on and open their doors to the crowds who've been stuck at home anxiously waiting to play them.

"We're willing to do anything to survive," Hyden says. "The silver lining we're trying to look at here is we're going to have a lot of people at the arcade once we open up, because they'll be coming to get their food here."
KEEP THE DALLAS OBSERVER FREE... Since we started the Dallas Observer, it has been defined as the free, independent voice of Dallas, and we'd like to keep it that way. With local media under siege, it's more important than ever for us to rally support behind funding our local journalism. You can help by participating in our "I Support" program, allowing us to keep offering readers access to our incisive coverage of local news, food and culture with no paywalls.
Make a one-time donation today for as little as $1.