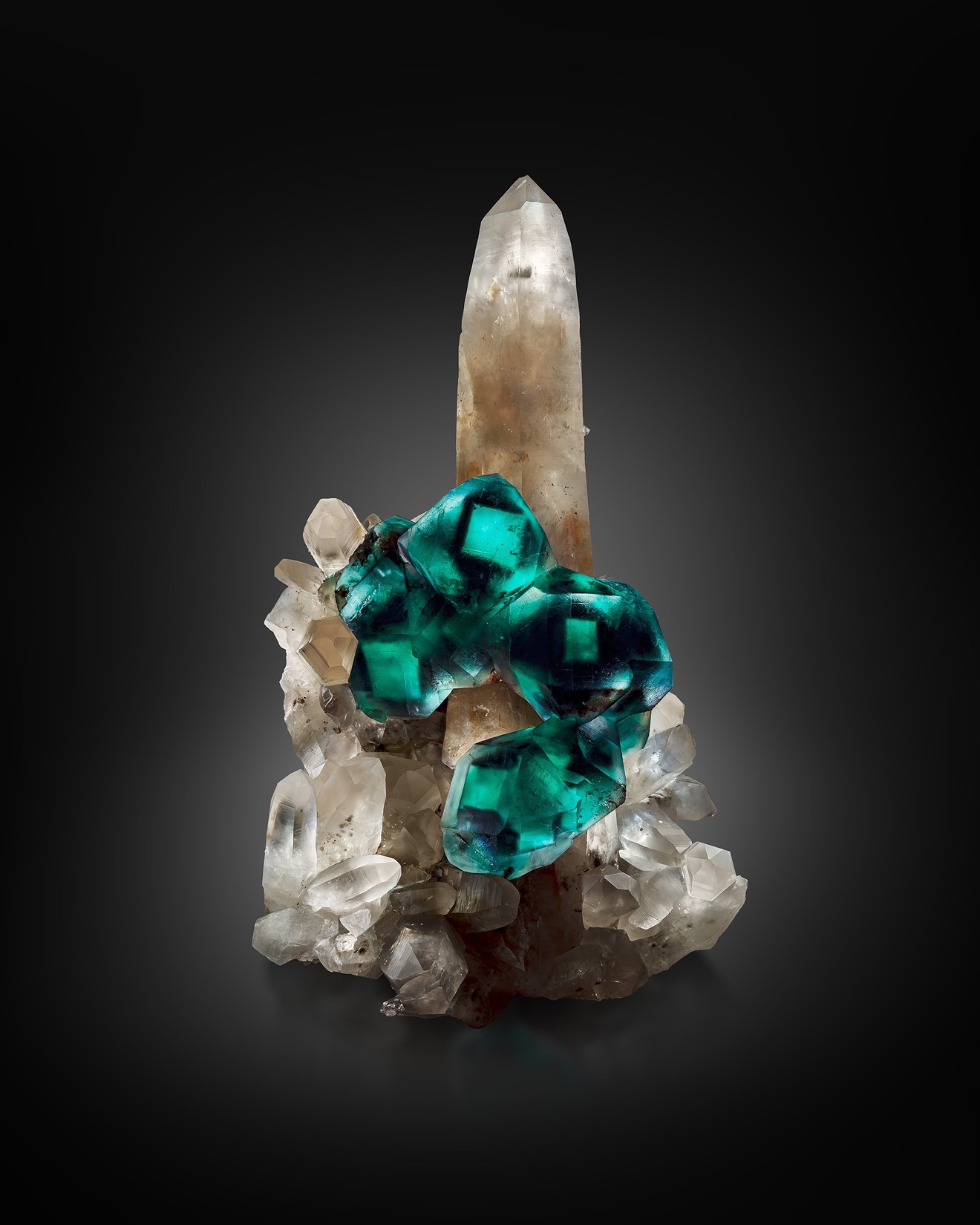 The Eyes of Africa is the most important specimen of "alien eye" fluorite yet discovered, and until now, few have seen it. Elliott Fine Minerals International
Visitors to the Perot Museum this week are among the first people in the world to lay eyes on a mineral that has a "cult-like following in the mineral collecting community," according to a press release by the museum of nature and science.

On Wednesday, the Perot unveiled Eyes of Africa, the largest and finest specimen of "alien eye" fluorite yet discovered. The Eyes of Africa was found in 2007 and spent two years undergoing cleaning. After that, its original owners, collectors Mark Kielbaso and Jurgen Tron, spent many more years debating where and when to debut it.

The specimen comes from a region of Namibia near the Erongo Mountains. The press release explains that 130 million years ago, a large volcano erupted in that area and has since produced a remarkable and wide variety of minerals — 70 in all.


"The glow of the green zones was so intense, many likened their effect to something out of a science fiction movie."

Most prized are the fluorites, which form in unusual shapes compared with other fluorites, come in nearly ever color of the rainbow and are incredibly vivid. The color of the minerals is determined by whatever impurities were present as they were forming.

Each color is contained to a pocket of the Erongo region, and collectors of Namibian fluorites often seek out one of each. One pocket has become known as the alien eye pocket.

Alien eye fluorites are black on the outside with clearly defined, emerald green diamond shapes in the center that seem to glow.

"The glow of the green zone was so intense, many likened their effect to something out of a science fiction movie," the release reads.

According to the release, Gariseb had quickly sold most of his alien eye fluorite finds, but when he came across the Eyes of Africa, he knew not to act so hastily. Made of fluorite and quartz, it is 22.8 inches tall, 13.3 inches wide and 10.2 inches deep and weighs nearly 65 pounds.

"It went in the trunk of his white Mercedes and followed him everywhere he went," the Perot says.

It didn't take long, however, for American collectors Kielbaso and Tron to get wind of the discovery and set to work tracking Gariseb down.

"They drove for hours which then turned into days," the release says. "The white Mercedes became their White Whale."

When Kielbaso and Tron finally located Gariseb, they negotiated a deal with him to purchase the Eyes of Africa. Gariseb's one condition of the sale was that they take a photo of him with his precious find.

But the sale was only the first in a series of complicated steps to get Eyes of Africa ready for the public. First, Kielbaso and Tron purchased 400 diapers and a steel drum to encase the mineral for transport on an ocean freighter. It took three months for the purchase to arrive in the U.S. and after that, another two years to clean it of mud and silica debris.

The Lydia Hill Gems and Minerals Hall at the Perot Museum has acquired the Eyes of Africa and is presenting it to the public for the first time.

See Eyes of Africa at the Perot Museum of Nature and Science, 2201 N. Field St. Admission is $18 at perotmuseum.org.