A Sneak Peek at PlayStation Virtual Reality, from Iron Man to MLB Shoot some bad guy's expensive stuff out of the sky by stepping into Tony Stark's heavily reinforced shoes in the upcoming PlayStation VR game Iron Man VR. Sony Interactive/Marvel/Camouflaj
Summer is coming and if you've got a PlayStation 4 or a PlayStation VR headset, then you've got some very good reasons stock up on Vitamin D supplements and never go outside again until the fall.

Sony gave the Observer a chance to preview some of their newest unreleased exclusives for the PS4 and PSVR, including Camouflaj's Iron Man VR, the post-apocalyptic adventure Days Gone, Sony's baseball simulator MLB The Show 19 and the virtual sports game Everybody's Golf VR at a special demo event on Tuesday at the Omni Hotel.

Iron Man VR (PSVR, TBD 2019)
If you've ever asked out loud, "Why would anyone want to play a virtual version of Iron Man?" then you're either an alien doing a horrible job at impersonating a human being or the enemy of fun. In fact, it's kind of a head-scratcher that the video game industry has yet to produce a console or VR game that lets gamers be Tony Stark in any existential capacity. If Hollywood can produce a version of Iron Man that looks awesome on the big screen, why can't they do the same for smaller screens?

Well, the Bellevue, Washington, studio Camouflaj has finally corrected this egregious error of geek-ery with Iron Man VR, a PSVR game that uses its very natural augmented reality interface to help you fly and fight like the Marvel Universe's cockiest multibillionaire in its own standalone universe.

"It's its own unique experience and Iron Man story," says Camouflaj game designer Ryan Darcey. "It feels as Iron Man as possible."

The controllers mimic the movements of Stark's Mark VIII suit (or whichever version is in the game; I'm sure the angrier comics readers will let us know) as if you're actually flying and fighting in the thing. Boosters shoot out of the palms of the suit's gloves and the player can glide through the air by positioning them to move between checkpoints and enemy positions. The game also recognizes that you're not an aviation expert, so it doesn't penalize you if you happen to fly head-on into a giant obstacle that you can't blast out of the sky like a rock formation or a plummeting aircraft.

Iron Man VR is just as much fun as you'd think it would be to run dogfights as a flying marvel of military weaponry without the possibility of being blown out of the sky like a condor covered in aluminum siding. The Philadelphia Philles' star slugger Bryce Harper made the cover of Sony's Major League Baseball sports sim MLB The Show 19.
Sony Interactive/SIE San Diego
MLB The Show 19 (PS4, available now)
EA Sports may have a huge monopoly on collegiate and professional sports sim games but they don't own the pixelated rights to every sport such as the Professional Bowlers Association, the Professional Disc Golf Association and Major League Baseball.

The big challenge of making a baseball video game sellable without turning it into a dumbed-down arcade version is that not every gamer has the attention span to play a full nine or more innings of a game or a full season of 162 games. The latest version of Sony's long-running MLB game franchise offers some clever modes that can reach players who want to play baseball but don't feel like playing, um ... well, baseball.

The development team noticed that general sports fans and gamers tend to lose attention while trying to complete or even watch a full MLB season.

"Fans come to baseball from different breeds like football, hockey or basketball," says MLB The Show 19 game designer Ramone Russell from the Sony Interactive Entertainment San Diego studio. "If their team is not in contention, they tend to check out."

So MLB The Show 19 offers two game modes in addition to the traditional exhibition scrimmage and full season simulator. The "Moments" mode challenges players to recreate some of baseball history's greatest moments, like Babe Ruth calling his home run shot in the third game of the 1932 World Series, games like the Chicago Cubs' astounding World Series Game 7 win in 2016 and entire seasons like Bryce Harper's MLB rookie tourney. Future downloadable updates will include more memorable moments as the current MLB season unfolds from game to game. These moments are faithfully recreated for the hardcore baseball fan but it's still accessible and offers a challenge for gamers who don't dedicate their every waking minute to completing a virtual season.

The "March to October" mode offers another chance to play a team's season through each club's key moments so players don't have to kill all of their vacation time from work to get through it. All 30 of the league's teams are broken down into categories including "Favorites," "Contenders," "Underdogs" and "Longshots" (and I really don't want to have to tell you which one the Texas Rangers are in so let's just say if the game had a "nightmare difficulty" mode, they would be in it) and each team has around 20 episodes per season. The moments still offer a full, playable simulation of a real major league game that can affect the team's season-long outcome based on how you win rather than if you win. MLB The Show 19 also accomplishes this without sacrificing the competitive challenge and skill of the game. 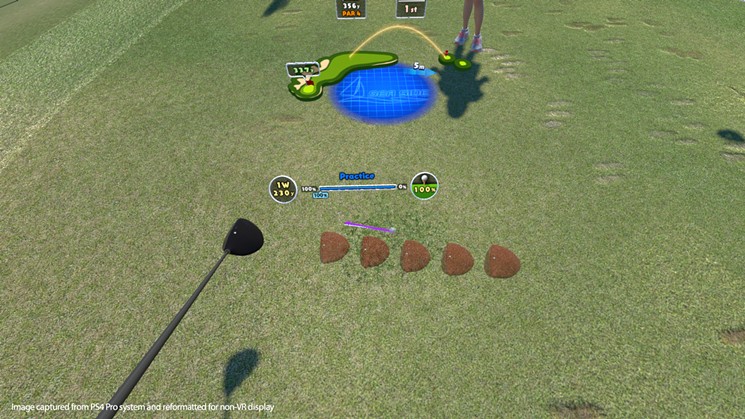 The virtual version of Sony's long-running golf game Everybody's Golf VR lets you take practice swings to show how your club approaches the ball and the direction it will travel if you actually hit it.
Sony Interactive/Clap Hanz
Everybody's Golf VR (PSVR, May 21st)
The colorful, long-running family golf franchise that's been part of Sony's PlayStation empire since the PSOne continues its long reign with a virtual version on the PSVR. Everybody's Golf VR is a golf simulator the way that the NBA Jam games simulated professional basketball. It's just about getting on the course and playing the sport with otherworldly bonuses and modifiers that PGA players wish they could use without getting fined or charged with witchcraft.

"The idea was to take the fun and accessibility of the franchise and bring that over to VR," says Sony SNE executive director Daimion Pinnock.

The virtual version puts players in the spiked shoes of the golfer. They get a full, standard set of clubs and a series of unlockable caddies as they move through the game to help them in their quest for the putting green. You hit the ball using the VR controller like a club with the glowing ball pointing toward the ground. The game lets you take some practice swings before you take your shot and shows you the path that your club took in your swing and the direction the ball would have gone if it made contact. So it's easy to correct with just a slight turn of your wrist and a sharper aim on your downswing.

Just like the game's non-virtual versions, Everybody's Golf VR's signature power-ups mostly come when it's time to putt like large diameter putting green cups and swirling tornadoes that can suck your ball into the hole. So if you've got kids who need some upper arm strength after hours of only moving their thumbs on a controller, you can play along with them and actually compete on an even level. The virtual version also is the first in the franchise to include a driving range if you just want to whack a bucket of balls into the ether of its virtual void.

Deacon tries to outrun and outgun a horde of rampaging freakers in the post-apocalyptic, open-world adventure game Days Gone.
Sony Interactive/Bend Studio
Days Gone (PSVR, April 26th)
Finally, let's get to one of the most popular and addictive facets of modern gaming: gunplay, explosions and delicious violence. Days Gone more than delivers in those departments, but it's not just about scratching the itch for violence in our brains left by our Neanderthal forefathers.

Sony's latest addition to the zombie horde shooter puts players in control of a biker gang member named Deacon who rides to survive in the post-pandemic world of Oregon's wilderness that's crawling with bloodthirsty, sprinting mutants called "freakers." Not every challenge requires you to mow down every one of the lumpy screamers in your path. Deacon also runs across different gangs of non-mutated humans that range from friendly to downright deadly and crazy. These varying enemies create a fun mix of stealth and strafing challenges that requires a good sense of strategy to get through them with all of Deacon's limbs intact.

However, these aren't your grandfather's mutated undead. The freakers swarm on their victims like a floating mass of angry bees. They move like water rushing over rocks and seep into chokehold points to get at their prey. They vault over obstacles and squeeze through tight spaces as they follow your evading path while some even try to cut you off up ahead by leaving the pack. A mob of 500 freakers can chase you down and you'll have to do more than just fire a high-powered rifle into the moving mass. You'll have to find places to hide trip mines and lead the mob past them to reduce their numbers and use the terrain to your advantage.

Days Gone is about more than just running and shooting. You'll have to learn how to "be a better survivor," says game director Jeff Ross. Deacon also gathers supplies to craft weapons, explosives and health kits forcing players to decide if they should use them right away or save them for a bloody day.
KEEP THE DALLAS OBSERVER FREE... Since we started the Dallas Observer, it has been defined as the free, independent voice of Dallas, and we'd like to keep it that way. With local media under siege, it's more important than ever for us to rally support behind funding our local journalism. You can help by participating in our "I Support" program, allowing us to keep offering readers access to our incisive coverage of local news, food and culture with no paywalls.
Make a one-time donation today for as little as $1.