Fireball Island Is Back Bigger, Badder and Fireballsier Than Ever Thanks to Restoration Games 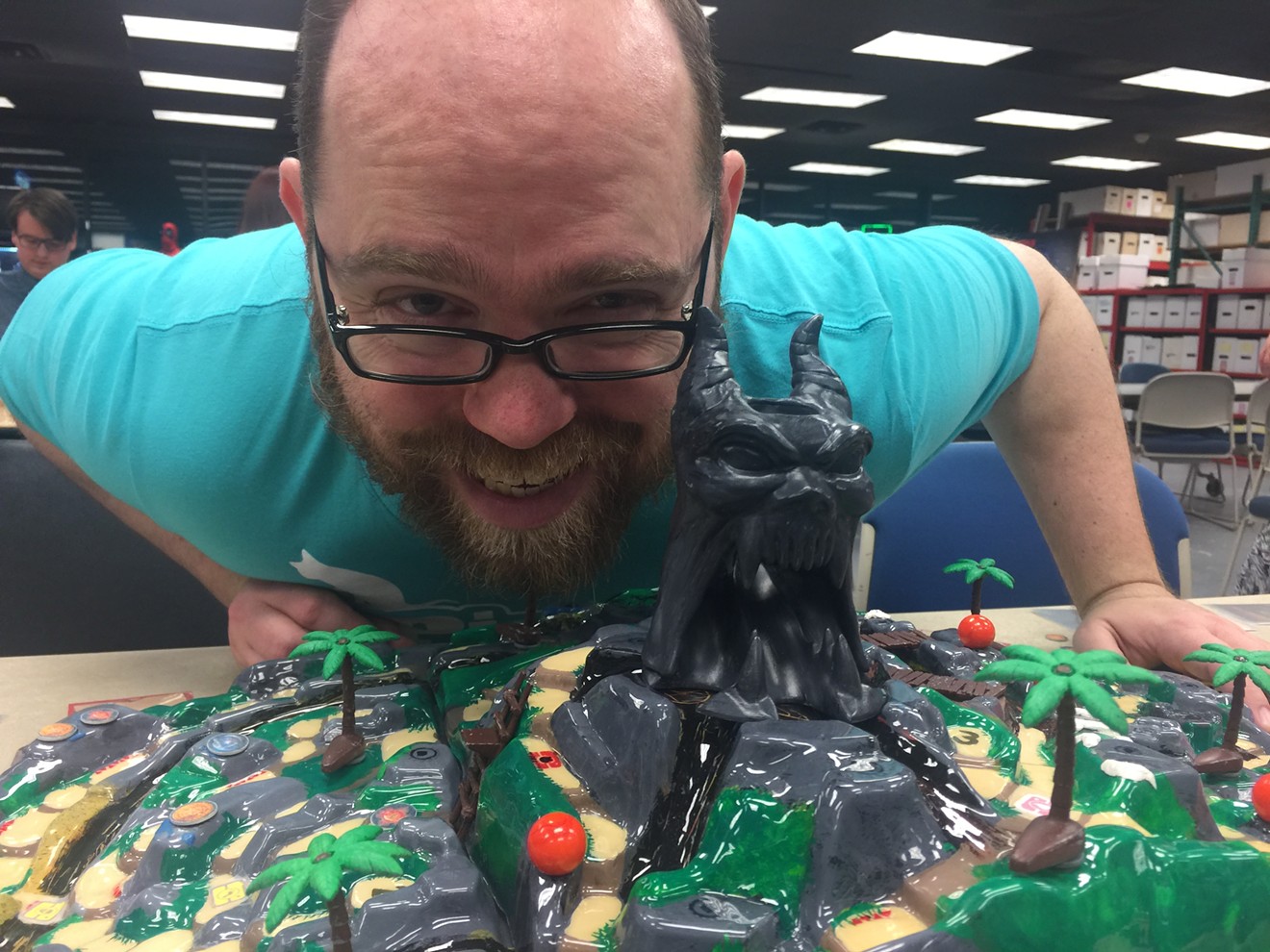 Restoration Games' J.R. Honeycutt, the co-designer of Fireball Island: The Curse of Vul-Kar, shows off the expensive prototype for his epic board game on Thursday night at Collected Comics & Games in Fort Worth at the end of a long, nationwide tour. Danny Gallagher
Fireball Island was the board game that could beat up any other game in a fight in the '80s if board games suddenly grew arms and feet and developed a taste for hand-to-hand combat.

The 1986 board game published by Milton Bradley came in a box four times the size of the traditional board game. It needed the bigger box to fit the massive plastic mold that served as the game board and all the special pieces that made the game unique, like rickety bridges, special action cards and the giant, rotating head of Vul-Kar, a massive idol that could spit fireballs at explorers who dared to venture onto the island to steal the giant ruby.

Fireball Island has long since gone out of print and the Milton Bradley brand was absorbed into Hasbro Games, but the children of the '80s who remember the board game are still hunting for original copies with all of its pieces. Unopened copies can sell for hundreds of dollars online.

"People remember it being really fun," says Restoration Games' "Tinker-in-Chief" J.R. Honeycutt of Fort Worth. "It was the holy grail of games. It was big and kinetic and you could knock the marbles around and knock down your friends."

Honeycutt's company brings back long-gone board games for new generations of players, among them the criminal-hunting deduction game Stop Thief and the high stakes racing game Downforce. Honeycutt says the fans have been clamoring for Restoration Games to bring back Fireball Island since they sold their first title. Scott Sumner prepares to unleash a fury of fireballs through Vul-Kar's head during a recent demo of Restoration Games' new sequel to Fireball Island.
Danny Gallagher
"We have a form on our website that asks what games they'd like to see restored, and Fireball Island was far and away the one they wanted us to do," Honeycutt says.

Last year, Honeycutt, Poisoncraft designer Justin Jacobson and Pandemic: Legacy creator Rob Daviau started designing a Fireball Island sequel called Fireball Island: The Curse of Vul-Kar. Once they finished a working design and built a suitable prototype, they launched a Kickstarter campaign at the beginning of April that reached its $250,000 goal in less than an hour. The 30-day fundraising campaign has raised more than $2.1 million in the last 27 days.

Honeycutt has been on the road since the start of the fundraising campaign traveling as far north as Boston (or 4,125 miles with 63 Dr. Peppers drunk to be exact, according to a Google Sheet he uses to track his traveling stats) to show off the one working prototype of the new Fireball Island game to fans who are eager to buy their own copy when it goes up for sale later in the year or gets shipped to backers who helped the company reach their funding total. The demos have attracted crowds of players at almost every stop, including one at the tail-end of his tour last Thursday at Fort Worth's Collected Comics & Games.

"The volume of responses at each stop is something I've never seen before for a board game," Honeycutt says. "I don't think anyone has gone on tour for a board game, and I've had over 100 people show up in places like Indianapolis. It's been a packed house wherever I've gone."

The new Fireball Island game builds on the basic gameplay of the original and expands on it both in size and scope. The game board is made up of three 3D molds and provides more than a single path for explorers to move through and fireballs to bounce down as Vul-Kar spits them out of his tri-chute mouth. Instead of just retrieving the famed jewel sitting next to Vul-Kar's rotating head and making it back to the rowboat first without getting crushed by a fireball, the goal is to win the most points by completing different challenges and using cards to move your player and activate special traps on your fellow explorers before a "cataclysm" triggers a race back to the helicopter pad. The new Fireball Island comes with special movement and action cards.
Danny Gallagher
Possibilities for points include retrieving the jewel and other archaeological keepsakes, obtaining souvenir snapshots of the island and stealing treasures from your opponents by knocking them over with fireballs, boulders and wild tigers. Players also have more control over where the deadly obstacles go, with new features like rotating palm trees that can divert fireballs' paths, flick-able fireballs and boulders and jumping tigers that players can launch like the plastic ants from the classic kids game Ants in the Pants.

"I like the element of timing and knowing what cards to play when," says Joanna Schmidt, who got to play the game at Collected on Thursday. "It also has this great dexterity element with flicking the fireballs at your opponents."

Honeycutt and his designers have also planned special expansions, such as extra action and power cards, treasures that players can steal for more points, deadly traps like swarms of bees and even places that players can explore, such as a sunken pirate ship game board with a skull and crossbones launcher that sends cannonballs rolling towards trespassers.

"I like that it's random," says Johnny Honeycutt, who also took a run at the new game and is not related to J.R. "It's like Mario Party. You can be at the bottom and still make your way to the top, so it has this great element of surprise."

J.R. says he's played his new Fireball Island game 133 times during his 30-day tour and it hasn't lost its sense of fun. He also says he's never lost a game, although his girlfriend Victoria Mann notes, "I feel like he's cheating because he's had so much practice."

"This is the only game I can remember working on that after all was said and done, I still wanted to play it," he says. "That's a really good sign."

J.R. is also delighted by the massive monetary support and fan clamor for the new game even if it means he's got more work ahead of him and his team, printing and shipping 50,000 copies in the coming months.

"I'm humbled and excited that people want it this much," J.R. says. "I'm really happy with how people have responded."