Stephanie Hollman reflects on her three seasons. Brian Maschino
It’s a Friday afternoon and The Real Housewives of Dallas star Stephanie Hollman is all alone in her newly renovated Dallas home. Outside, the rain is pounding into her infinity pool overlooking Turtle Creek, while inside, her miniature goldendoodle Biscuit keeps her company. Her youngest son, Cruz, is off on a father-son camping trip for the weekend and her oldest, Chance, is still at school.

Nearly three years have passed since the Observer first sat down with Hollman. Back then, she was with her four cast mates, and the first season had yet to air. No one in the restaurant where we met recognized Hollman or the others as they ate sushi and talked about why they decided to join the cast. They were about to begin an encounter with Twitter trolls, broken friendships and shattered wine glasses.

“I knew nothing,” Hollman says. “I feel like I was mostly anxious, scared. I kind of went into doing the show to find myself, which is really strange because I had never really got out of my comfort zone. I just wanted to see what it was like, and I always feel like, if an opportunity presents itself out of nowhere, just go with it and see what happens. I went in very blindly, and I think I clung to Brandi [Redmond] so much [during] season one because I was terrified.”


"I kind of went into doing the show to find myself, which is really strange because I had never really got out of my comfort zone." – Stephanie Hollman


Hollman has the Dallas look — ocean blue eyes, straight blond hair and pink fingernails. She’s wearing a crisp button-up white blouse with skinny jeans. Her living room and kitchen are made up of different shades of beige and blue, and nothing is out of place. She sits with her legs crossed, and anytime she says something silly, she immediately bursts into a cackling laugh.

“My days are pretty easy,” she says. “I have time to do Twitter and Instagram. Then, I have a little list of things that I give myself that I need to accomplish around the house and people coming to fix things because things always end up breaking one after another. They don't happen at once.” Hollman looks back on the beginning of The Real Housewives of Dallas. During the first season, many of the scenes included jokes about poop and cat fights among the women, and many of her so-called friends in the social scene stopped talking to her because they and others thought the show was an awful representation of Dallas women. Hollman says it was painful then, but now she laughs at their hypocrisy when she hears those same people are trying to get on the show.

“I would say it was horrible season one,” Hollman says. “Season two, it got a little bit better. This year, so supportive. Mind-blowing supportive. Feels like it's a huge shift, and I think it's just because people realize that the world is not going to end. I think they kind of look at it as entertainment, so it's been a really nice shift.”

Hollman grew up in Oklahoma, going to church three times weekly with her mother, a Sunday school teacher, and her father, a deacon in the church.

At Oklahoma State, she earned a degree in psychology and then took jobs as a social worker — first at a school for children in poverty, then a homeless pregnancy shelter. Today, she runs a nonprofit for her husband's company, which manufactures lockers. She works to provide the company’s employees’ family members with educational opportunities.

Social work — or really just helping others — seems to be what Hollman loves the most.

“I love when people write me about their problems,” she says. “I love that. I love feeling like I can help people.”

She understands that people who tweet her just want to be seen. She hopes with her platform she can make a difference in someone's life.

Hollman’s past as a social worker is evident in how she handles herself during arguments among the women. During an episode in the third season, housewives D’Andra Simmons and LeeAnne Locken fought about Locken telling others about Simmons' small bank account. All six housewives are in the scene and tensions are high. As Simmons breaks down over the humiliation, Hollman grabs her.

“Nobody cares about any of that,” Hollman says to Simmons. “I’m not a fair-weather friend, and I don’t think any of these girls are. You are loved regardless of what you’re going through. You know that, right?”

In a show where cat fights rule the ratings, it was a tender moment that showcased Hollman’s warmness and empathy. 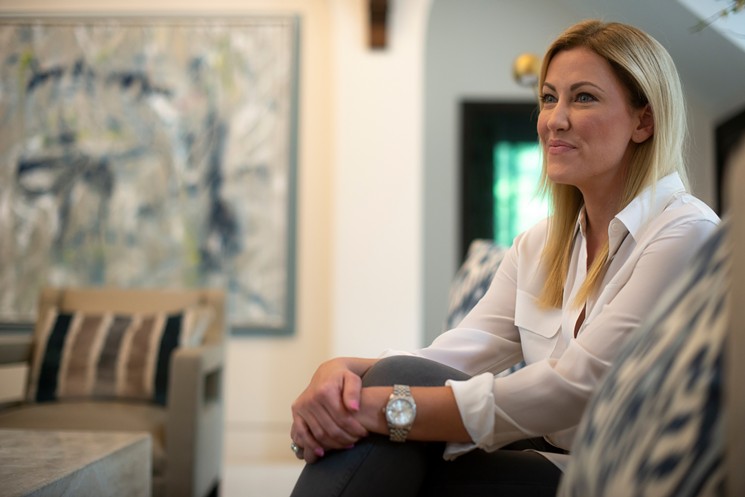 In fact, Hollman hasn’t yelled at anyone on the show. When Locken showed up to Hollman’s Halloween party making fun of Hollman, Hollman chose to ignore it instead of making a scene. Hollman’s scenes are usually made up of her and Redmond joking about their bowel movements or times when she’s just having a little too much to drink. During this season, Hollman, who had had some wine, attempts to connect with Locken. She knew Locken had dealt with depression, so she tells Locken about her suicide attempt. At 22 years old after a failed relationship, Hollman swallowed an entire bottle of pain pills.

Hollman says in the days leading up to the airing of that episode, she cried herself to sleep thinking about what people would think or say.

Even today, it’s something that gets Hollman worked up.

“I still get emotional. I am so ridiculous,” Hollman says, as her eyes begin to well up. “It was something that happened a long time ago and, when it came out, I just said it without really thinking, ‘Oh, my gosh, I'm going to have to deal with it.’ Talking about it in front of cameras and people that you're super close to and then having the world know that about you are very different things. People can be so judgmental that I was afraid that they would think I was crazy or ...

Hollman says she remembers dealing with depression from a young age. When she was 5 or 6, she recalls stealing her grandfather’s church offering. When her mother found out, Hollman says she couldn’t shake the shame.

“I just remember feeling so ashamed and not being able to get out of my head about how horrible that was,” Hollman says. “I feel like I grew up so religious that sometimes you don't realize that people aren't perfect. I don't know. I just always felt like I was going to go to hell for something.”


“I feel like I grew up so religious that sometimes you don't realize that people aren't perfect. I don't know. I just always felt like I was going to go to hell for something.” – Stephanie Hollman


Hollman still goes to church, but only once a week, she says with a cackle.

Today, Hollman is one of the only Dallas housewives who doesn’t have a profitable brand or dog food company or a line of merchandise.

But she has considered going back into social work.

“I don't know if I would want to work for another organization, but I'd love to start something of my own one day,” she says. “I think that would be amazing. … I want to make a difference in things that impact me and, for me, it's children and bullying. Because I have two kids and I feel like I just want to do something powerful that will change their world, too.”
KEEP THE DALLAS OBSERVER FREE... Since we started the Dallas Observer, it has been defined as the free, independent voice of Dallas, and we'd like to keep it that way. With local media under siege, it's more important than ever for us to rally support behind funding our local journalism. You can help by participating in our "I Support" program, allowing us to keep offering readers access to our incisive coverage of local news, food and culture with no paywalls.
Make a one-time donation today for as little as $1.