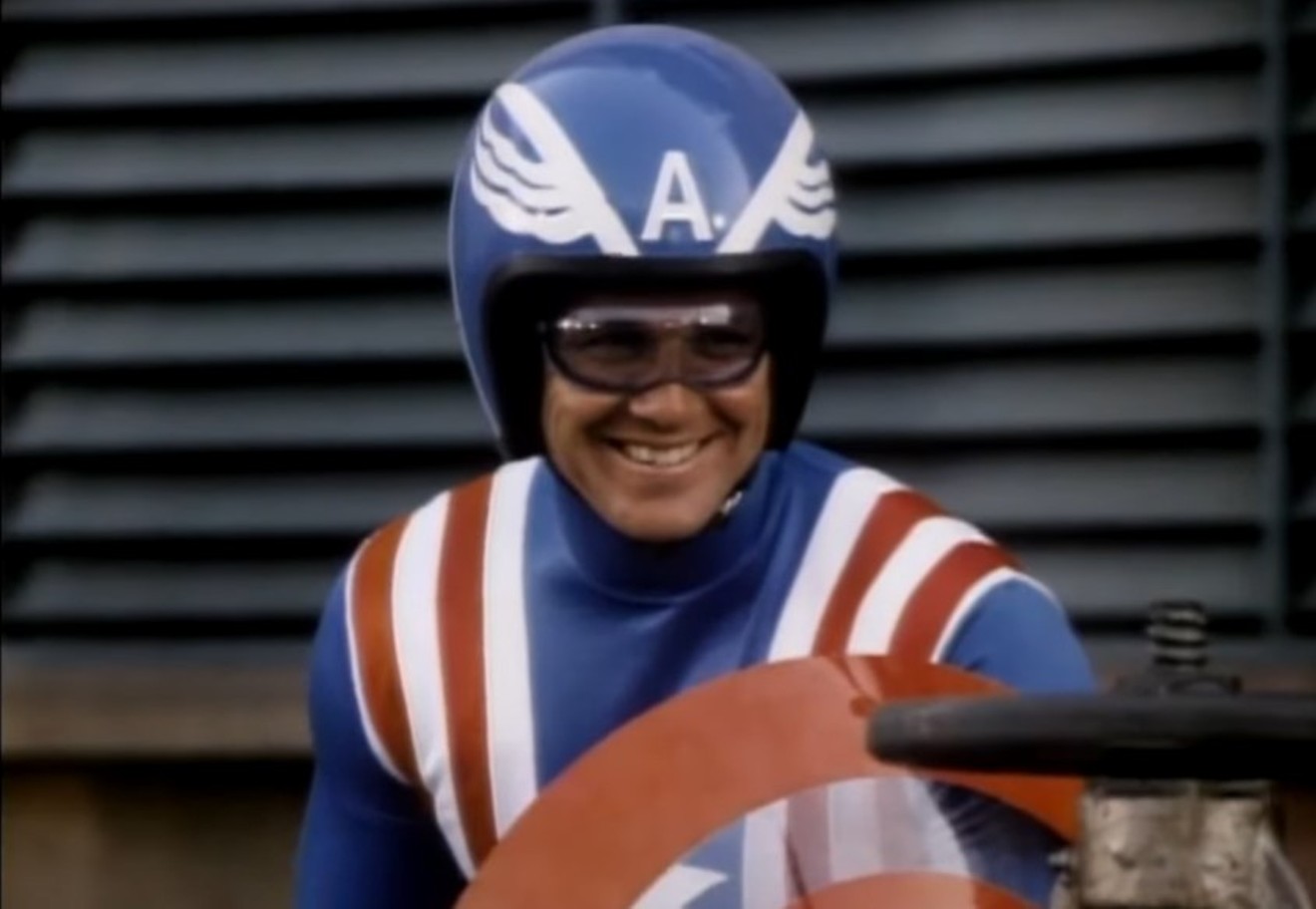 Reb Brown plays Captain America in a cheesy 1979 CBS adaptation of the Marvel Comics character. Screenshot from JoBlo Movies
The release of Black Panther: Wakanda Forever, the sequel to the Oscar-nominated film Black Panther starring the late Chadwick Boseman, represents a new step for the most successful movie franchise in Hollywood history. Beside being one of the biggest cash rakes in the history of film, Marvel movies are also turning into a new form of Oscar bait.

It's an impressive feat for any film franchise. It's even more impressive when you watch some of the first films that launched the Marvel franchise. Some of them make the Fantastic Four reboot look watchable.

The history of Marvel Comics movies goes all the way back to 1944, just a few years after the first Marvel Comics issue was published under the Timely Comics label. The first Captain America started as a black and white serial that largely ignored everything about the comics except for the fact that the hero wears a full head mask with a giant "A" on the forehead like some star-spangled scarlet letter.

The Cap battles enemies like generic gangsters and villains who would have felt more at home in the 1960s-era Batman series. At least it came out at a time when someone could enjoy a movie based on a comic without feeling pressured to hate it from comic book fans who treat the source material as sacrosanct as the Old Testament.
These films didn't even come close to making back their budget, which may explain why it took more than 40 years for any studio to risk bringing any other Marvel Comics characters to life.

In the late 1970s, CBS started greenlighting live-action remakes of Marvel adventures, starting with the mystic maven Dr. Strange. It starred British actor Sir John Mills in the title role and followed most of the doctor's comic book origin story — probably because Marvel Comics writer Stan Lee was heavily involved in the production. Unfortunately, it didn't garner much of an audience because it aired opposite the powerhouse made-for-TV film series Roots. The film went on to become an early cult classic among Marvel fans, and it was just released on Blu-Ray.

The film offers Dr. Strange battling the evil Morgan Le Fay, played by the late actress Jessica Walter, best known for her roles on Arrested Development and FX's Archer. Le Fay's character comes from the Arthurian legends as a dark sorceress who studied under the famed wizard Merlin. She projects her spirit across different time periods to become part of modern-day storylines. Walter's performance as Le Fay was the first Marvel Comics villain to get a film or TV adaptation.
The same year saw some absolutely abysmal TV adaptations of some of Marvel's Avengers members, such as Spider-Man and Captain America. Spider-Man Strikes Back stars Nicholas Hammond, who played Fredrich von Trapp in The Sound of Music, as the famous web slinger in a super low-budget adaptation — even for the standards of a major network production.

Peter Parker's "Spidey sense" looks like someone shoved a pair of Christmas lights into his eyeballs. Spider-Man's webs look like streams of Silly String morphing into capture nets. Some of the stunts, however, are pretty impressive, as stunt actors swing across buildings and even hang from a helicopter in a full Spidey suit.
The movie played out as a two-part film, presumably to gauge whether the production could be developed into some kind of made-for-TV film series. It was successful enough to garner a theatrical release in Europe and earned a green light for a second live-action Spider-Man film the following year. It also led to an even more laughable adaptation of Captain America in 1979 starring Reb Brown as Steve Rogers.

This film's production value is even lower than that of the Spider-Man movies. The Cap looks like he got his costume from a Kawasaki dealership. The film does follow the hero's origin story as he gains his powers from an experimental serum, but in the script it's referred to as "the ultimate steroid." Yes, this Captain America got his superpowers from steroids. Could there be anything more American than a national hero with a drug problem?  The only Marvel series or movie to gain any steam during the 1980s was the series The Incredible Hulk, starring Bill Bixby, which ran for five seasons starting in the late 1970s and prompted six movies by 1990. During that time, however, two Marvel properties would get turned into films with huge releases that became more famous for how much they failed.

The first came in 1986 with director George Lucas' infamous adaptation of Howard the Duck, an epic bomb that starred Lea Thompson and Tim Robbins. The Howard the Duck comics were some of Marvel's first attempts to create comedic comic books with a wisecracking, cigar-chomping character who is transported from his duck dimension to modern-day Cleveland by an evil demon named Thog. The film clearly has reverence for the character and attempts to explore edgier territory in a medium dominated by mythological hero adventures, but the execution is laughably bad and not in the way Lucas probably intended. The test screenings were so bad that Universal executives Sid Sheinberg and Frank Price got into a fistfight over who was responsible for this mess.  The other infamous Marvel movie bomb landed in 1994 with a film adaptation of The Fantastic Four that  never got released. B-movie maven Roger Corman — who mastered the art of low-budget, rapid-release movie-making with cult classics The Little Shop of Horrors, Piranha, Death Race 2000 and The Masque of the Red Death starring Vincent Price — got involved when a dispute over rights forced the film adaptation into production.

Superhero movies started a new renaissance in the late '80s thanks to huge hits such as Tim Burton's Batman. Demand for Marvel movies, however, wasn't nearly as high and favored smaller-budget studios like the German outfit Constantin Film. According to Den of Geek, the German studio's deal with Marvel for the rights to a Fantastic Four film would've ended on Dec. 31, 1992, if a finished film had not been produced by then. The studio had less than a week to produce such a feature, so they hired Corman's New World Pictures to put together a Fantastic Four film that looked slick enough for release but could be completed in a short amount of time.

The film's story is reverent to the comic book's versions but it's got Corman's signature touches of breakneck speed, producing the best-quality possible film in ridiculously short amounts of time and with next to no budget. If anything, it's still WAY better than the last time Marvel tried to reboot the Fantastic Four into a film, and they had all the time and money in the world to make it such a huge failure.