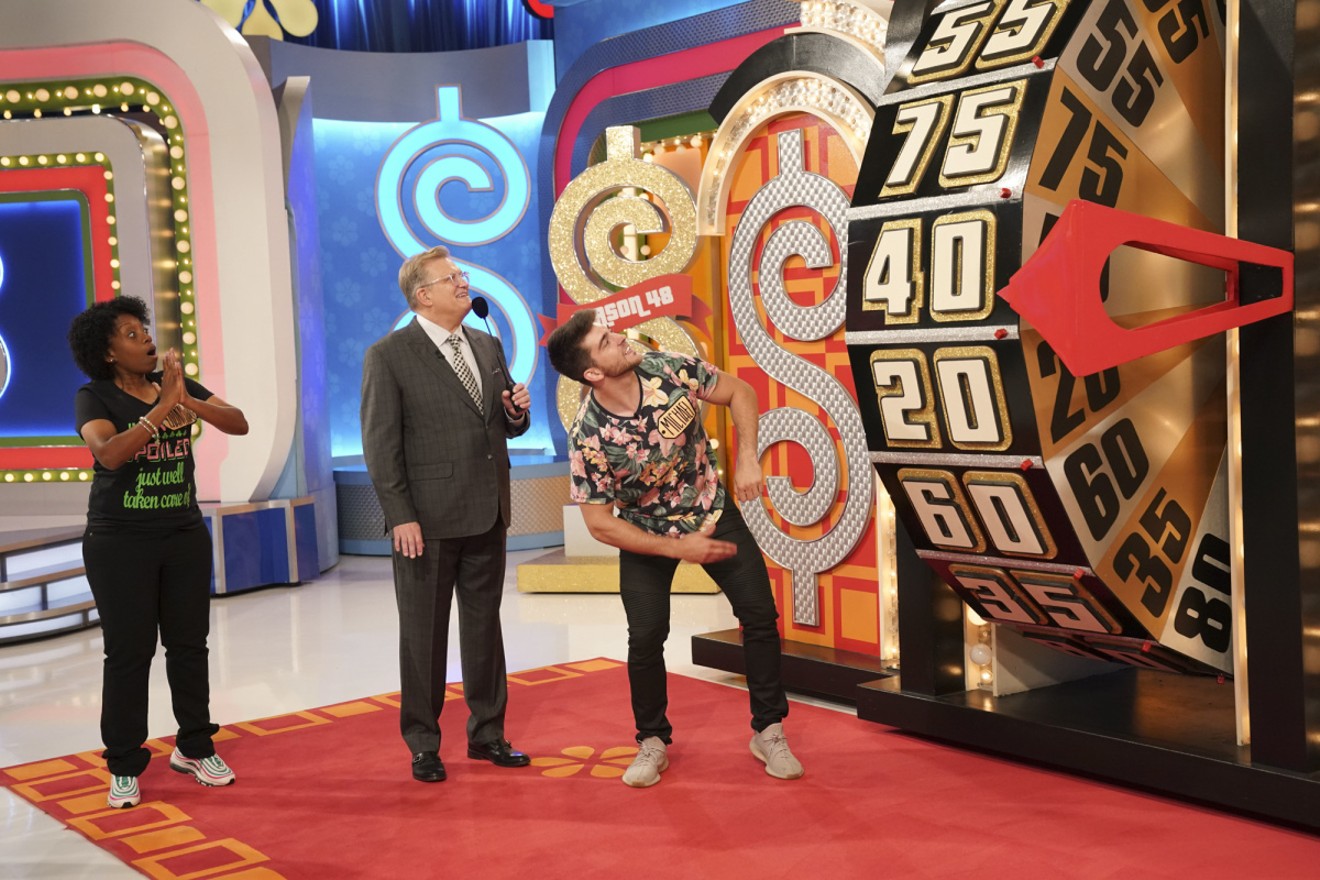 A contestant on the long running CBS game show The Price is Right hosted by Drew Carey, middle, spins the big wheel during the Showcase Showdown. courtesy ViacomCBS Press Express
The Price is Right has been on the air for 50 years. Just let that sink in for a moment.

Generations of retired grandparents, kids on sick days and people in hospital waiting rooms have seen at least one episode of TV's longest-running game show. There are more episodes of The Price is Right (9,256, according to the IMDB) than there are identified amphibian species (approximately 7,650, according to the non-profit conservation group The EDGE of Existence) on the Earth right now.

The truly great thing about the iconic show is that anyone can get on The Price Is Right simply by showing up to a taping. Every contestant either gets a ticket online or shows up and waits in line outside the Television City studio in Los Angeles, where they will get herded into the studio as staff put one of those yellow, price tag name tags on their shirt and producers pluck people to play pricing games right out of the audience.

That's hard to do if you don't have an economically viable way to get to Television City from places like, oh, let's say Dallas. That's why the producers of The Price is Right are bringing the show to us.

Part of the game show's 50th-anniversary celebration includes a live "Come on Down!" tour that will stop somewhere in Dallas on Thursday, April 7 as part of a 50-city tour across the country, according to ViacomCBS.

The tour will include some of the show's most beloved and memorable pricing games and that big-ass wheel from the Showcase Showdown in which three lucky contestants try to get as close to $1 without going over in just two spins or giving themselves a hernia while trying to spin it.

And yes, there will be Plinko, the most revered pricing game on the show in which players drop a chip down a slanted pegboard for a chance to win up to $10,000 per chip. Plinko is the John Lennon of The Price is Right. There is no Price is Right without Plinko. Plinko loves you.

The tour stop is more than just an opportunity for selfies with the wheel. The people in attendance will also get a chance to compete for prizes (it's probably too much to hope for just straight-up cash). The show will also support "beloved local business partners whose history is deeply tied to 1972, the year The Price is Right premiered," according to the press statement.

The exact time and location of the Dallas wing of The Price is Right's Come on Down tour isn't known, but the announcement did mention that the tour would take them to "uniquely American landmarks" such as the Gateway Arch in St. Louis and the "World's Largest Basket" in Newark, Ohio located just outside of Cleveland, the hometown of the show's current host Drew Carey.

We don't care where The Price is Right decides to hold its live tour stop as long as it's a place that truly showcases the beauty and artistic contributions of the city of Dallas to the American legacy and landscape, and it's not AT&T Stadium.
KEEP THE DALLAS OBSERVER FREE... Since we started the Dallas Observer, it has been defined as the free, independent voice of Dallas, and we'd like to keep it that way. With local media under siege, it's more important than ever for us to rally support behind funding our local journalism. You can help by participating in our "I Support" program, allowing us to keep offering readers access to our incisive coverage of local news, food and culture with no paywalls.
Make a one-time donation today for as little as $1.