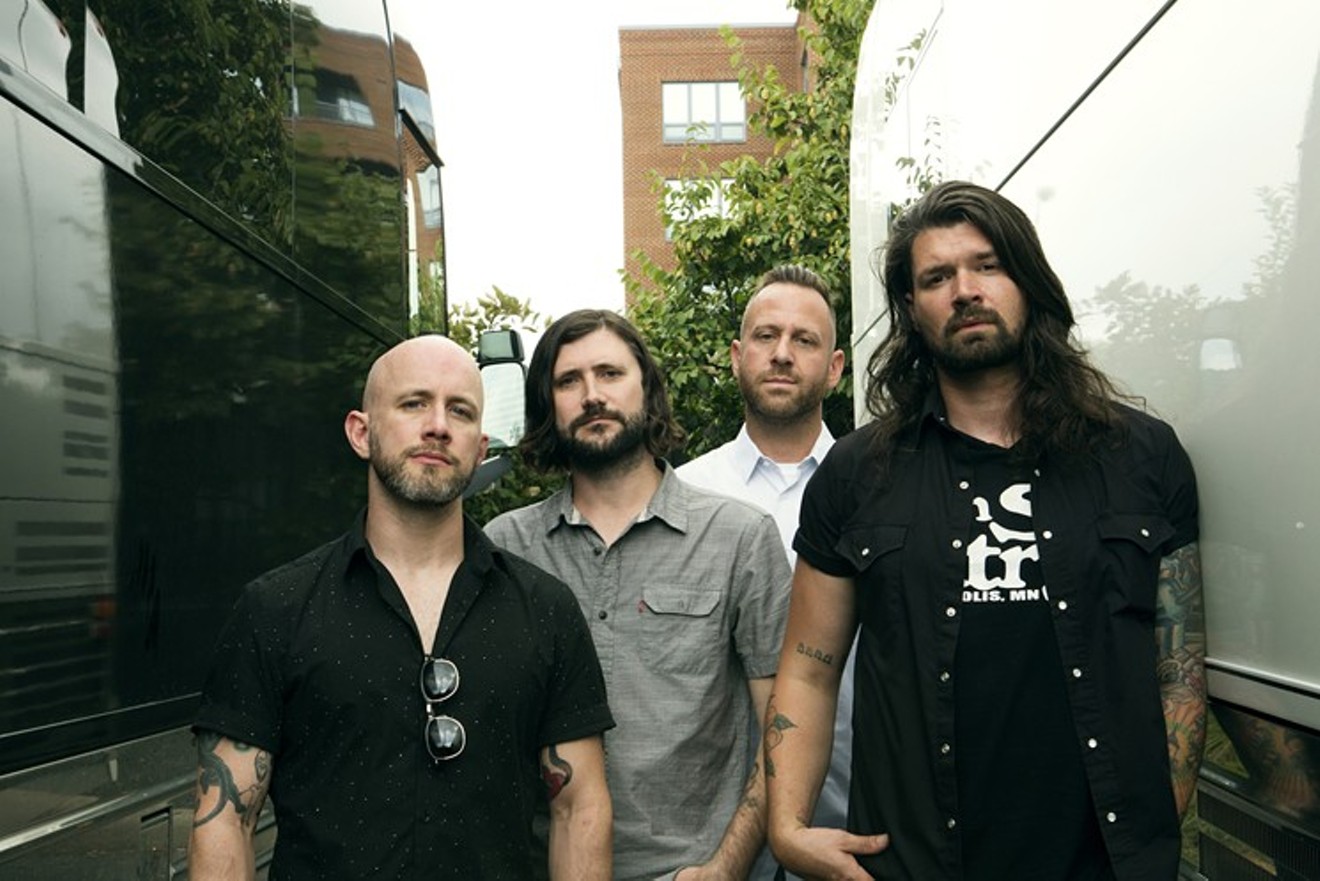 Taking Back Sunday is in town. Natalie Escobedo

To bike or scoot? That’s the big question when it comes to the annual Rockers vs. Mods weekend, kicking off from 6 to 9 p.m. Friday with a meet-and-greet at Belmont Hotel, 901 Fort Worth Ave. Bikers and scooters — many decked in leathers and vintage gear — will then ride to No Me Gusta! Social Club before meeting up Saturday morning at Moto Liberty for a little socializing, moto-gabbing and browsing the scenery before a group ride to Lee Harvey’s. The Drawer Devils, Mack Stevens and The Snap will perform before the annual bike/scooter awards are doled out. Sunday, attendees can gather for breakfast at AllGood Café before a long ride ending at Dubliner Dallas. Rally registration is $25, and tickets for the 1964 Honda Dream Shriner bike raffle are $10. Both are available, along with a detailed schedule, at rockersvsmods.com. Merritt Martin

Nobody endures like Selena. The faithful still flock to Graceland to see Elvis’ domain and Michael Jackson’s fans still present a united front for their King of Pop, but neither of them has ever seen the likes of the great grocery bag debacle of 2018. In the spring of that year, fans swarmed Texas H-E-B stores Black Friday-style for limited-edition reusable bags adorned with Selena’s face, leaving an aftermath of depressing YouTube fight videos and jacked up eBay price tags. And this all happened nearly a quarter century after the Tejano/pop idol’s death. The singer, who managed to be both melodramatic and infectiously cool at the same time, left a legacy of style and rhythm that still inspires. Which you know because, admit it, you still crank “Bidi Bidi Bom Bom” when it comes on in the car. 214Selena pays homage to the beloved singer with a three-day event beginning at 6 p.m. Friday at the Oak Cliff Brewing Co., 1300 South Polk St., with 214Selena Karaoke Night. The free, all-ages event kicks off the rest of the 214Selena slate of events including an art show and a handful of parties and celebrations. To learn more, visit the 214Selena Facebook page at facebook.com/pg/214Selena/events. Jennifer Davis-Lamm

Beer fans, aka humans, can tap into rare and unique brews along with a foamy flood of other craft beers this Friday and Saturday at the Big Texas Beer Fest. Dallas' oldest annual beer celebration will bring more than 100 brewers and 450 beers to the Fair Park Automobile Building, 1010 First Ave. Tickets to the festival tend to sell out, but they were still available at press time. Find them along with a list of participating brewers at bigtexasbeerfest.com. Tickets for Friday's session are $35 in advance and $50 at the door and $39 for GA Saturday, but VIP tickets for Saturday have already sold out. Non-VIP festival hours are 7-11 p.m. Friday and 2-6:30 p.m. Saturday. Patrick Williams

Atlanta-based rapper Jay Wayne Jenkins, better known as Young Jeezy or even just Jeezy, has been a trailblazer on the hip-hop and trap music scenes for quite some time. As an astute observer of urban landscapes and the lives lived in them, his songs have made strong impressions not just on critics and fans, but on a burgeoning scene of trap artists, as well. Rae Sremmurd, Migos and Trey Songz have all cited him as an influence. with Trapboy Freddy, 8 p.m. Friday at Gas Monkey Live!, 10110 Technology Blvd. E., $20 and up. Jeff Strowe

The 2019 Dallas Art Dealers Association invites art fans, collectors, artists and the public to its annual Spring Gallery Walk, spanning over 20 galleries and cultural centers throughout DFW. This free, self-paced event affords art enthusiasts the opportunity to experience dozens of special exhibitions, gallery openings, art talks, receptions and workshops all in one day — including a silent auction for the Edith Baker Art Scholarship Fund, which supports emerging young local artists. Things kick off at noon Saturday and end at 8 p.m., with exhibitions and events happening all across the area. The DADA Spring Gallery Walk is free. Find more info at dallasartdealers.org. Jonathan Patrick

Odd Fest Deep Ellum will host some of Texas' best folk artists in the parking lot of Trees, 2709 Elm St., at 10 a.m. Saturday. The event is free to attend, but there will be vendors, drinks, live music and raffles, and all proceeds go to help restore Odd Fellows No. 80 in Waxahachie. The current Odd Fellows building was built in 1891 and the lodge has been meeting there since 1912. Visit the Odd Fellows No. 80 Facebook page for more information. Paige Skinner

Dallas artist Wanz Dover claims to have over a decade and a half’s worth of recorded music in the can. The time has come for these tunes to see the light of day, so in an innovative bit of methodology, he’s releasing 12 EPs of the material over the course of 2019. As that translates to a release every month, it seems as though his fans will have a plentiful year of listening ahead. The releases so far have featured healthy doses of slinky and dance-oriented post-punk with lyrics that focus on the plight of the marginalized and the oppressed who are struggling to get by in our current state of political and social unrest. Catch Wanz and his band roll through some of the tunes in the friendly confines of a hometown venue. 9 p.m. Saturday at Tradewinds Social Club, 2843 W. Davis St., free. Jeff Strowe

News hit last week that legendary post-punk band The Cure is finalizing recording their first album in 10 years. To get acquainted with or refresh your memory of the band's extensive musical catalog before the album's release (which has so far been reported as "soon"), check out Le Cure – the Dallas-based Cure tribute band that's, like, really, really good. They're playing at Unlawful Assembly Brewing Company in Legacy Hall, so if you throw back a couple of beers, it's sort of impossible not to assume it's the real Robert Smith and the gang. 9 p.m. Saturday at Unlawful Assembly Brewing Company, Legacy Hall, 7800 Windrose Ave., free. Diamond Rodrigue

Netflix has given many great comedians audiences they could never have achieved without the streaming service. Ali Wong, who will perform Sunday and Monday at the Winspear Opera House, 2403 Flora St., is one of its biggest success stories. She was already a successful comedian and familiar face on shows like Chelsea Lately but her 2016 comedy special Baby Cobra turned her into a comedy icon. The following year, she became the first performer to sell out eight straight shows at the SF Masonic Auditorium in San Francisco. Last year, she released her second critically acclaimed and high-rated Netflix special Hard Knock Wife. She's also starring in an animated series for Netflix called Tuca and Bertie alongside Tiffany Haddish and will star in her first film for the streaming network. Wong's shows are at 7 p.m. both nights. Tickets are between $39.50 and $69.50 attpac.org. Danny Gallagher

One man's trash is another man's treasure — for about three months, then it's trash again. At least that's our experience with yard sales. But Lola’s Rock ’n’ Roll Rummage Sale will be more like a trailer park sale because it happens at noon Sunday at Lola's Trailer Park, 2735 W. 5th St. in Fort Worth. The event promises collectibles, original art, vintage things, vinyl and any other weird thing that might be in a dead aunt's home (except, probably, her corpse). There will also be live music and food trucks. The event is free and animal- and child-friendly. Visit the Facebook event page for more information. Paige Skinner

Taking Back Sunday is a band living in two different times. After releasing their seventh studio album in 2016, Tidal Wave, the band had clearly entered a new era in their careers. Taking measures to push the boundaries, sounding more like traditional rock music with each track, yet they still could be recognized as the band that wrote “MakeDamnSure.” But in 2019, Taking Back Sunday is relishing the nostalgia after 20 years as a band. Their latest release is a questionably collated compilation album titled Twenty, featuring between two and four tracks from each of the band’s seven albums as well as two previously unreleased songs. Luckily though, Taking Back Sunday’s second show here in Dallas is shaping up to be more exciting than the prospect of a compilation album in the age of Spotify and iTunes. The band has told the Observer that on the night in question they plan to flip a coin to see whether they play 2004’s Where You Want to Be or 2006’s Louder Now. No matter the result, fans can expect to hear some of the band’s best songs, even as they seem poised and ready to leave the past behind and move forward. 8 p.m. Sunday at House of Blues Dallas, 2200 N. Lamar St., $35 and up at livenation.com. Nicholas Bostick
KEEP THE DALLAS OBSERVER FREE... Since we started the Dallas Observer, it has been defined as the free, independent voice of Dallas, and we'd like to keep it that way. With local media under siege, it's more important than ever for us to rally support behind funding our local journalism. You can help by participating in our "I Support" program, allowing us to keep offering readers access to our incisive coverage of local news, food and culture with no paywalls.
Make a one-time donation today for as little as $1.