Waco Sheriff Speaks Highly of Jeff Bridges, Who's Up for an Oscar for Playing Him 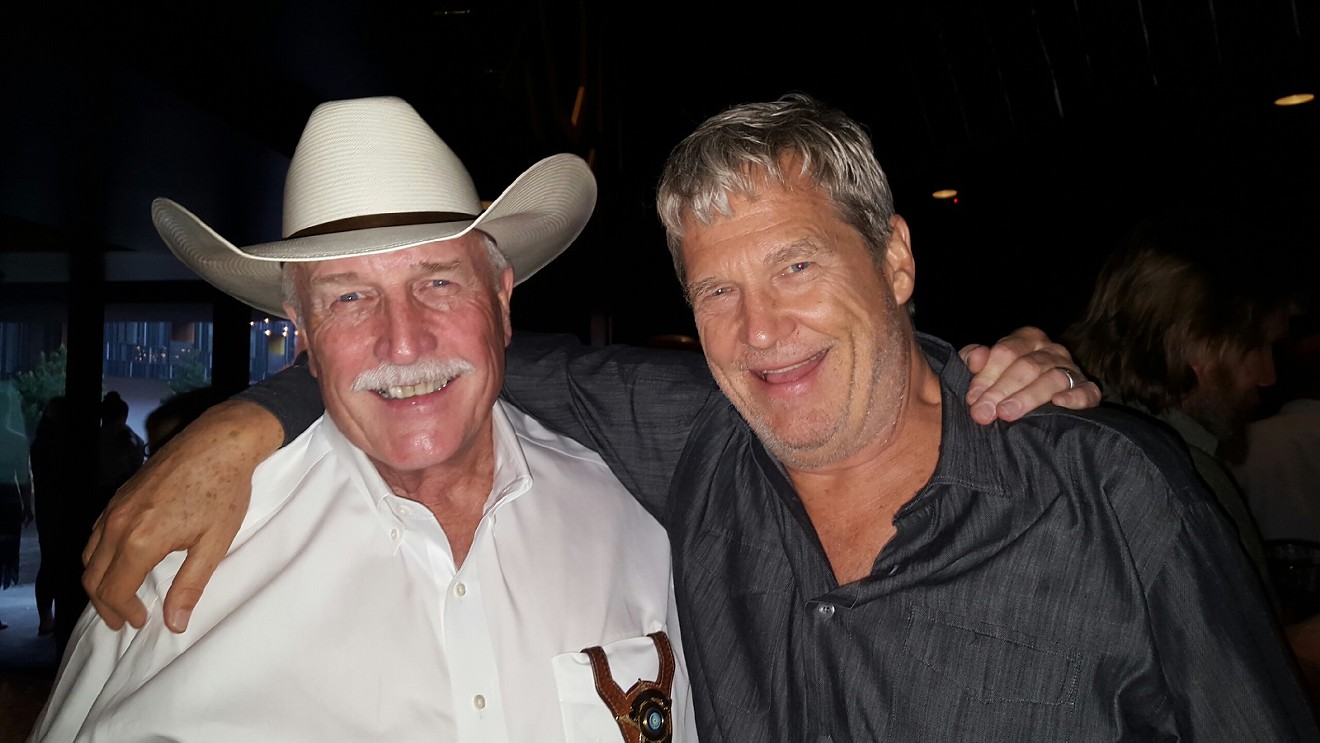 “I put him on speaker phone, and I got three of my captains and my secretary in the office to listen because I didn’t think anybody would believe that I really read a script with Jeff Bridges,” McNamara says. “He was just so down to earth and such a cool guy, and so I read his part and he read the bank robber’s part. I enjoyed that very much. It was really cool.”

Jeff Bridges plays Marcus Hamilton in Hell or High Water, a character based on McNamara. The movie is up for four Academy Awards, including a nomination for Bridges for actor in a supporting role. McNamara’s cousin, Taylor Sheridan, wrote the screenplay and based the Texas Ranger on McNamara, who says he was “flattered and honored” when he found out about the character.

Hell or High Water is about two brothers, one an ex-con and the other a desperate family man, played by Ben Foster and Chris Pine respectively. The two rob several West Texas banks to pay back the mortgage on their dead mother’s farm and Bridges and Gil Birmingham play the two Texas Ranger partners trying to catch them. Bridges’ character is about to be forced into retirement — something McNamara faced when he had to retire from being a U.S. marshal at 57.

Jeff Bridges as Marcus Hamilton, a character based on Waco sheriff Parnell McNamara, in Hell or High Water.
screen shot of Hell or High Water trailer
McNamara and Bridges talked 10 or 15 times over the phone, McNamara recalls, to discuss things such as how to carry a gun and wear a hat. McNamara remembers Bridges once asked where he would put his gun after retiring. Bridges thought the boot might be the best place, says McNamara, who corrected him.

“You’ve gotta have time to bend over, pull your pants leg up, dig your gun out of your boot, and by that time, the bad guy’s shot you in the top of the head three or four times while you’re bending over,” McNamara told Bridges.

Instead of the boot, McNamara advised Bridges to put the gun in his shirt during the scene. “At the end of the movie, if you’ll notice, he’s already retired, he’s fixing to go talk to one of the bank robbers, the surviving brother, and he undoes his shirt and he sticks his gun in there, and I’m sitting there watching the movie, and I’m telling my wife, ‘My gosh, that’s exactly where I told him to keep the gun.’”

McNamara thinks the movie accurately portrays Texas law enforcement, with no Hollywood hype or big car pile-ups. “It was just a dedicated lawman going after the bad guys,” he says.

Hell or High Water might look like a typical Western movie where the good guys chase the bad guys, but there are more sides to it and the characters than that. While the brothers are robbing the banks, they are still trying to save their family’s farm. And Pine’s character, Toby Howard — who is a little “down and out,” as McNamara puts it — is trying to pay off child support and help his family.

McNamara on the press circuit with actor Chris Pine, who plays one of the bank robbers.
Courtesy Parnell McNamara
Bridges’ character is also multifaceted. He seems a bit lost thinking about his upcoming retirement, believing he still has a lot to offer in law enforcement, but also has a mean side that comes out, such as when he uses racial slurs in conversation with his partner. But overall, McNamara thinks the character is a good guy.

“He was a dedicated lawman. I didn’t see any bad side to him. He would do some racial slurs to his partner, but that’s kind of the way it is in police work. People joke back and forth and it’s all in good fun,” McNamara says.

In fact, McNamara closely identified with the relationship between Hamilton and his partner. It reminded him of the relationship between him and his brother, who was his U.S. marshal partner for 30 years. "It brought back to me a lot of things that my brother and I did in our law enforcement career and how we worked together on different cases, and I just saw him a lot throughout the movie," he says.

McNamara’s brother died in 2015 from a heart attack, and he says Bridges called to offer his condolences. "In the scheme of things, I'm a little guy and he's way up there," McNamara says about his and Bridges' relationship. "He was so nice and kind to me. He called me and talked to me for 10 to 15 minutes and was just telling me how sorry he was that I lost [my brother]. It meant a whole lot to me and it showed me what kind of person he was."