Women Skateboarders in Dallas Form an 'Above Average' Group 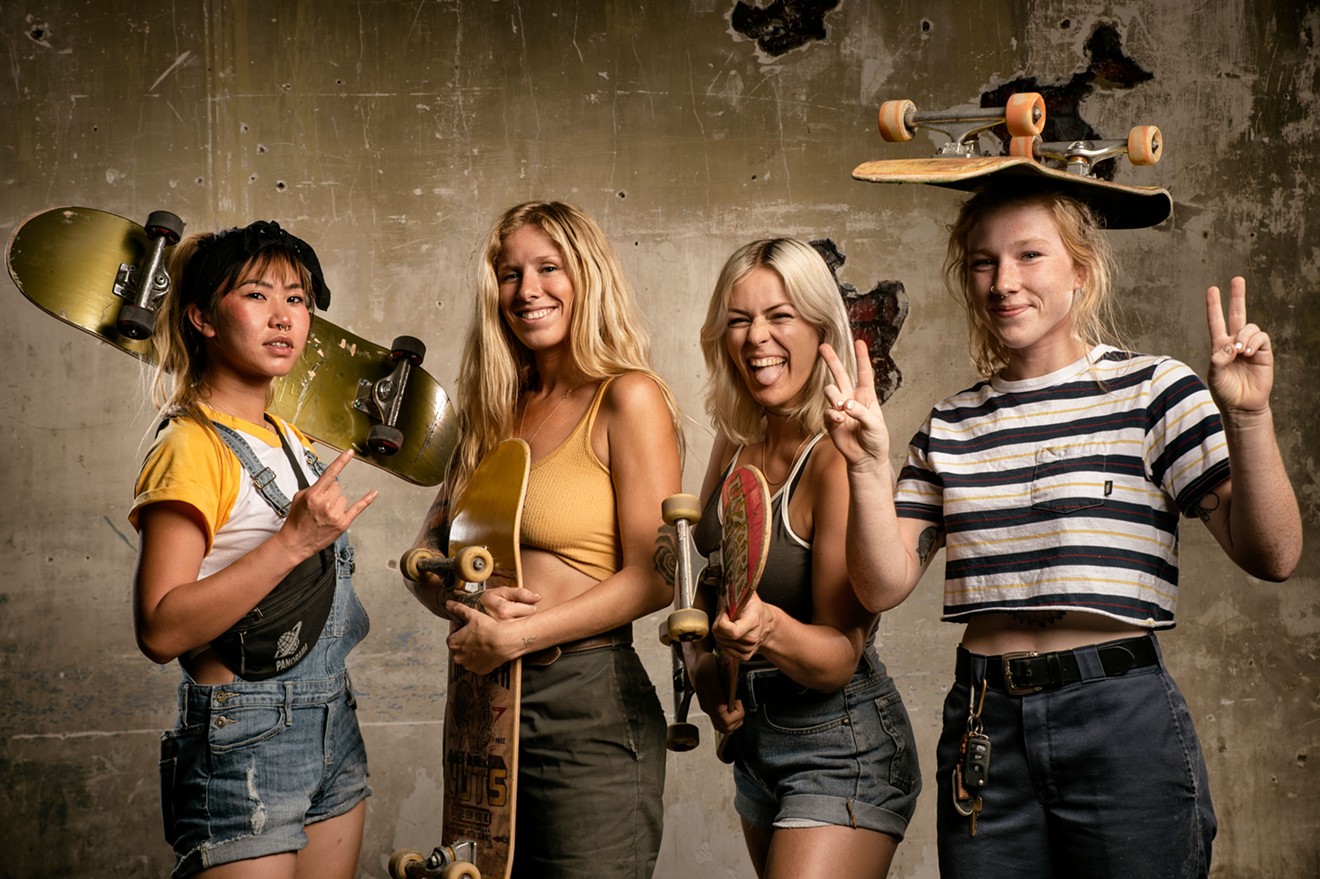 The group doesn't have a name, but if they had one, you should know it. Erick Johnson
Sidewalk objects such as stairs and benches can seem commonplace, or even an impediment, on our everyday walks. Through the eyes of a skateboarder, however, those same objects can take on a sort of mythology. Such has been the case since skateboarding’s rise from street hobby to an integral part of American culture.

It all started with a series of unassuming benches and ledges in San Francisco, which rose in status from “Bench that no one used” to “I wonder if I could jump across that,” to being co-opted as part of skateboard hot spots like 3rd & Army.

One of the most famous instances of elevating the mundane came from skateboarder Jamie Thomas, whose 1997 stunt "ollieing" (a trick in which riders and boards jump in the air without the riders using their hands) off a 17-foot staircase at a San Diego high school became the stuff of legends. The jump is now referred to as the “Leap of Faith.” Although Thomas never landed the leap, he raised the bar through his ambition.

A group of Dallas’ finest skaters is now attempting to do the same: elevate the standards, breakthrough and break shit in their own way, with their recently released skate video Above Average. Oh, and they’re all women.


"Women skaters get it. ... They don't take shit from anyone; they’re there to skate.” – Lauren Habony

The long and arduous path to this release began when the visionary behind the video and de-facto leader of this new skater clique, Lauren Habony, broke her arm. After dealing with the initial trauma of the bone fracture, Habony's doctor proposed amputation, which only seemed to add insult to injury.

Reacting as only a skater could, Habony experienced a reinvigorated lust for life and will to get back out and skate. She decided to take a hiatus from the tricks and instead bought a big, mid-1990s-era camera that records straight to tape, in hopes of recording her friends skating as her body healed. This project laid the foundation of what would later become Above Average, a short documentary film depicting the group's love of skateboarding.

On a recent hot day in Dallas, Habony sat down at a Deep Ellum bar with three of the 12 skaters featured in the video: Katy Beth Berry, Tiffany Hoa and Zaida Frenzel, skateboards in tow, as well as Habony’s and Hoa’s sons.

“The women I follow in skateboarding have been around for years, and they’re moms now," Habony says
as the children galavant around. "It just goes to show … it makes sense, women skaters get it. They don't take shit from anyone; they’re there to skate.”

“I’m just stoked that I found a group of women that like to play in ditches with me … and eat shit," Berry says.

Being a woman in skateboarding isn’t as simple as it should be. In addition to dealing with the bumps and bruises that afflict skateboarders of any gender, women in skating have to deal with sexism from men in their field, the group members say.

A prime example of this misogyny happened in 2013 when, at the height of the sport’s popularity, AND while talking to what may be the most storied skateboarding magazine, Thrasher Magazine, professional skateboarder Nyjah Huston used his bully pulpit to say, "Some girls can skate, but I personally believe that skateboarding is not for girls at all. Not one bit."

Huston went on to issue an apology, though it bordered somewhere between ill-planned to insultingly patriarchal when he followed up by saying he'd only meant that he doesn't like the thought of girls like his little sister getting hurt.

While discussing these comments, Habony looks off, showing the giant scar on her left elbow that inspired her to buy the camera, which in turn inspired Above Average, and has since led to many great things in her life. She turns and says: “I’m a mother. I have a job. I have a life. And I skate.”

Hoa jumps in, adding: “When our feet touch a board, we feel liberated.”

“Skateboarding is the most inclusive thing I’ve ever been a part of," Hoa continues. "I’ve never been so comfortable being 100% who I am. Then there’s that rich dude skateboarder?” She asks hypothetically, positing that instead of there being no place for "girls" in skateboarding, as Huston suggested back when she was starting out, there's actually “no place for bigotry in skateboarding.”

Frenzel describes Above Average as a sort of home movie.

“It’s all about the vibe," she says. "You can organically capture the tricks, but it's about the love and support … the family."

“We’re friends. We skate. We filmed it,” Habony says.

Like Thomas’ “Leap of Faith,” the bails and fails of a skate video are just as important as the successes. You need them to appreciate the successes, to rally for the skater when they do eventually land that feat that marries physics and fate.

Par for the course, Above Average doesn’t disappoint on this front. You see falls, you see their feats, and the feeling you’re left with afterward is a sense of family, of love. You’re left with what adds up to an art film about the group's love for skateboarding and for each other.

“If you love something, give it everything you’ve got. Then more,” Habony says.

“If you don’t, maybe you aren't a real skateboarder,” Berry interjects with a shrug.

Habony agrees, “Then there’s that.”

Watch Above Average below: