First Look: The New Food Hall in Downtown Dallas Gets It Right 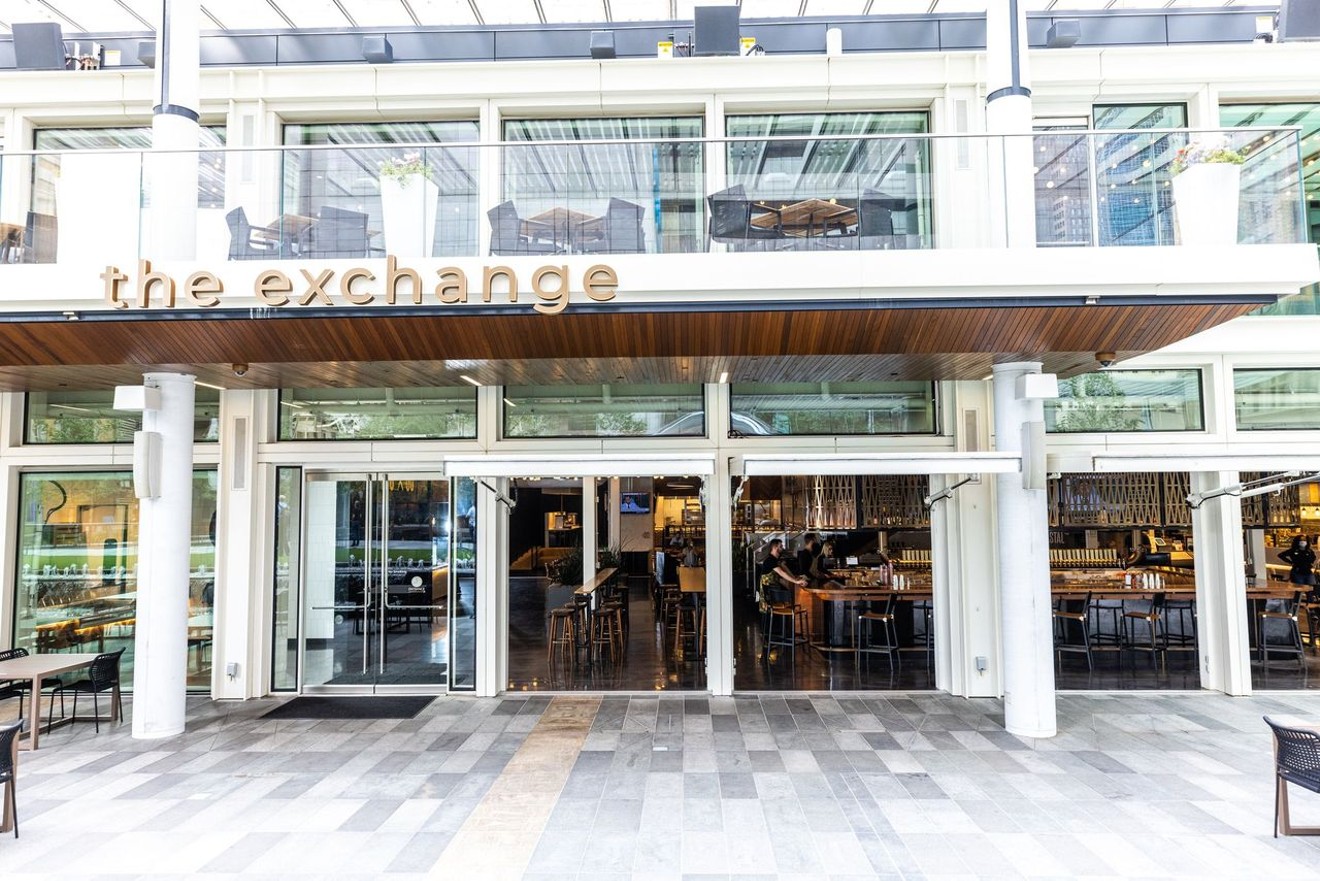 In recent years, food halls have been popping up, and although the excitement associated with their novelty has worn off, The Exchange gets right what a lot of these food halls get wrong.

Many of North Texas’ food halls opened in suburban cities, like Legacy Hall in Plano and the now-closed Urban8 in The Colony. As food stalls have come and gone in these halls, the glitz of them has dwindled. The Exchange’s central downtown location, along with its ample walking space throughout, plus an even mix of new restaurants and Dallas favorites make it a fun, agreeable place to hang out.

The frozen margarita swirl from Double Tap at The Exchange.
Alex Gonzalez
The Exchange offers 16 dining options, including Monkey King Noodle Co., Revolver Taco and Zalat, the latter of which will finally offer pizza by the slice exclusively at this location. Dessert options include La Duni, Val’s Cheesecakes and Press Waffle Co. On the second floor, you’ll find the more formal sit-down spots, including an Asian fusion restaurant called Ichi Ni San and a Texas-inspired brasserie called Ounce.

Each floor has its own bar; Double Tap on the first and Hard Shake on the second. At Hard Shake, you can try a variety of cocktails, including the sangria roja, made with hibiscus, ginger, strawberry, orange and apple and red wine ($12). Another cute choice is the Just Like Audrey Hepburn cocktail, made with Grey Goose Essence Strawberry, lemongrass, citrus, honey and sparkling rose ($14).

Downstairs at Double Tap, the frozen margarita with a sangria swirl ($13) is sure to hit you like a truck.

The overall aesthetic is composed of simple, dark colors, creating a more formal, loungy environment. While places like Legacy Hall appeal to families, offering different types of food that even the pickiest of eaters are bound to agree on, it’s clear that The Exchange is geared more toward the grown-ups.

The plaza area in front of The Exchange
Lauren Drewes Daniels
Whether you’re going for a night out with friends, taking a break from work downtown or visiting Dallas and want a taste of some of our best restaurants, The Exchange offers the best of Dallas in one convenient location. Although food halls have shown to be a hit or miss over the past few years, The Exchange seems promising.

The Exchange. 211 South Akard St. Open daily from 7 a.m. to 10 p.m., hours vary by vendor.
KEEP THE DALLAS OBSERVER FREE... Since we started the Dallas Observer, it has been defined as the free, independent voice of Dallas, and we'd like to keep it that way. With local media under siege, it's more important than ever for us to rally support behind funding our local journalism. You can help by participating in our "I Support" program, allowing us to keep offering readers access to our incisive coverage of local news, food and culture with no paywalls.
Make a one-time donation today for as little as $1.