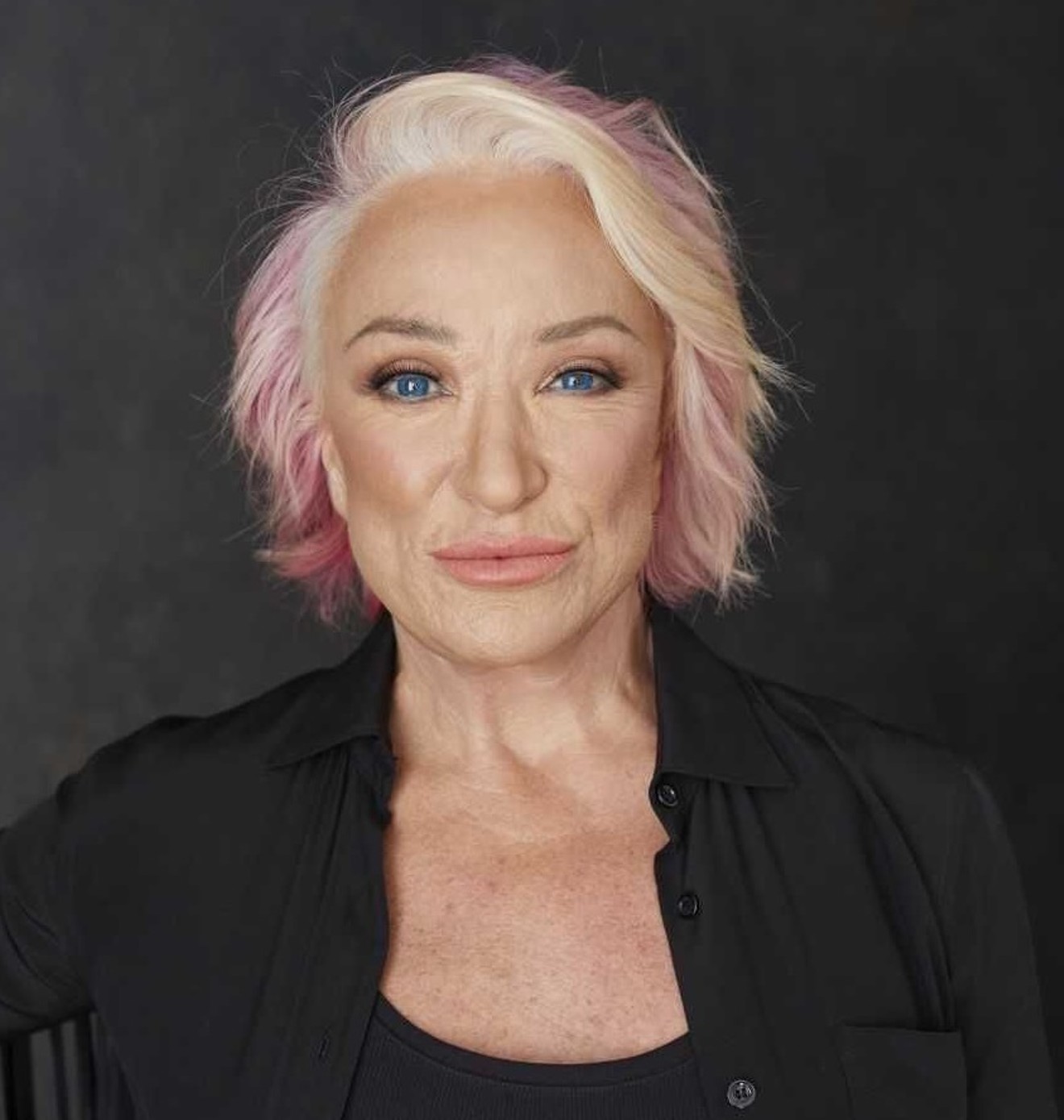 Tanya Tucker plays Friday, April 1, at Billy Bob's Texas. Danny Clinch
With spring in the air and COVID-19 protocols diminishing, it's starting to feel like the good ol' days again when you could just go be in a crowd and enjoy a show from some band, no matter who they were. With the Deep Ellum Arts Festival returning to its normal time of year, that feeling is made all the more real. In addition to the 100+ musical acts taking one of five stages at the festival, North Texas music fans can look forward to an absolutely packed week of shows, starting with space-rockers Spiritualized on Thursday night. Country music icon Tanya Tucker returns to North Texas Friday night, and metal legends Sepultura bring the intensity on Saturday. Also on Saturday, new artist Resting Scary Face celebrates the release of his first album in Denton. The rest of the weekend and into next week is centered on rock acts, The Darkness, Baroness and Fuzz. It's time to get back in action.
Spiritualized
7 p.m. Thursday, March 31, at Granada Theater, 3524 Greenville Ave., $39.50 at prekindle.com

In 1997, Radiohead released its career-defining album OK Computer, but as important as that album was, it was not the album NME named album of the year. That honor went to the English space rock band Spiritualized for its album Ladies and Gentlemen We Are Floating in Space. Critics praised the album for its bright, weightless and visionary approach to space rock, which had previously been defined by the thunderous guitar of Marc Bolan of T. Rex or the dark and heavy soundscapes of Pink Floyd. While those bands had foregrounded the subject of space, Spiritualized chose to foreground the texture of space in defining its sound. Through the years, Spiritualized has incorporated more sounds into its overarching style, such as gospel music on Amazing Grace or pop on Sweet Heart Sweet Light. The band will release its latest album Everything Was Beautiful on April 22.
Deep Ellum Arts Festival
11 a.m. Friday- Sunday, April 1-3, in Deep Ellum, Free

Back again at its regularly scheduled time of the year, this year's 23rd annual Deep Ellum Arts Festival will include more than 100 original bands and singer-songwriters representing over 15 music genres performing on five stages around the Dallas entertainment district. The lineup of local artists is so solid that there should be no concern about what you might run into, but for the perplexed, here is what we're looking forward to. Things kick off Friday morning with a set from ska-punk band Ex-Regrets followed by sets from Itchie Richie and the Burning Sensations, Vanilla & Pepper, Loyal Sally, Alex Lease and The Mammoths. As the weekend goes on, festival-goers can look forward to performances by country artist Sarah Johnson, hip hop fusion of Chilldren of Indigo, Primo Danger and Reverend Horton Heat. Additionally, the weekend will also host over 200 visual artists and street performers.
Tanya Tucker
10 p.m. Friday, April 1, at Billy Bob's Texas, 2520 Rodeo Plaza, $20+ at axs.com

At the age of 13, Tanya Tucker released her first hit single "Delta Dawn" after hearing Bette Midler perform the song written by Alex Harvey on The Tonight Show. Tucker's version became a top 10 hit on the country charts, but it was Helen Reddy who made the song a No. 1 pop hit the year after her first hit single "I Am Woman." Tucker has since credited her decision to record that song as the reason why she is a country singer today and not a rodeo queen. One of the very few child performers to make a lasting impression on country music, Tucker outgrew her pop-country origins to become a part of the Outlaw country movement in the late-'70s, combining the elements of rock and country music as heard in her 1978 single "Texas (When I Die)." For all of her fame and contributions to country music, it wasn't until 2020 that Tucker would win her first Grammy awards for "Best Country Song" and "Best Country Album" for "Bring My Flowers Now" and While I'm Livin'.
Sepultura
7 p.m. Saturday, April 2, at Amplified Live, 10261 Technology Blvd. E., $25+ at seetickets.us

Portuguese for "grave," Sepultura is a Brazilian heavy metal band formed in 1984 that has managed to stay relevant for nearly 40 years thanks to the band's openness to adapting and evolving with the sounds of heavy metal as they shift. Over the years, the band has combined elements of thrash, groove, death, alternative, industrial and even nu-metal into its arsenal. Though its only consistent member has been bass player and backing vocalist Paulo Jr., Sepultura has consistently released a new album every few years since its early days. The band's most recent album, Quadra, was released in early 2020, the concept of which was based on Quadrivium, the four arts — arithmetic, geometry, music and astronomy. The band divided the 12-track album into four sections of three songs and played a different kind of metal for each section.
Resting Scary Face
8 p.m. Saturday, April 2, at Rubber Gloves, 411 E. Sycamore St., Free

Standing on the outskirts of emo, indie-rock and hip-hop, Dallas artist Resting Scary Face self-released two EPs in 2020 and is now ready to reveal his debut, full-length release this Saturday at Rubber Gloves in Denton. Ever enigmatic, not just for his trademark white mask, Resting Scary Face's music is defies straight interpretation. Moving back and forth between self-loathing and self-aggrandizing statements, the artist's troubled voice grapples with connecting to the world around him. Rather than being a pity party, Resting Scary Face's music is a place for anyone who struggles in finding and creating their identity to find catharsis.
The Darkness
7 p.m. Sunday, April 3, at Granada Theater, 3524 Greenville Ave., $32.50 at prekindle.com

When The Darkness first emerged in the early-'00s, it came as a breath of air for those who had been craving a return to the arena rock of the 1970s.  What made The Darkness a standout band before was its breathtaking guitar solos and the impossibly high-pitched voice of lead singer Justin Hawkins. While Hawkins' ability to maintain his voice the way that he once could has shown some decline, it has given him the opportunity to explore the full range of his vocals. The band's latest album, Motorheart, came out in November 2021, and the group set out on a worldwide tour that brings them to the Granada on Sunday night.
Bon Iver
7:30 p.m. Sunday, April 3, at The Pavilion at Toyota Music Factory, 300 W. Las Colinas Blvd., $29.50+ at livenation.com

Over the last 15 years, Bon Iver, or more specifically its frontman Justin Vernon, has been at the forefront in defining the sound and feel of independent music. Starting with the band's first album, For Emma, Forever Ago, Bon Iver set the earthy tone that dominated indie music in the late-'00s alongside bands like Fleet Foxes and Blitzen Trapper. The band's eponymous sophomore album expanded upon that sound, adding a wide range of instruments to elevate the simple folk-rock of the band's early work. The band's sound changed again on 2016's 22, A Million, which added elements of electronic music and hip-hop production to what the band had been building in its first two albums. In 2019, Bon Iver released its most recent record i,i. The album divided critics, but that didn't stop the Recording Academy from nominating the album for "Album of the Year" at the 62nd Annual Grammy Awards.
Mattiel
7 p.m. Monday, April 4, at Tulips, 112 St. Louis Blvd., $15+ at prekindle.com

Supporting a brand new full-length album release, ATO recording artist Mattiel plays Monday night at Tulips in Fort Worth. Though the singer hails from Atlanta, Mattiel has seen the most success in the United Kingdom, where her second album, Satis Factory, received four-star reviews from British publications The Guardian, Q, Mojo, DIY, Uncut and The Times. For its latest album, Georgia Gothic, Mattiel took inspiration from other Georgia-based artists like R.E.M., Outkast, The B-52's and The Black Lips in the way each of those acts forged its own sound and identity outside of what was popular. Lauded by Jack White and drawing comparisons to Nico, Mattiel mixes elements of garage rock, psychedelia and just a little bit of country to bolster her icy alto voice. Mattiel has been known to perform an intoxicating set that is as entrancing as it is danceable.
Fuzz
7 p.m. Tuesday, April 5, at Trees, 2707 Elm St., $21 at axs.com

One of Ty Segall's many side projects, Fuzz formed in 2011 as a place for Ty Segall's Freedom Band guitarist Charles Mootart to let out some of his harder driving riffs. Segall takes to the background of this project, playing drums and contributing backing vocals. Over the course of the past decade, the side project has released three albums with the last two featuring Meatbodies bass player Chad Ubovich. The band's latest album, III, was produced by legendary producer Steve Albini at United Recording. The band's focus on the album was live-to-tape recording while minimizing studio magic and overdubbing. The result is a gritty and intense piece of work that has the sole purpose of rocking its audience to its very core.
Baroness
7 p.m. Wednesday, April 6, at Three Links, 2704 Elm St., Sold Out

Grammy-nominated exploratory rock band Baroness will play a small, intimate show Wednesday night at Deep Ellum punk venue Three Links. The show has been sold out for some time now, but a lucky few may still be able to snag a ticket at a resale site. Naming each of its albums after colors, Baroness released its most ambitious album, Gold & Grey, in 2019. The album mixes alt-metal hooks together with elements of jazz and progressive rock. While previous albums had showcased the band's impressive guitar talent, Gold & Grey showed the band's rhythmic complexity, highlighting the band's technical prowess. The band has said that Gold & Grey will be its last color-themed album. For the band's live shows, Baroness allows fans to pick its setlist, and with a sold-out crowd in front of them, its sure to be an enchanting evening for all in attendance.
KEEP THE DALLAS OBSERVER FREE... Since we started the Dallas Observer, it has been defined as the free, independent voice of Dallas, and we'd like to keep it that way. With local media under siege, it's more important than ever for us to rally support behind funding our local journalism. You can help by participating in our "I Support" program, allowing us to keep offering readers access to our incisive coverage of local news, food and culture with no paywalls.
Make a one-time donation today for as little as $1.