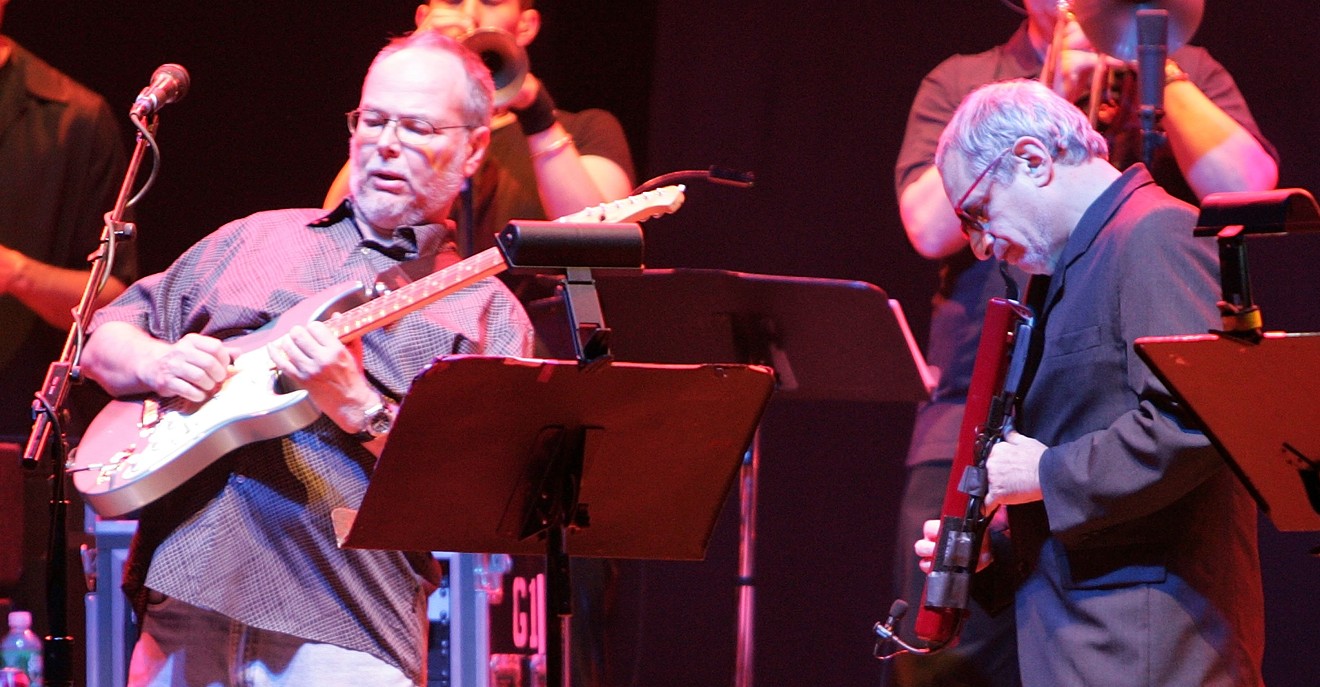 The years have been reeled for Steely Dan's catalog. Here are some songs you should know. Scott Gries/Getty
After a seemingly ludicrous two-year wait, jazz-rock troubadours Steely Dan will be bringing their Earth After Dark tour to the Dickies Arena on Thursday, June 2, with special guests Snarky Puppy. Previously announced opener Steve Winwood dropped out because of issues stemming from the pandemic and scheduling conflicts.

Steely Dan found great success in the 1970s with hits such as “Reelin’ In the Years,” “Rikki Don’t Lose That Number,” “Peg,” and many more, with a rich back catalogue extending far past the band’s typical radio staples.

“Aja” from Aja
Maybe not a true "deep cut," but certainly not a radio staple, the title track to Steely Dan’s 1977 masterpiece is their best non-hit. "Aja" is likely the high point of the band's entire career, not to mention one of the most well-realized musical suites of the 1970s. Featuring an explosive, career-best performance from drummer Steve Gadd backing a fiery solo from saxophonist Wayne Shorter, the song moves like the Santa Ana winds, carrying strains of thought and feeling through banyan trees, over hills, through clouds and down toward the dude ranch. The lyrics remain a total mystery; whether “Aja” is a literal woman of Donald Fagen’s dreams or some representation of tranquility — or even death — has yet to be answered. Eat your heart out, “Bohemian Rhapsody.” “Time Out of Mind” from Gaucho
Gaucho, the album that marked the end of Steely Dan’s tremendous run in the '70s, is a hyper-glossy anthology of Los Angeles' disgusting splendors: criminal basketball players, aging hipsters preying on younger women, and of course, awesomely terrible drugs. The song embodies all the excitement and anticipation of taking the plunge into that horrible world without a hint of trepidation. T his is probably the closest Steely Dan came to making a disco song. Substitute chasing the dragon for a bachelor party or a bar mitzvah and you practically have the family’s next favorite song. Not to mention Mark Knopfler from Dire Straits plays the guitar like a masseuse —  always hitting the right spots. “Chain Lightning” from Katy Lied
While a majority of Steely Dan’s body of work can be described as “cool,” there’s almost nothing cooler in their discography than this 1975 deep cut boasting a bluesy shuffle and Michael McDonald’s buttery harmonies singing “Hush brother, we cross the square, act natural, like you don’t care.” Add to that the fact that future Toto drum god Jeff Porcaro is laying down that groove when suddenly Rick Derringer swoops in on guitar from out of nowhere and plays a solo with the subtle badassery of Frank Bullitt buckling his seatbelt. Whether or not the song is about a Nazi rally as is rumored on the internet is beyond us, but “Chain Lightning” is too cool to worry about being misrepresented online. “King of the World” from Countdown to Ecstasy
Steely Dan’s music usually features (to say the least) shady characters in compromised or compromising situations, but their protagonists are rarely lonely. The raging closing track on their sophomore album Countdown to Ecstasy is a post-apocalyptic distress call from possibly the last man on Earth, begging anyone who might be out there to answer him, saying “Show me where you are; you and I will spend this day driving in my car, through the ruins of Santa Fe … Any man left on the Rio Grande is the king of the world as far as I know.”
“Haitian Divorce” from The Royal Scam
Steely Dan goes reggae! “Haitian Divorce” perfectly embodies Steely Dan’s knack for hypodermic lyrical jiu-jitsu. While yes, the song is obviously about a divorce, a closer look at its elements reveal the true soap opera absurdity at play. An overbearing father, a runaway bride and a hazy night of bad decisions in a strange land fed through an understated reggae groove featuring a sex scene via a talkbox guitar solo, and you get an extraneous baby, an awkward family reunion and one of Steely Dan’s most compellingly twisted sitcoms. “Pretzel Logic” from Pretzel Logic
A time travelogue? An indictment of the woes of touring? An erotic blues shuffle? Yes, please! The title track of Steely Dan’s third LP finds the band on the precipice of normalcy, peering out into the rich valley of studio wizardry. Walter Becker, up until this point primarily a bassist, lets loose with a flurry of confetti-like guitar leads, as the core Dan duo are augmented by a small army of session players including Jim Gordon on drums and future Eagle Timothy B. Schmidt on backing vocals. “Reelin’ in the Years (Live)” from Alive in America
While the beloved studio rendition originally found on Countdown to Ecstasy hides its bitter lyricism behind some of the most jovial guitar work this side of Led Zeppelin, this 1995 in-concert rearrangement featuring a truly head-spinning groove courtesy of drummer Dennis Chambers takes the song’s disparate moods and unites them into a new feeling: a bittersweet angst towards those reeled years and fast-faded everlasting summer. Hearing a saxophone trio nail the song’s glorious guitar turnaround is goosebump inducing, and the new guitar solos by Drew Zingg and Georg Wadenius certainly don’t slouch either.
KEEP THE DALLAS OBSERVER FREE... Since we started the Dallas Observer, it has been defined as the free, independent voice of Dallas, and we'd like to keep it that way. With local media under siege, it's more important than ever for us to rally support behind funding our local journalism. You can help by participating in our "I Support" program, allowing us to keep offering readers access to our incisive coverage of local news, food and culture with no paywalls.
Make a one-time donation today for as little as $1.