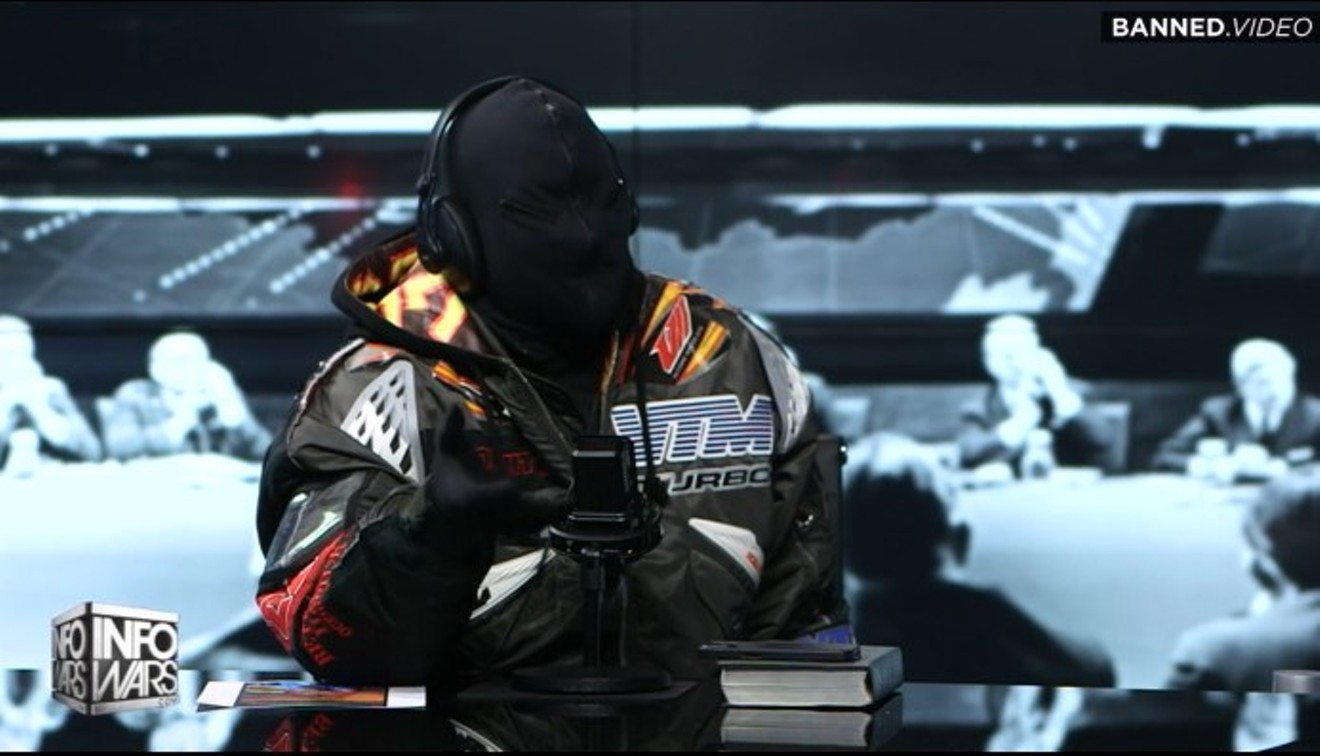 His career, reputation and whatever dollop of public support the musician/designer had left after his racist, antisemitic tirades and tantrums are now nothing but a stain of hate that will follow him to the very end.

He's been dropping hints for years and making his message clearer in recent months. But on Thursday, Ye went full Nazi on Alex Jones' Info Wars web show. Appearing in a full face covering, a motorcycle jacket and gloves, the rapper casually dropped a bomb of antisemitism straight out of 1939: "Well, I see good things about [Adolf] Hitler," "I like Hitler," "I don't like the word 'evil' next to 'Nazis'," "I love Jewish people but I also love Nazis" and "We've got to stop dissing the Nazis all the time."

Ye also said "The Holocaust is not what happened," an idea shared by famed white supremacist Nick Fuentes who was also on the show after he and Ye met privately at Mar-a-Lago with former President Donald Trump.

Ye has said things like this over and over and over again while claiming that he loves everyone — an idea behind his religion, he said, as evidenced by the Holy Bible he brought with him. Then he brought out the same tired tropes that got him kicked off social media, about how Jews run the media and how he's gonna go "death con three" [sic] on Jewish people.

Unhinged can only be used as a jumping-off point to describe Ye's rant. That's because he managed to out-crazy the king of all crazies, Alex Jones, and on his own turf. The deeper Ye went into his bigoted rabbit hole, the more Jones tried to claw his way out of it without actually looking like he's trying to just run out of the room or as far as he can get away from Ye without completely losing his breath.

For once, Jones is the person in the room trying to dissociate from crazy, and he's spouted some of the ugliest and most hateful conspiracies in history. His repeated assertions that "false flag" actors were behind school shootings will cost him at least $1 billion in court-ordered payments.

After his meeting with Ye and Fuentes, Trump tried to distance himself from Ye by calling him a "seriously troubled man," and on Thursday, right-wing social media app Parler announced it would no longer consider an offer for purchase by the rapper.

It's worth looking at how Jones reacted to Ye's two-hour regurgitation of hate. 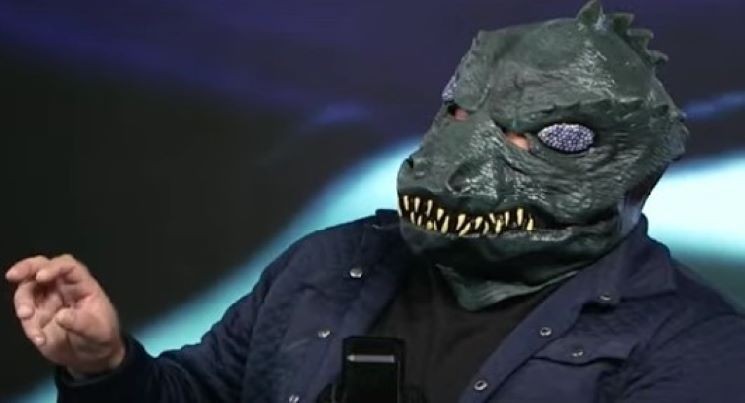 Everybody's favorite talk show host and his dynamic guests.
Screenshot from Info Wars
Up until now, Ye is just monopolizing the broadcast with a rambling stream of thoughts that dump on his ex-wife Kim Kardashian and critics of the White Lives Matter shirts he wore in Paris with Candace Owens. Then without any warning, Ye slams down hard on the gas and drives straight into hate.

"I do love Hitler," West proclaims. "I do love the Zionists. I love everyone. The Zionists cannot tell me how I can love and not love."

Jones tries to play it off as a joke, saying, "That's a good T-shirt, 'I Love Hitler.'" The host seems to immediately regret it and tries to steer the discussion to one of his correspondents. Fuentes seems unfazed by this because loving Hitler is just another day in his parents' basement where he streams his own race-baiting show. That's not an exaggeration. Fuentes broadcasts out of his parents' basement in Illinois, according to a chilling BBC documentary by filmmaker Louis Theroux called Forbidden America.

Screenshot from Info Wars
This is the point where it starts to get really uncomfortable. Jones desperately tries to get Ye off the Nazi train but Ye won't budge. You can't move crazy.

Jones knows he's lost whatever control he has of his show at this point. He makes one more desperate, clinging, syllable-stuttering attempt to give Ye an out by swinging from Nazism to fashion.

"I don't think Hitler was a good guy," Jones says. "I get the Hugo Boss uniforms, amazing. Just 'cause you're in love with the designs, you're a designer. You like the uniforms but that's about it."

"No, there's a lot of things that I looooove about Hitler," Ye says. 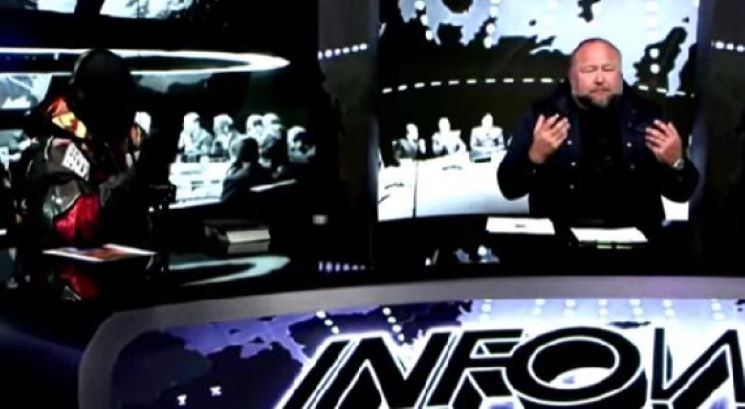 Screenshot from Info Wars
Jones is just a jabbering mess pointing in whatever direction doesn't link back to "Nazi" or "Hitler." He realizes he's sitting next to an avowed Nazi sympathizer who doesn't have even one hand on his own steering wheel. Why Jones doesn't just kick the guy off his show is anyone's guess. Either he's afraid to stand up to Ye or he thinks a noticeable portion of his viewers might align with Ye's beliefs and doesn't want them to derail his fake-supplement gravy train.

"So you just do this as a way to troll?" Jones asks.

"No, he seems like a cool guy," Ye says of Hitler.

Jones laughs and tries to piggyback off Ye's comments about how Hitler was "a good architect."

Oh! Another pivot point! Maybe that's what Jones needs to prevent this careening train from crashing into the side of a goddamn mountain.

"So you're in the love with the look of it?" Jones says.

Ye goes on for another two minutes of hate-baiting word salad until he starts singing without provocation, "Bring in the clowns/Where are the clowns?"

Turns out they were right there the whole time. Maybe if Ye had taken off his hood, he could've seen all of them.
KEEP THE DALLAS OBSERVER FREE... Since we started the Dallas Observer, it has been defined as the free, independent voice of Dallas, and we'd like to keep it that way. With local media under siege, it's more important than ever for us to rally support behind funding our local journalism. You can help by participating in our "I Support" program, allowing us to keep offering readers access to our incisive coverage of local news, food and culture with no paywalls.
Make a one-time donation today for as little as $1.