MurieL, The Oak Cliff Princess, Is Honored With a Mural in Oak Cliff 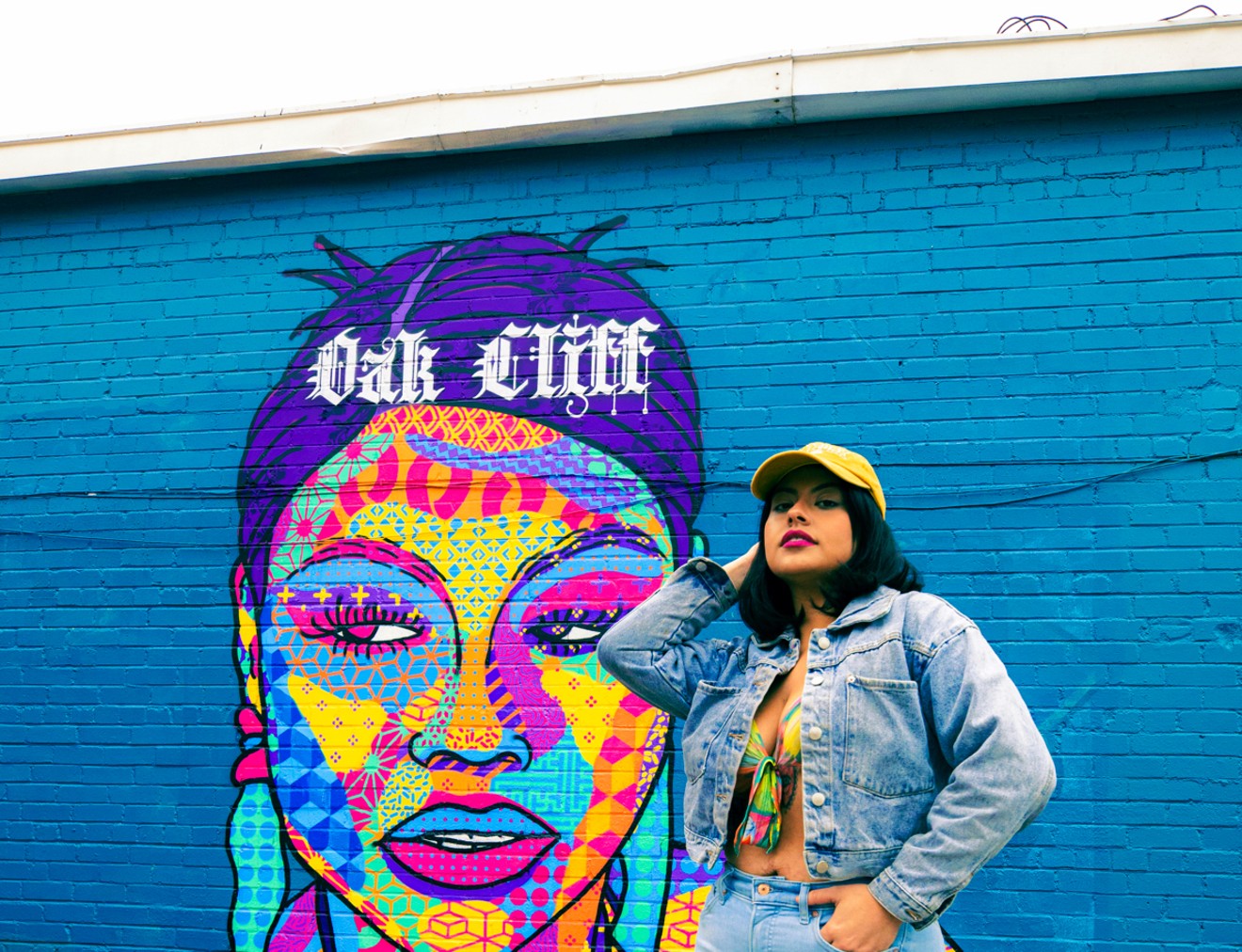 An homage by artist DYI to local legend-in-the-making MurieL. Xochitl Gonzalez
Dallas hasn't always excelled at honoring its musicians. It took years and a lot of effort to get a proper homage to Stevie Ray and Jimmie Vaughan going with a statue in their native Oak Cliff, and Deep Ellum visitors have finally been clued in to the neighborhood's heritage thanks to the Blues Alley mural project.

But we're getting better. Several local muralists have honored Erykah Badu, whose face can be found on many walls around town. You can also find a painted Leon Bridges (and the real one, if you're lucky) in the streets of Deep Ellum, as well as rising rapper Bobby Sessions.

The mural depicting "The Oak Cliff Princess" is on display on the side of the building for the art gallery Cold Soda, at 939 W. Jefferson Blvd.

“MurieL got a mural,” says the laughing 22-year-old Latin recording artist while introducing the artist and the mural to the press.

The work was a two-day creation. DIY says the design and color palette were meant to symbolize  representation and the neighborhood's limitless potential.

“A piece that represents Oak Cliff and the possibilities that come with that,” he says. “I use the style of colors and pattern so we can relate to it through commonalities and differences within ourselves. I call it deconstructed realism.”

DIY has paintings on various buildings throughout Oak Cliff. Like MurieL, he is a product of the community and uses his artwork to preserve its history and share it with the next generation.

“Oak Cliff to me means home,” he says. “It’s where I was born and raised. It’s where I raise my kids. My kids go to school out here. It means everything to me. I just wanted to catch a reflection of [what] Oak Cliff is. I felt like [MurieL] embodies that not only as a Latina woman but also born and raised out here means a lot. We’re the same but different.”

Upon seeing the mural, the singer found assurance that her music was resonating with people.
“It showed me my voice is being heard, and it is going to continue to be heard,” she says. “I’m so grateful for the artist that did this mural because it shows two artists in one piece … And one day it’s going to be seen all over the world.”

The mural’s creation is a second design following an original idea set for the Dallas Zoo’s new park, a project still in development.

“There was an original idea of using her image in a mural by the new park that is being built by the Dallas Zoo,” DIY says. “That one is still in the works and awaiting final approval. That one is to represent Oak Cliff, and [I] wanted to use an image of Latina power to represent the community that was built by strong Mexican women.” 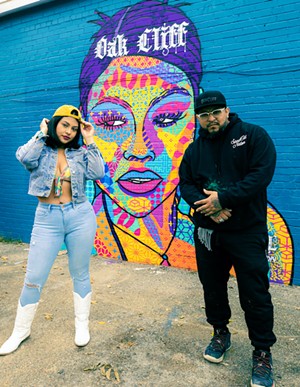 The subject and the artist come together in Oak Cliff.
Xochitl Gonzalez

Local photographer Xochitl Gonzalez was on hand to photograph the singer and the artist in front of the mural. She says MurieL’s talent and back story inspired her.

“I am super grateful to know MurieL,” Gonzalez says. “She’s crazy talented, driven and is really out there fighting for her dreams all while still being an attentive and incredible mother to her daughter. It’s always such a special thing when artists inspire other artists. She’s been a muse for my work on several occasions and it’s no surprise to me that she was the inspiration behind such a beautiful piece of art and in a part of Dallas that she proudly represents so well.”

Born Muriel Argueta, she received the moniker "The Oak Cliff Princess" from her younger brother, and it stuck around the community following heavy promotion for her music.

The R&B singer developed a fan base with Spanish and English ballads about love, femininity and finding perspective, with songs such as “Chaos,” “Running Away” and “Tell Me That You’ll Stay.” She released her debut EP, Trust The Process, in May 2021.

She was first profiled last January by the Observer’s Desiree Gutierrez, who wrote,“Within the span of a year, Muriel has magnified her presence without management or a team. Her talent opened doors that brought her to a seat at the table next to the likes of Leon Bridges.”

MurieL is currently promoting her latest single, “Your Heart Is Mine,” and recording a not-yet-titled follow-up EP, backed by a live band in Los Angeles. The entertainer first gained popularity by singing to the homeless around Oak Cliff. Her path to music began in the church, where she was taught that her voice was a gift that brings people together.

“The reason I do music is because ever since I was young it was always planted in me to sing,” she says. “God gave me this gift that I will share with the world, and if I’m not here tomorrow, I at least want to say I shared my gift with the world and it brought people together.”
KEEP THE DALLAS OBSERVER FREE... Since we started the Dallas Observer, it has been defined as the free, independent voice of Dallas, and we'd like to keep it that way. With local media under siege, it's more important than ever for us to rally support behind funding our local journalism. You can help by participating in our "I Support" program, allowing us to keep offering readers access to our incisive coverage of local news, food and culture with no paywalls.
Make a one-time donation today for as little as $1.