Everyone Can Calm Down Now, the Vaughan Brothers Statue Is Fine 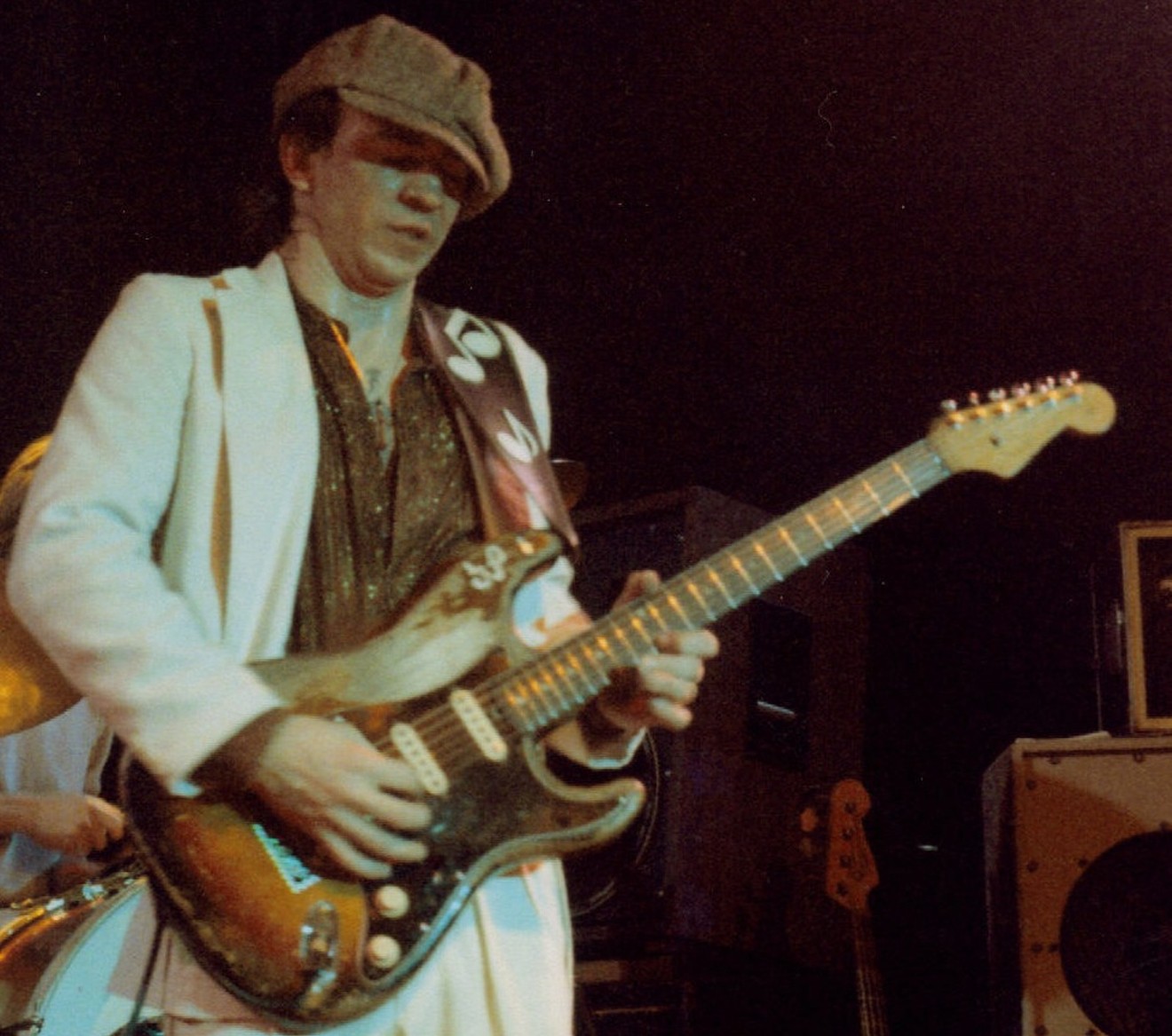 The late Stevie Ray Vaughan playing in Austin in 1983. Bob Bissett
Let us backtrack a few years so that you, along with everyone else who has followed the saga of the Vaughan Brothers statue, can properly panic and then calm down.

It all started when locals came to realize that despite the fact that guitar legends Stevie Ray and Jimmie Vaughan were born and shred in Dallas (where the late Stevie Ray is also buried), the city had never properly acknowledged this honor. While Austin — where Stevie Ray spent his later years — proudly claims him with a statue, Dallas has been really slow in honoring the musician's legacy.

That’s until Kirby Warnock set out to right that wrong. Through efforts that included a blues show at the Kessler, auctioning off donated items like signed guitars donated by Eric Clapton and Steve Miller, Warnock was able to fundraise the $48,000 required to petition the city of Dallas for the rest.

The city offered up funding for the project: A statue commemorating both brothers, to be built in Kiest Park, two blocks away from their childhood home.

Spanish artist Casto Solano was chosen to design the statue. After years of negotiating with Dallas City Council, fundraising and planning, the statue was set to finally debut this March. Then a bug started going around.


"Is it gonna look exactly like the artist rendition? I can say no, but I still think it’s gonna look great." – Kirby Warnock

The statue was dropped off at Kiest Park, and the unveiling was postponed.

“The city of Dallas spent $148,000 to commission a sculpture honoring the Vaughan Brothers," said a post by a Dallas woman named Mary Lou Sullivan. "But when the March 20 unveiling was postponed by the virus, they left it out in Kiest Park even though the steel wasn’t treated. How stupid can you be?”

The post, which was published on Facebook this past Thursday, was inaccurate to begin with. The city was responsible for $89,831, while the rest was raised independently. Yet it was still shared by hundreds, posted on preservation pages and by other Dallas history groups.

When the unveiling was postponed, the monument was covered up in Tyvek home wrap, which was reportedly removed by a vandal, as Kay Kallos, the city’s public art program manager, told the Oak Cliff Advocate.

Kallos says that the sculpture hasn't suffered any damage.

“It is made of weathering steel and is aging as planned,” she told the publication. “No treatment is required for this material.”

Warnock, former editor of Buddy magazine and the director of When Dallas Rocked, who spearheaded the fundraising effort, says that he’s well aware of the post, as many people sent it to his wife, since he's not on Facebook.

He tells the Observer that he's not worried about the state of the monument, and that the information was inaccurate.

"It’s gonna be a great looking piece of artwork," he says. "Is it gonna look exactly like the artist rendition? I can say no, but I still think it’s gonna look great, because I’ve seen what it’s finally gonna look like via the weathered steel."

Warnock says this is now a city project, while he’s just an interested citizen. (“I’m not the one writing that check") but he remains committed to the statue and says that once it's unveiled, Vaughan fans will be happy with the commemorative art.

"I think everyone is gonna be pleased with it, I think it’s gonna stand the test of time," Warnock says. "It’s been a hell of a struggle to get this far."

Meanwhile, Austin has outdone Dallas yet again, by putting a mask over the Stevie Ray statue's face. 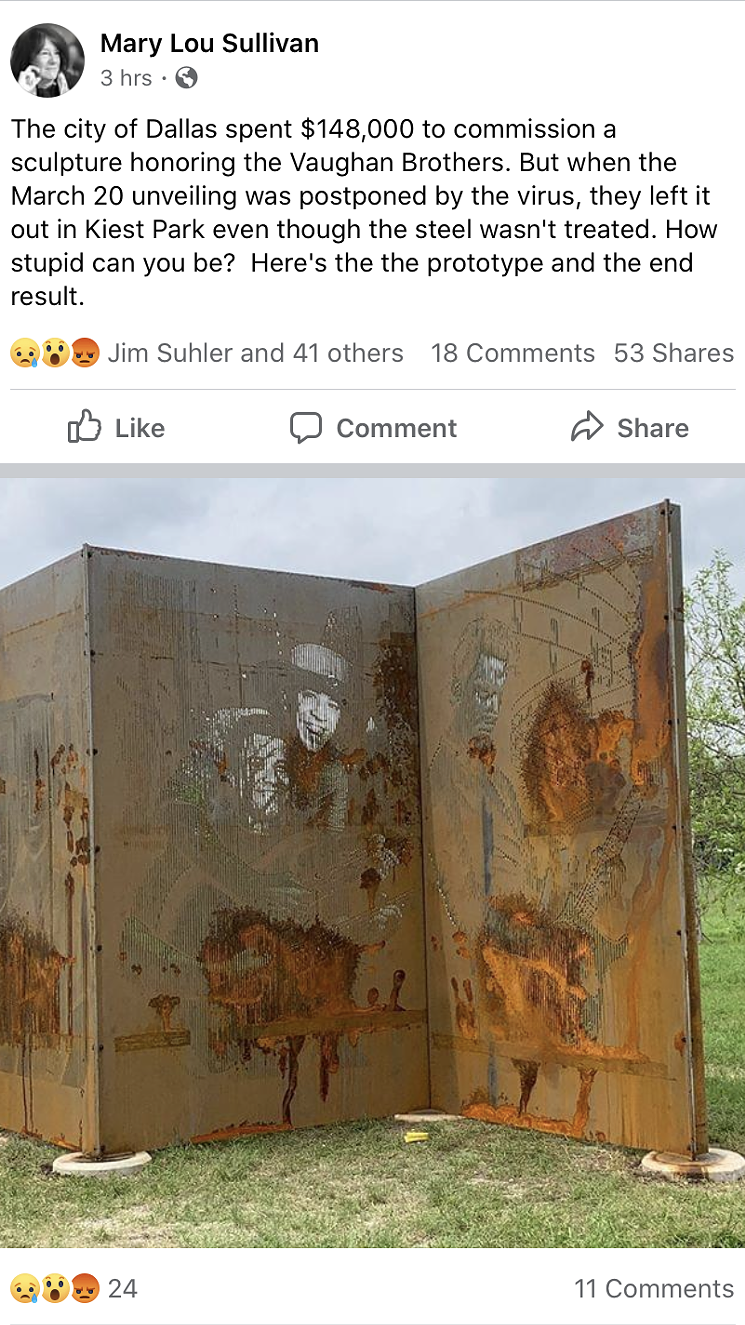 The post that began circulating on Thursday alarmed Vaughan fans who had advocated for years for a Vaughan memorial.
Facebook screenshot
KEEP THE DALLAS OBSERVER FREE... Since we started the Dallas Observer, it has been defined as the free, independent voice of Dallas, and we'd like to keep it that way. With local media under siege, it's more important than ever for us to rally support behind funding our local journalism. You can help by participating in our "I Support" program, allowing us to keep offering readers access to our incisive coverage of local news, food and culture with no paywalls.
Make a one-time donation today for as little as $1.