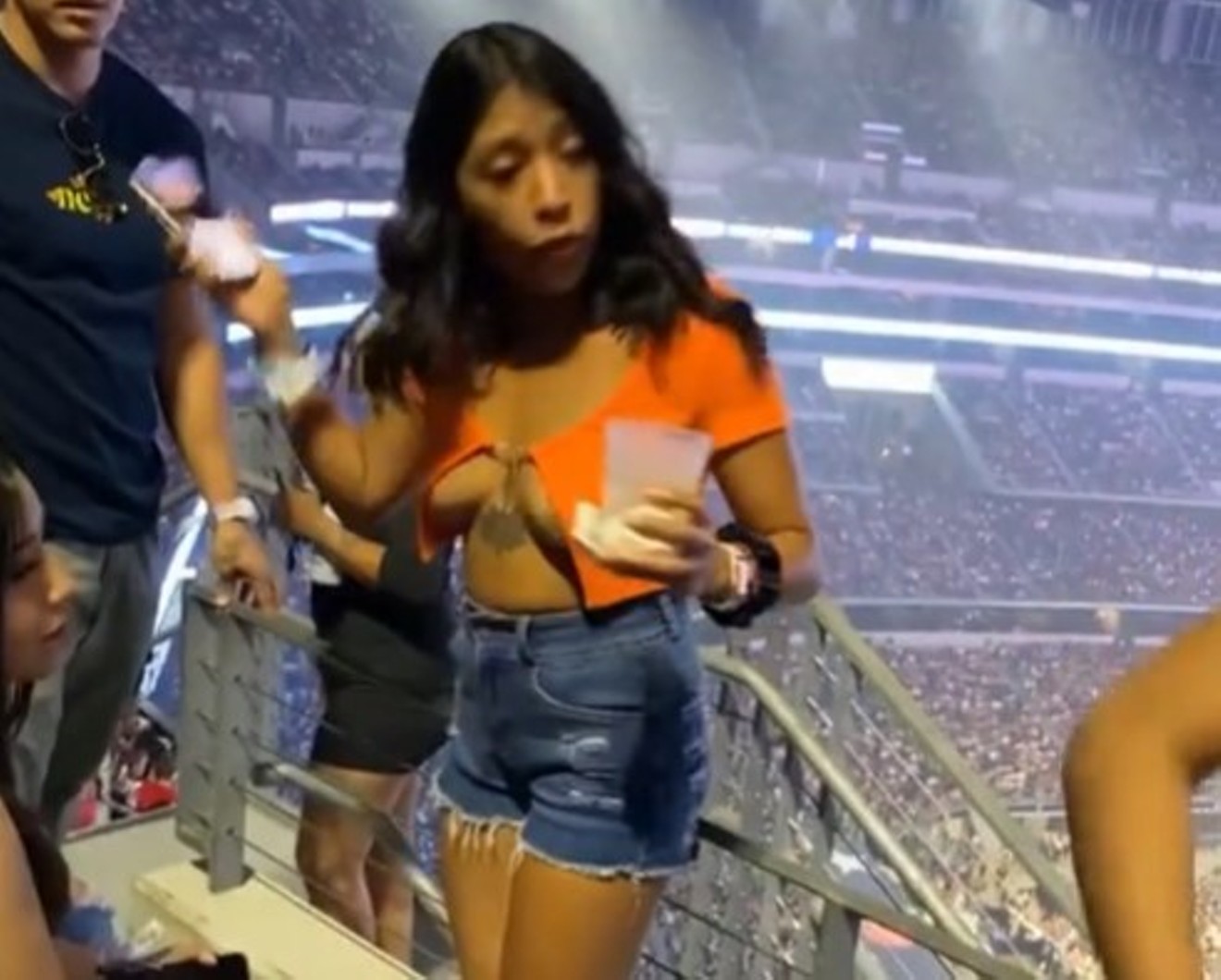 An unidentified woman gets a group of friends to leave her assigned seats before the Bad Bunny show at AT&T Stadium. Screenshot from Tiktok
Going to a show these days is a very expensive and involved process, especially at a place like Arlington's AT&T Stadium. You know, that stadium we gave to Jerry Jones for free without any revenue, stakes or even a lousy loan in return.

Thanks to this giant cash machine, just parking a car can cost up to $125. Then there are concessions and drinks if you weren't smart enough to eat before you left or sneak something in so you wouldn't have to pay three times the price for something simple like a bottle of water or a hot dog.

Then there's the cost of tickets. There are so many fees and hidden charges that getting a decent seat at a live performance like the Bad Bunny show last Sunday is nearly impossible on a regular salary. The average price of concert tickets can run you over $900, according to Ticketmaster.

So when you find someone sitting in the seats that cost you an organ and your monthly rent, it's understandably upsetting.

The best thing you can do in that situation is quell your urge to kill, but don't quell all of it. Take an ounce of that natural rage and use it to tell the people they're in your seats — just like one woman did at the Bad Bunny show in Arlington in a moment captured in a viral TikTok video.

The unidentified woman finds a group of friends in her seat up in the nosebleed section at the Bad Bunny show. She starts by counting the numbers on the seats, presumably to show the people where they need to be sitting instead.

When they don't move, she walks over to them and verbally jabs them to go "stand your ground" to their appropriate seats or somewhere else.

She doesn't make a fist or start swinging at anyone. She just tells them what's what, and they get up and move without a fuss. The TikTok is now making the rounds, as commenters praise the woman for handling the mixup with a level-headed assertiveness rarely seen at a sports stadium.

Turns out he wasn't the only person that night who would inspire Bad Bunny fans. So when you walk up a mountain of debt just to see your favorite performer live, only to find someone else's butt in your seat, don't go off on them. If possible, tell them their seats are in Jerry Jones' skybox. Make him deal with the fans for once.
KEEP THE DALLAS OBSERVER FREE... Since we started the Dallas Observer, it has been defined as the free, independent voice of Dallas, and we'd like to keep it that way. With local media under siege, it's more important than ever for us to rally support behind funding our local journalism. You can help by participating in our "I Support" program, allowing us to keep offering readers access to our incisive coverage of local news, food and culture with no paywalls.
Make a one-time donation today for as little as $1.