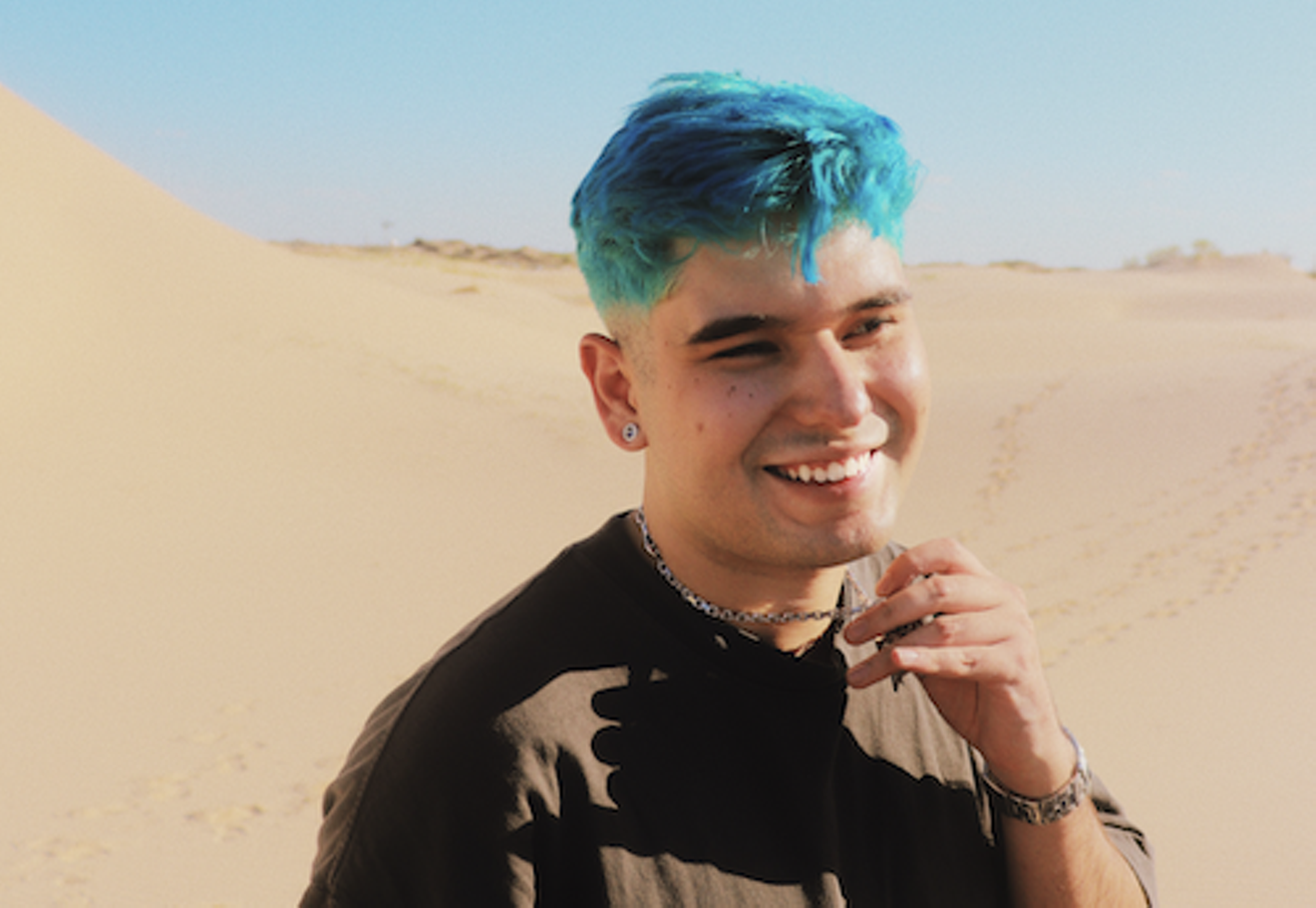 Aaron Paredes, aka "A-Wall," stops at Ruins in Deep Ellum on Oct. 31 in support of his latest album, Autopilot. Devin Desouza
On an ordinary day a year ago, 23-year-old Aaron Paredes woke up at his parents' house in Arlington. He checked his phone, just as he always did, and to both his surprise and that of his close friends, he was TikTok famous. He scrolled through text after text of friends commenting on which celebrities were using his single “Loverboy” as a soundtrack to their own videos in response to the trending tag, Who Got You Smiling Like That? Taylor Swift, The Jonas Brothers and Sylvester Stallone were now associated with "Loverboy," and Aaron Paredes became A-Wall.

Originally from El Paso, the artist relocated to Arlington with his family when he was 8. Early on he had a knack for being the class clown and a DJ. After graduating from high school, Paredes studied at The University of Texas at Arlington and struggled to find a major he was passionate about. He enrolled at The Art Institute of Dallas and started writing music for what would become his first album. Paredes’ only aspiration for his first LP, Verano, was to perform the album at house parties, including one in his parents' backyard for the album's release.

“My mindset was to make a full album and be done with music. So I had a small release party, and thought I was done. For some reason, the record playlisted on Spotify on a fresh finds list,” Paredes says.

After several months of climbing and a few more playlists geared toward showcasing young Latino artists, the single “Loverboy” hit its peak, clocking millions of streams on Spotify and affording A-Wall his first major career moment.

“Someone did an edit of the song, and it became a trend of people making videos of themselves and using the song on whatever made them happy that day. I would wake up to my phone blowing up that Taylor Swift used my song in a video. It was insane,” Paredes says.

At the time the single blew up, the artist had just left a job in the hospitality industry. The time away from working gave Paredes the chance to accept offers, including tours opening for Boy Pablo and Kid Cudi.

“It happened at a weird time, at the end of COVID. I was working at a hotel bar during it all, and ‘Lover Boy’ blew up. I started getting calls left and right, crazy opportunities. I even did an ad with Pepsi for a TikTok campaign,” Paredes says.

On Oct. 14, one year after a frenzy of talks with major record labels, 174 million streams of “Loverboy” and a few embers of self doubt, A-Wall’s new 12-track album Autopilot was released on all streaming platforms. Although recording the album was both a rewarding and exciting experience, he says, it was not always easy.

“A lot of the things I talk about on the album are anxieties I feel. Even now, saying that I’m going to do music, there’s a lot of risk in that, and I feel people don’t talk about that as much.”

Compared with his early work, Autopilot is a study in contrasts. For the music part, Paredes enlisted friend and guitarist Zebra Troop to take the tracks to new levels sonically. Lyrically, the album keeps a mature tone. Themes covered in the tracks range from substance abuse to personal anxieties, to global problems through the eyes of a new generation. Most major record labels, however, are just looking for the next Pepsi commercial.

“What everybody wanted from me was another five songs like ‘Loverboy.’ It wasn’t looking like anyone was taking me seriously, so I was torn on what I should be doing. It delayed the album, and this new pressure made me start doubting myself,” Paredes says.

In the end, Revolution Records picked up Autopilot for distribution and let Paredes retain his mature lyrics, clever rhetoric and artistic integrity. While commercial success and celebrity culture have their own appeal, Paredes cares about the craft of creating music, and that keeps his work ethic fueled.

“I’m revamping everything. I really like when artists do that, when you don’t know what exactly they’re going to put out next,” Paredes says.

Supporting the release of Autopilot, the artist is scheduled for a tour that stops in Dallas on Oct. 31 at Ruins in Deep Ellum before heading to Los Angeles in November. Although Paredes knows nothing in music is ever a sure bet, he has racked up a few big scores and wants to continue to keep doing so on his own terms.

“It’s a scary industry, but what I want from it is to work my ass off until I’m at the level that my name can sit comfortably with those artists that inspired me to be here. I also want to bring all my musician friends along the way, especially the ones that don’t always have opportunities to be creative,” Paredes says.
KEEP THE DALLAS OBSERVER FREE... Since we started the Dallas Observer, it has been defined as the free, independent voice of Dallas, and we'd like to keep it that way. With local media under siege, it's more important than ever for us to rally support behind funding our local journalism. You can help by participating in our "I Support" program, allowing us to keep offering readers access to our incisive coverage of local news, food and culture with no paywalls.
Make a one-time donation today for as little as $1.