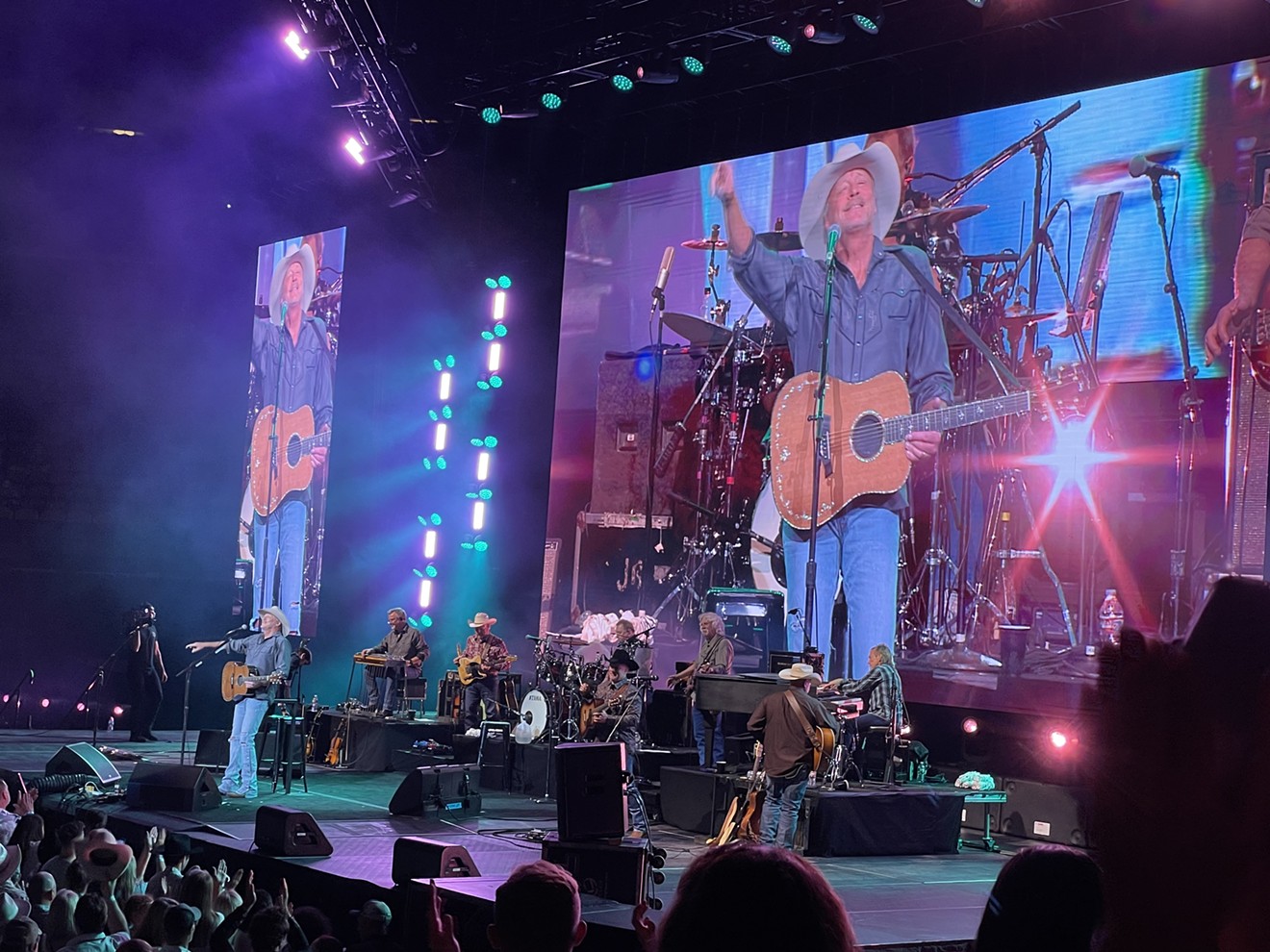 It was an emotional farewell to a master songwriter at Alan Jackson's Dallas show on Saturday. Preston Jones
Time and again, Alan Jackson has demonstrated a gift for the backward glance.

The pull of memory, the golden glow of better days, the first blush of love — the singer-songwriter has shown his ability to evoke nostalgia without succumbing to sentimentality as far back as “I’d Love You All Over Again,” a hit single from his 1990 debut, Here in the Real World.

So, whether explicitly or implicitly, an argument could be made Jackson has been preparing for this moment — an extended, poignant farewell — from the moment he broke through.

Saturday night brought Jackson to Dallas and an adoring, near-capacity crowd at American Airlines Center for one of the final stops on his Last Call: One More for the Road tour. (Jackson’s last scheduled date is Oct. 8 in Pittsburgh.) Saturday’s gig was his first North Texas appearance in a little over two years, following a 2020 stop at Fort Worth’s Dickies Arena.

The 63-year-old Country Music Hall of Famer announced this 30-city run of dates would be his final time touring at this scale, owing to the advancing severity of his chronic, degenerative Charcot-Marie-Tooth (CMT) neuropathy condition which impairs his muscle function, balance and movement. However, if anyone walked into the arena Saturday night unaware of the state of Jackson’s health and watched the 90-minute set unfold, they would’ve been hard pressed to tell anything was off.

Although he made the surprising confession midway through that his whiskey-smooth baritone voice was struggling. “I’m not singing a 100%,” Jackson said, after violently clearing his throat. “I’m dealing with some stuff; but I’m going to give you all I got.”

Jackson looked and sounded as sharp as ever over the course of his roughly 22-song performance. The only concession to his CMT impairment was a small brace bolted into the stage, which Jackson spent much of the night leaning against for support.

So voluminous is his chart-topping output that, despite plenty of fan favorites making an appearance, he still easily skipped another dozen tracks that would’ve been welcome. In between abbreviated versions of “Gone Country,” “Here in the Real World,” “Chasin’ That Neon Rainbow” and — yes, of course — “Dallas,” Jackson left plenty of time to reflect on his life and career: “I lived the American dream,” he said early on. “I’ve had more hits than I could remember, sold more records than I could imagine. Thank you for your support all these years.”

“I’m not singing a 100%,” Jackson said, after violently clearing his throat. “I’m dealing with some stuff; but I’m going to give you all I got.”

The audience, full of families and fans of all ages, many clad in attire not unlike the crisp hat and artfully torn jeans Jackson himself wore, took every opportunity to share its affection, through handmade signs and doffed cowboy hats and cries of “We love you!” flung through the dark.

Although there were many lump-in-throat moments Saturday — “Drive (For Daddy Gene)” remains Jackson’s most potent emotional sledgehammer — perhaps the most affecting was the extended ovation Jackson received after finishing the 2003 single “Remember When,” a gesture from those gathered that seemed to catch Jackson off guard, his eyes visibly moistening.

Although it’s nearly 20 years old, that song in particular served to underscore the sense that Jackson — a Southern-bred traditionalist who arrived in Nashville as the genre was beginning its ascent to '90s arena rock-tinged dominance — is and has always been an old soul.

He’s someone who understands, as he put it Saturday, “songs about life and love and heartbreak and drinking and dying” are the bedrock of “real country music,” but such songs are more often evoked than actually created. (That aside was another reminder the battle over what constitutes “real country music” is one that’s been waged for decades, and probably won’t be won anytime soon — if ever.)

His catalog, laden with awards and beloved by millions, was somewhat dressed up in ‘90s country drag in the early going — Jackson liberally sprinkled his set with clips from his goofy music videos; his feathered hair and aviators and denim overalls on full, unironic display — but time has peeled away the gimmicks to reveal the thoughtful artist underneath. Age and circumstance, too, have played a role, illuminating his vulnerability in a way which only reinforces what a masterful songwriter Alan Jackson was and is.

In that sense, then, Saturday’s performance, an undeniable end of an era — it was hard not to fight back tears watching Jackson lean slightly on a stagehand as he steadily ambled off stage, the roar of the crowd at his back — but also a chance to pay proper tribute and give thanks for an artist who, more or less in plain sight, helped redefine country music. There won’t be another like him — no small town Southern men of his caliber are looming large on the horizon — so we can only look back, and be glad to have had Alan Jackson at all.
KEEP THE DALLAS OBSERVER FREE... Since we started the Dallas Observer, it has been defined as the free, independent voice of Dallas, and we'd like to keep it that way. With local media under siege, it's more important than ever for us to rally support behind funding our local journalism. You can help by participating in our "I Support" program, allowing us to keep offering readers access to our incisive coverage of local news, food and culture with no paywalls.
Make a one-time donation today for as little as $1.