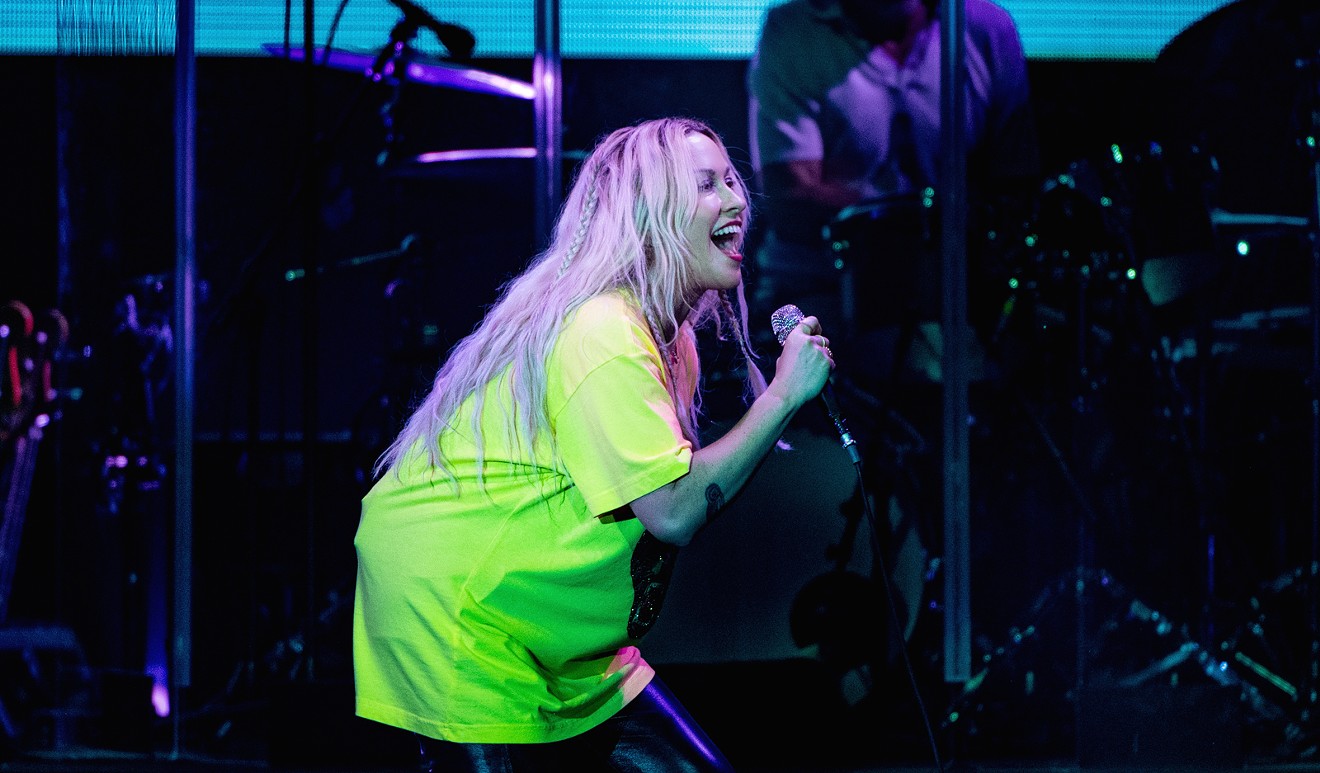 Alanis Morrissette and Garbage took us back to our complicated '90s youths on Friday. Mike Brooks
The internet loves to divide us, sometimes in ways that have nothing to do with politics. The last few years have cemented a culture of oddly tribalistic, generational pride (especially among GenZers), through memes and endless, mindless articles and quizzes telling readers that kids today will never know the struggle of this and you’re not a ‘90s kid if you don’t remember that.

If ever a marketing company wanted to brain-pick a focus group from a demographic specifically composed of the last generation that watched MTV for its music videos (YouTube-era kids will really never know the struggle) they needed to look no further than the crowd of thousands who gathered at the venue for a mini, female-fronted, alt-rock festival to see Cat Power, Garbage and Alanis Morissette. 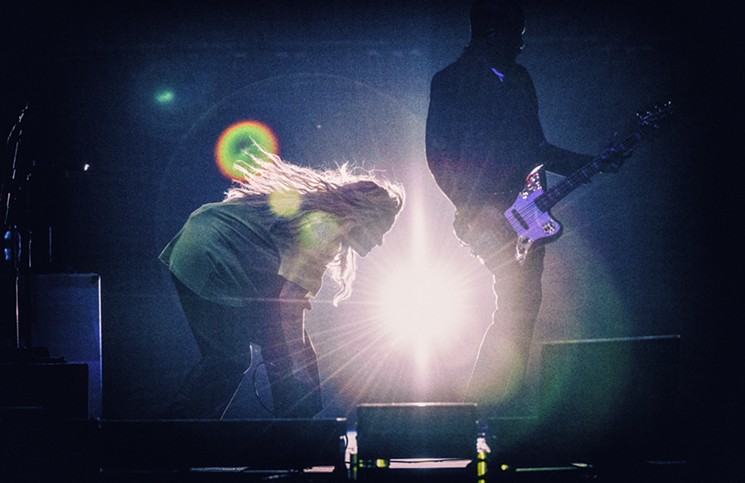 The age group, as if we need to specify, would almost be in the 30-40  range with only a few outliers.

One man among the audience stood out for different reasons, walking around the front in a T-shirt that read “Fuck Kamala Harris," prompting a lone man sitting in an Alanis tee to complain to others seated around him: “What the fuck? Why is he even here?”

That small scene was a helpful reminder of the current calendar year. You’d have sworn otherwise it was 1996, save for the looming threat of the Delta variant, which kept the audience at a (mostly) respectful distance.
click to enlarge 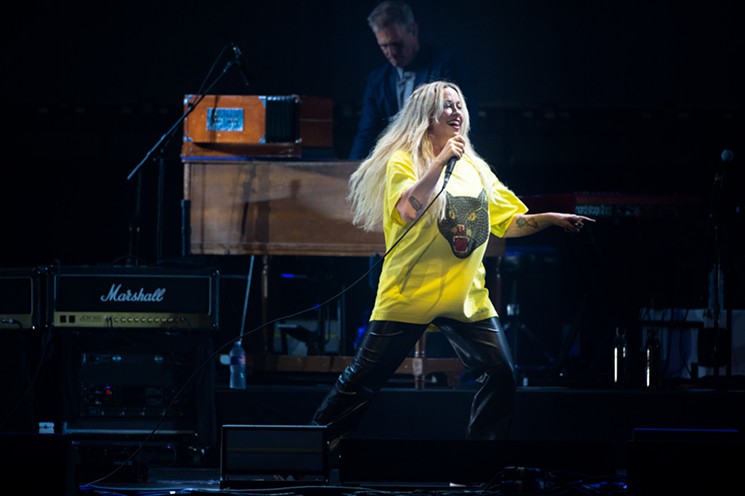 In a sparkling black and yellow dress over yellow and black leopard tights, Manson was again the focal point on stage, starting off with lesser known singles before pacifying an audience hungry for old favorites such as “Stupid Girl” and “#1 Crush.”

Her hair was back from a longtime pink to its signature red. If Manson or her vocal chords have aged a day, no one but her doctor would know it. She was still the ultimate cool girl, the quietly rebellious, feminist icon who was entirely responsible for many a (bi)sexual awakening in the ‘90s.

Manson commanded the stage naturally and seemed never to run out of moves. She worked up the crowd by dropping to her knees at times, lying on the stage, even blowing kisses back and forth with audience members, but she remained quite literally cool, like she’s never broken a sweat a day in her life.

A string of the band's cult-classic ‘90s hits followed with “Push,” “I Think I’m Paranoid,” “Special” and “When I Grow Up,” along with a cover of Depeche Mode’s “Personal Jesus.”

Manson thanked the crowd profusely for coming early to see Garbage and Cat Power “after a hell-fest of a year.”

The band closed its set with a stripped down “I’m Only Happy When it Rains” and exited cooly, with no encore.

The uniting thread among the artists in the lineup is obvious now. But at the time, Garbage was a band favored by the kids who smoked behind the school building, whose favorite movie was probably Trainspotting and who subscribed to music magazines to find new bands. They weren’t an obscure find by any means, but despite their success, weren’t particularly mainstream, either.

Morissette fandom, on the other hand, was democratizing; her popularity across the board made her a commercially successful phenom.

Manson and Morissette remain two of the biggest female rock stars of all time, and both were enormously influential. In addition to breaking sales records with the ubiquitous Jagged Little Pill, Morrissette paved the way for a slew of young (white), angsty female singer-songwriters.

Her success crossed over in other ways. Morissette was a rock star onstage who held pop star appeal for endless radio play, with a critically acclaimed record in a time that was rampant with albums consisting of one-hit wonders stuffed with filler for the sake of CD sales.

By the time she entered the stage around 9:20 p.m., thousands more Morissette fans had shown up and were piling onto the venue’s lawn like it was Woodstock to celebrate the occasion of her tour, the 25th anniversary of Jagged Little Pill.

Morissette’s entry to the stage was preceded by a retrospective video that cleverly reminded audiences of her indisputable significance in music history.

With clips from her early acting days to Saturday Night Live skits and James Corden parodies and her acting roles on Kevin Smith’s Dogma (where she played God) to Curb Your Enthusiasm, the montage was effective: Morissette is more than a colossally successful artist. She's a crucial part of pop culture.

Fittingly, she opened with “All I Really Want,” the first track off Jagged, cheerily bouncing around the stage in a Billie Eilish-loose ensemble, a bulky yellow T-shirt with a sparkly panther and loose leather pants.

Her long hair was an off-brand blond, but you’d have to be fresh off another planet to not recognize her famous face’s distinct doe eyes and Steven Tyler sized mouth. Her voice, especially, is unmistakable. Morissette has never ventured far off from her sound, even in her recent duet with Willie Nelson “On the Road Again,” which she sang solo on Friday.

The show was backdropped by video that included footage of Black Lives Matter protests and later of churches during the confessional "Mary Jane."

Morissette's quasi-yodel high notes (along with Dolores O’Riordan’s) have spurred a thousand imitators and her phrasing can only be described as a personal accent: her growly “R” sounds marking those familiar lyrics, as she undulated through high and low notes for emphasis. The Morissette quality was on full display as she opened, unlike Garbage, with her early hits like “Hand in My Pocket.”

Every ballad turned into a mass singalong, a choir for the high priestess of angsty youth, as thousands of voices echoed the soundtrack to their first first breakups and breakdowns, which were made that much more deliciously intense when mirrored by Morissette’s lyrics about enraged love, bitterly sarcastic resentments and complicated emotion.

Strangers among the audience looked to each other as they mouthed the words. The crowd’s energy could’ve sustained Texas though its worst power outages.

That’s perhaps why her last song of the night was “Thank U” from Jagged's follow-up Supposed Former Infatuation Junkie, a hit song from a hit album that despite its sales didn’t linger in the collective consciousness like any song off her third album.

The screen lit up with tweets about thankfulness, crafting a sincere hand-written thank you note to the fans who stayed with her after Jagged Little Pill — unlike the ones who walked out early to beat traffic.

They were there for the best part, however. Nothing beats hearing a crowd of thousands singing the words, “And are you thinking of me when you FUCK her?” Nineties kids will remember it.
click to enlarge 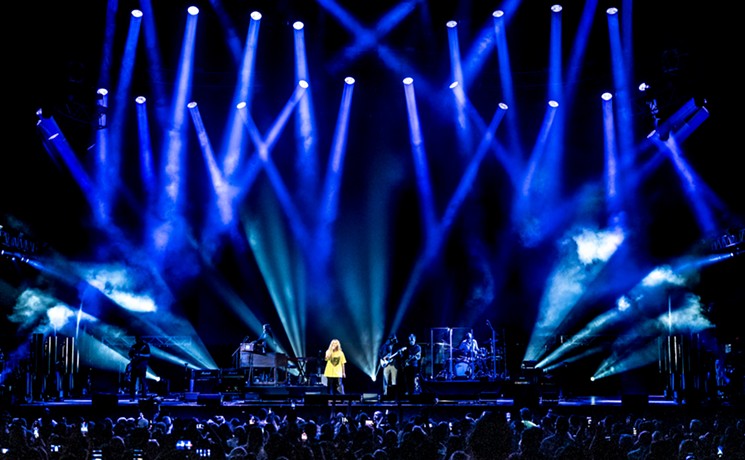 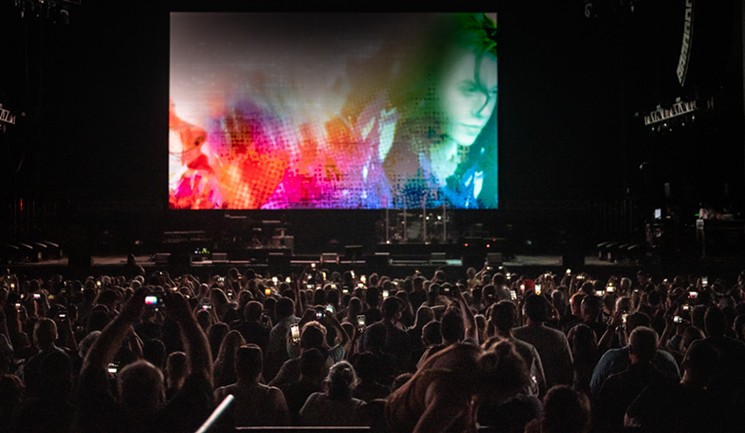 Mike Brooks
KEEP THE DALLAS OBSERVER FREE... Since we started the Dallas Observer, it has been defined as the free, independent voice of Dallas, and we'd like to keep it that way. With local media under siege, it's more important than ever for us to rally support behind funding our local journalism. You can help by participating in our "I Support" program, allowing us to keep offering readers access to our incisive coverage of local news, food and culture with no paywalls.
Make a one-time donation today for as little as $1.