Steve Earle: 'Being an Outlaw ... Was About Artistic Freedom' 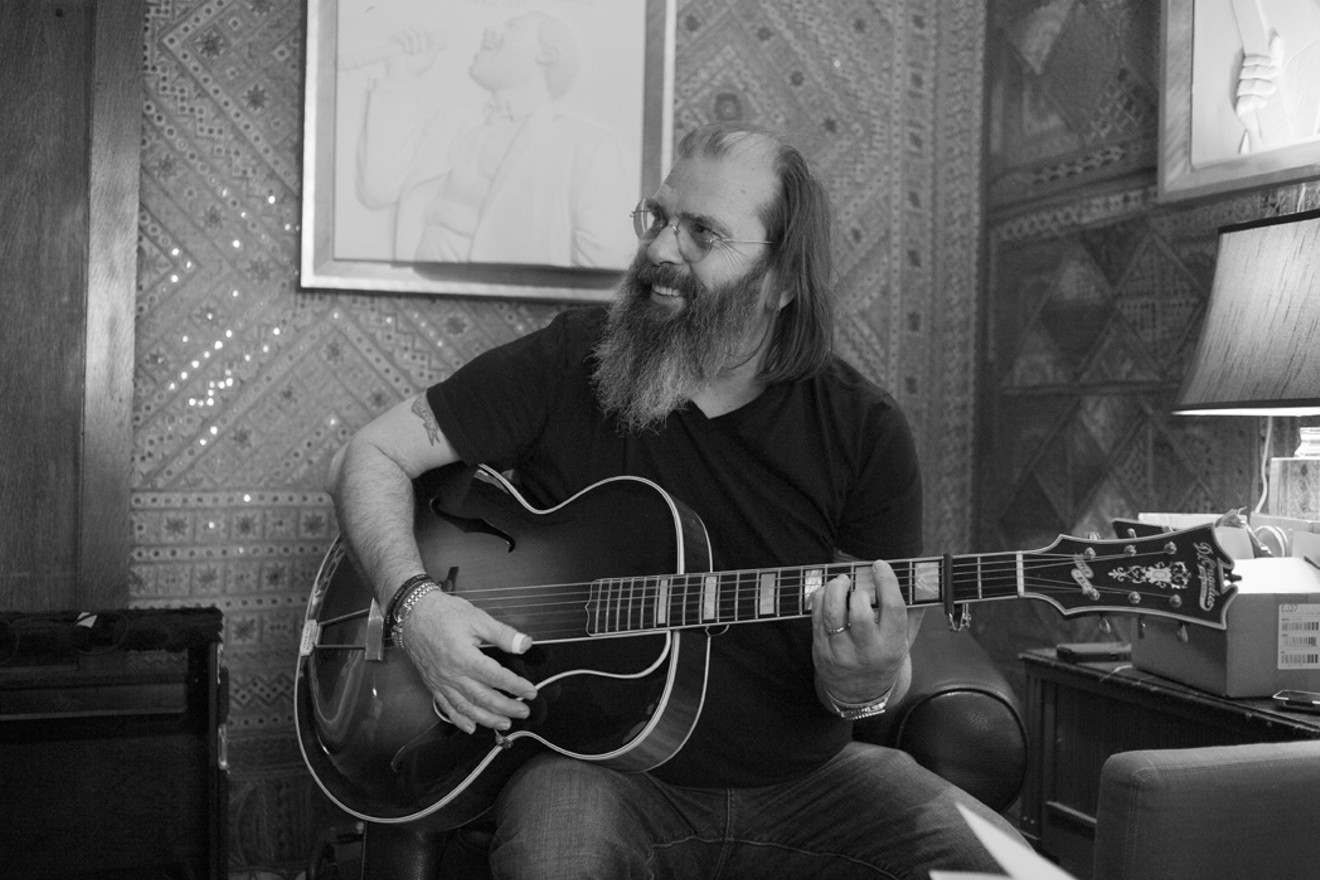 So You Wanna Be an Outlaw marks the first time that Steve Earle, 62, has been on the back pickup of a Fender Telecaster for two thirds of an album. Ted Barron

Steve Earle plays in Dallas on Monday, June 19, at Good Records and Thursday, July 6, at House of Blues


Steve Earle tips his hat to his Texas roots and to Waylon Jennings on his new album So You Wanna Be an Outlaw, which hits stores this Friday, June 16.

“There are things that rock pretty hard,” he says. “But overall, I think it’s a country record.”

It’s the first time Earle, 62, has been on the back pickup of a Fender Telecaster for two thirds of an album. It’s also the best band he’s ever had, he says. And they’re all damn proud of it. The tour kicks off July 1 in Texas. And for Earle, who grew up in San Antonio, it’s the logical place to start.

“I was at the Dripping Springs Reunion,” he says. “I was at the first Fourth of July picnic. That’s one reason making this record was important to me. They used that term outlaw to refer to us. Being an outlaw was about, then, as far as the music goes, it was about artistic freedom.”

Earle will perform June 19 at Good Records and sign copies of So You Wanna Be an Outlaw. He’ll play again in Dallas on July 6 at the House of Blues.

“We’ll be coming straight off the picnic,” he says. “That’s the last show in Texas before we head east. We’ll go into next year with this one.”

Earle, who lives in New York, describes himself as an insecure autodidact with an eighth-grade education who's constantly trying to compensate for it. He reads everything he can get his hands on, is working on a musical and is writing his third book, a memoir.

"At this point in my life, in our history, in this country, walking out my front door ... and seeing a mixed-race, same-sex couple holding hands makes me feel safe." – Steve Earle

“It’s largely about recovery, to tell you the truth,” says Earle, who has been sober for two decades.

He’s also churned out another recording — his first in Austin.

“I hoped Willie would sing [the album’s title track] with me when I wrote it,” he says. “We recorded it in Austin in December. The day before he came back to Austin to play New Year’s Eve, he met me in the studio in Maui and he put his vocals on.”

Miranda Lambert’s vocals can also be heard on "This is How it Ends," which she and Earle co-wrote. Johnny Bush, who penned "Whiskey River," appears on the album, too. And Earle says he co-wrote "News from Colorado" with his ex-wife Allison Moorer and niece Emily Earle. In true Earle form, the release has its prison songs.

“I used to correspond with a lot of people on death row,” Earle says. “They’ve all been executed. I’ve done a lot of work against the death penalty. And that started with 'Billy Austin.'”

Earle explains that his parents had lived in South Texas, near Huntsville, and every time there was an execution, his mother would become upset. The lyrics to 1991's "Billy Austin," about a 29-year-old death row inmate, were inspired by phone conversations with her. Earle later spent some time locked up himself. When he got out, he was asked to write a song for the '96 death row crime drama Dead Man Walking.

“Things lead you where they lead you,” he says.

And they seem to have led Earle full circle back to Texas, where he says he had a blast recording his latest album in Austin.

“My two grandkids are there,” he says. “I’ve got one more on the way in Portland, Oregon, because Justin’s got a little girl on the way in July.”

Earle will forever be a Texan, he says. But he’s comfortable in Greenwich Village.

“At this point in my life, in our history, in this country, walking out my front door when I get through with these interviews and seeing a mixed-race, same-sex couple holding hands makes me feel safe,” Earle says. “As white, and as heterosexual as I am, in this point in our history, I’m just more comfortable here.”