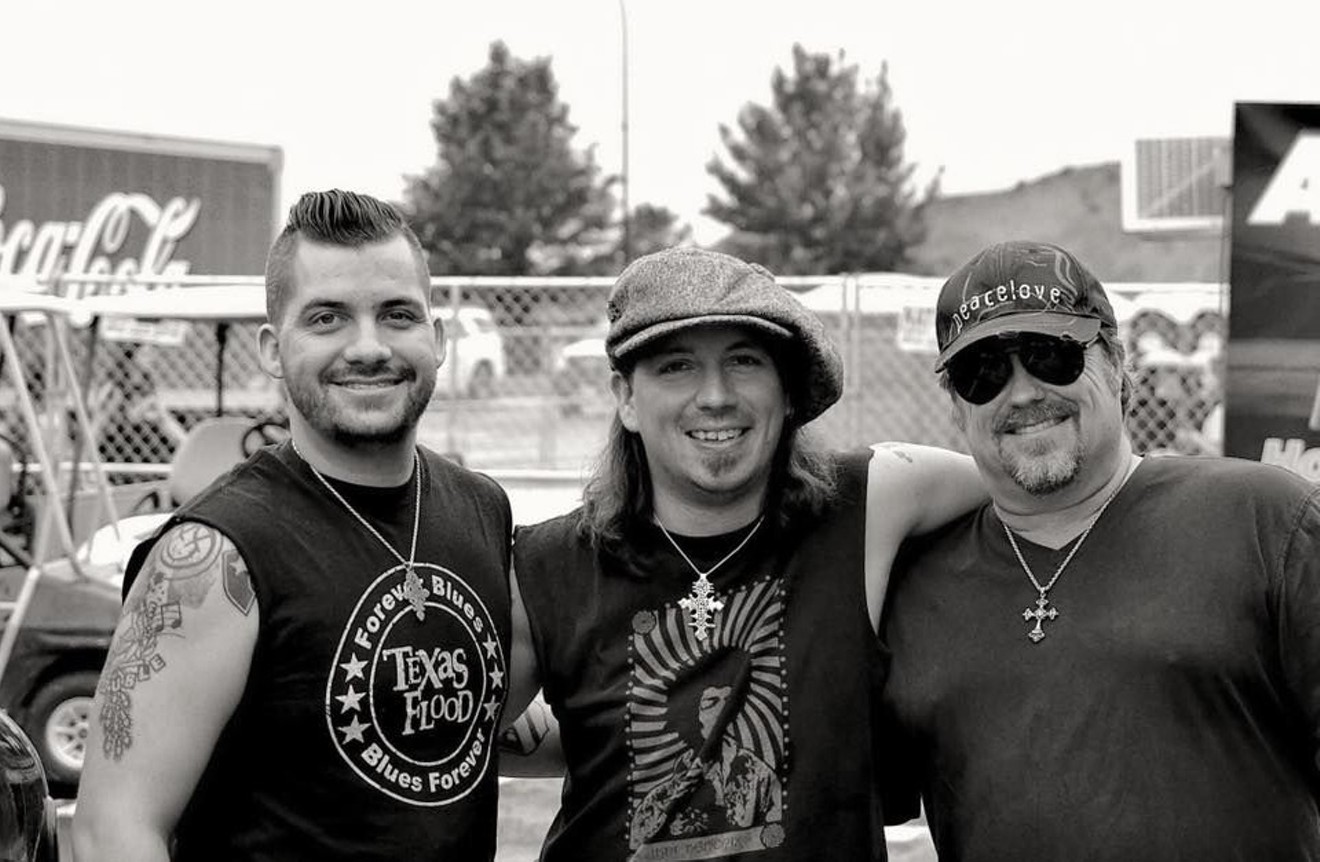 Texas Flood came together after singer Tommy Katona (middle) moved from Hungary to Dallas to connect with Stevie Ray Vaughan's culture. Leo Barnes
As a young bluesman, Tommy Katona journeyed to Dallas to learn more about the genre. Last year, things got a whole lot bluer.

Katona, now 36, hails from Hungary and styled himself after the late Stevie Ray Vaughan. He’d connected with Vaughan’s music at the tender age of 5, he says, later traveling to Dallas for the annual Stevie Ray Vaughan ride and concert and to immerse himself in local culture.

“I came to Dallas in 2006 for the first time because Stevie was from here,” he says. “I really wanted to see where he was from, meet some people who knew him or who he played with.”

Before long, Katona crossed paths with Steve Buckner. The two are now part of a trio that form the band Texas Flood with Katona handling both guitar and vocals while Buckner, 55, plays bass guitar and Travis Montoya, 33, thrashes the drums.

“Texas Flood was born as Voodoo Blue, which was Steve’s band, originally,” says Katona. “He had different bands over the years, but the three of us, we’ve been together for a little over 10 years.”

The group performs in concerts and at private parties, sometimes mingling their own music with various covers. Things were thriving, Buckner says, until the COVID-19 pandemic stretched its gnarly fingers across the country.

“Whenever we were starting 2020, I mean, our calendar looked super strong,” he says. “It was going to be a great year. And then all that happened.

“This past year with COVID has been a real struggle,” he continues. “We’ve seen a lot of our venues close. Some of them are not coming back. The ones that remain are struggling, so we’re struggling right there with them. You can tell it’s stressful for everybody.”

“The musician playing blues is a specialty, [but] some places here, you go and play and the people may not be paying attention because they’re watching TV or watching their phones." – Texas Flood's Tommy Katona

“Next, they were, like, ‘You’re a bar you can’t even have anybody at all,’” he says. “A month or two later, as long as a food truck was on hand in the parking lot they could open at 50 percent. It’s just been crazy.”

Everyone has been doing what they can “to keep their head above water,” says Buckner, adding that the situation has been especially dire for some bar owners who, even with limited occupancy, aren’t getting a break on the rent.

“They’re having to dip into their personal savings to pay the rent when they’re not open,” he says. “It’s heartbreaking.”

And that’s not all. Instead of playing a 90-minute set and calling it a night, Buckner says bands may need to play two 90-minute sets because of occupancy limits.

Clueless what the future may hold, Buckner can only hope that venues return to 75% occupancy soon and 100% before the year ends.

While things have been “a little more difficult than ever,” Katona says the band has been “lucky” that their schedule hasn’t stalled out during the pandemic. For now, Texas Flood is playing live concerts in Houston as well as at local venues like Fat Daddy’s in Mansfield and on a show scheduled for Feb. 6 at Arlington Music Hall where they’ll play tribute to Vaughan.

Reflecting on what initially drew him to America, Katona noted that he’d learned a lot from other musicians.

“Well, you know, this is the home of this music,” he says. “Especially in the South, Texas and the Southern states … I had to get a good taste of the culture here, especially musically.”

Katona also noted the contrast between European and American audiences.

“The musician playing blues is a specialty,” he says," [but] some places here, you go and play and the people may not be paying attention because they’re watching TV or watching their phones.

“They have it,” he says about the authentic sound, “and they kind of take it for granted sometimes.”
KEEP THE DALLAS OBSERVER FREE... Since we started the Dallas Observer, it has been defined as the free, independent voice of Dallas, and we'd like to keep it that way. With local media under siege, it's more important than ever for us to rally support behind funding our local journalism. You can help by participating in our "I Support" program, allowing us to keep offering readers access to our incisive coverage of local news, food and culture with no paywalls.
Make a one-time donation today for as little as $1.