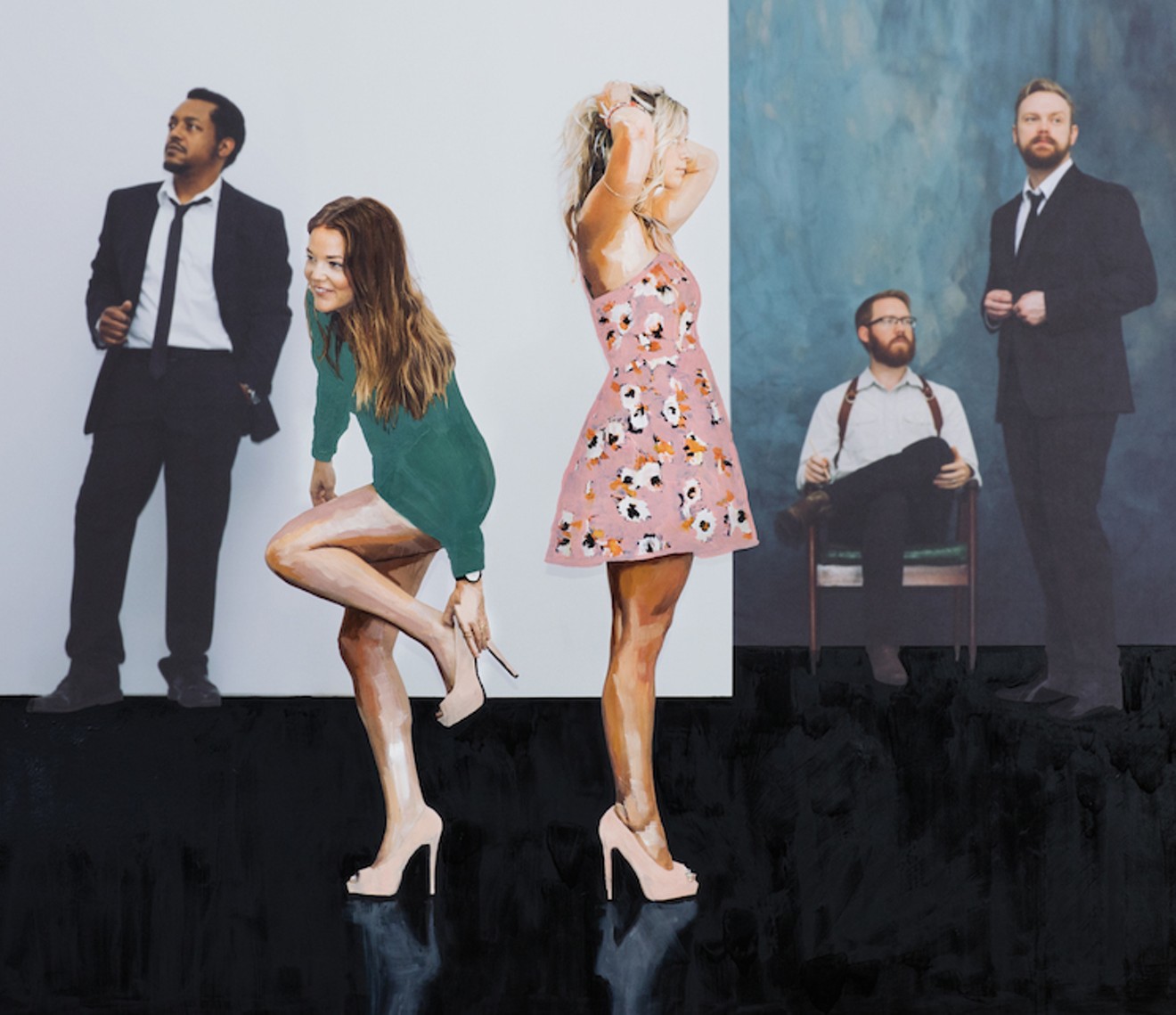 The album's cover is a collaboration between Paxton Maroney, Amanda Page and Haylee Ryan, who is also a painter. courtesy the artist
On a weekday afternoon in Oak Cliff, artist Haylee Ryan is trying to juggle both a guitar and her 10-week-old Dalmatian puppy, Sugar, who's about to knock over a glass of wine. Ryan’s best friend, Amanda Page, is tending to an older Dalmatian named Sister while finishing Ryan’s sentences.

Sister is also the name of their bluesy, ethereal, at-times-Americana rock group. They are both palpably excited because this is their magnum opus. After playing together for almost 13 years, they have a debut album, Spiraling Minds, which will be released at a party at Three Links tonight.

Ryan and Page first met as teenyboppers at their church’s youth group. “We collided and became best friends,” Page says. Theirs started out an inconvenient friendship. Page was three years younger. She lived in Plano while Ryan lived in Irving.

Page’s upbringing was cloaked in musicality: She’s a classically trained opera singer and the daughter of a pastor. Two framed record sleeves of a 1970s husband-and-wife Christian singing duo, Page's parents, hang in the hallway of her apartment with Ryan.

Like most preachers' kids, Page spent a good chunk of her formative years standing and singing in a front-row church pew next to her mom. That’s how she learned to harmonize.

“I could just hear her voice," she says. "They played the same songs pretty much every week. I would hear her part, and that's how I learned to do it.”

Ryan's life was markedly less musical. “She didn't know how to sing or harmonize,” when the pair met, Page says. Actually, she sort of sang.

“I sang creepy R&B songs. All nasally," Ryan says, then pauses to demonstrate. "My ability to sing and harmonize now, that’s because of Amanda.”

Also because of Page, Ryan taught herself to play guitar, and after church, they’d hunker down in Page’s parents’ bathroom and write “creepy Christian songs” together. The bathroom had good acoustics.

Beyond the bathroom sessions, “we don’t talk about youth group,” Ryan says.

What they do talk about, today at least: harmonizing. They speak of its complexities and nuances with wide-eyed fervor. “I sing harmony to a clock,” Page says.

They haven’t always lived together. After studying art at the University of Dallas, Ryan lived in Spain. Page was in West Texas, and later they both moved to Oregon. When Page and Ryan returned to Dallas, they became roommates and started playing casual shows. They built a local following based on word of mouth but never recorded anything. There was an opening routine each time they’d go onstage.

“And we’re Haylee and Amanda,” they add in unison.

They mostly played covers, including an often-requested, bluesy rendition of “Baby Got Back.” Then one day, they woke up and decided to get serious.

"We thought, we don't even love that. We love rock, and we love blues. We don't want to sing quietly. We want to belt our voices and have energy. We were like, we've got to change directions,” Ryan says.

But the only original material they had amounted to a few songs Page had written on her iPhone. They also needed a band but had no potential members in mind.

So they started telling every stranger they met. “We just started saying it out loud to people in public when we would go out, ‘We’re starting a band called Sister.’"

That’s how they met their bass player, Chadwick Murray, of MUR and Bastards of Soul. They were blown away.

“He had a little afro back then,” Ryan recalls. They approached him after he played a show at Foundry with MUR. “We were like, ‘Hey, we just wanted to tell you how much we loved this.’ He said, ‘Are you Haylee and Amanda?’ Which was creepy because we were nobody.

“He said, ‘I heard you guys singing, and I loved it so much.' Then it was like, 'Plus, you're hilarious.' He said, 'If you're ever thinking about starting a full band, let me be your bass player.' We were just like —"

“We are thinking about that," Page chimes in. They felt an instant connection to him and invited him over for dinner. “Literally from then on we started making dinner every week, and he'd come over and we'd write music."

Murray started going to their house every Thursday night. “We would play him the songs we had, and he would write the baseline to it," Page says. "We also became best friends with him.”

It’s a mutual admiration society between the two women and Murray, who recalls their initial meeting with equal vividness. “I recognized them immediately,” he says. “And I’d always wanted to work with female vocalists.”

The rest of the group took some time to solidify. A few members came and went, and they played occasionally at Twilite and House of Blues. Then they met drummer Aaron Stanfield and guitarist Ian Ferguson.

“When we finally found our group, we were like, ‘OK, we should record an album now because these are the people we like,’” Ryan says.

They recorded the album at Tomcast Studios in two rooms at the same time, listening to each other through headphones. This is unusual. “Usually everything is recorded separately,” Page says, “But we've been singing together so long live, we like to just —"

“Move with each other,” Ryan says.

So they asked Tom Bridwell, the recording engineer, if they could sing at the same time. “He was like, 'Let's try it,'" Ryan says.

They recorded the album in 16 hours. There were a lot of one-take wonders.

“That’s a testament to how tight we are as a band, and vocally," Ryan says. "There would be a song where the first take is the one we ended up using, but we'd take a second or third just to make sure. That was kind of fun. Tom was like, ‘I can't believe we did this in two days. That's insane.’"

While they were recording, “the boys” asked Ryan and Page how they were able to predict what the other would do vocally before it happened. How did they know to switch harmonies like that on a moment's notice?

Ryan cuts in. “That's what I was going to say.”