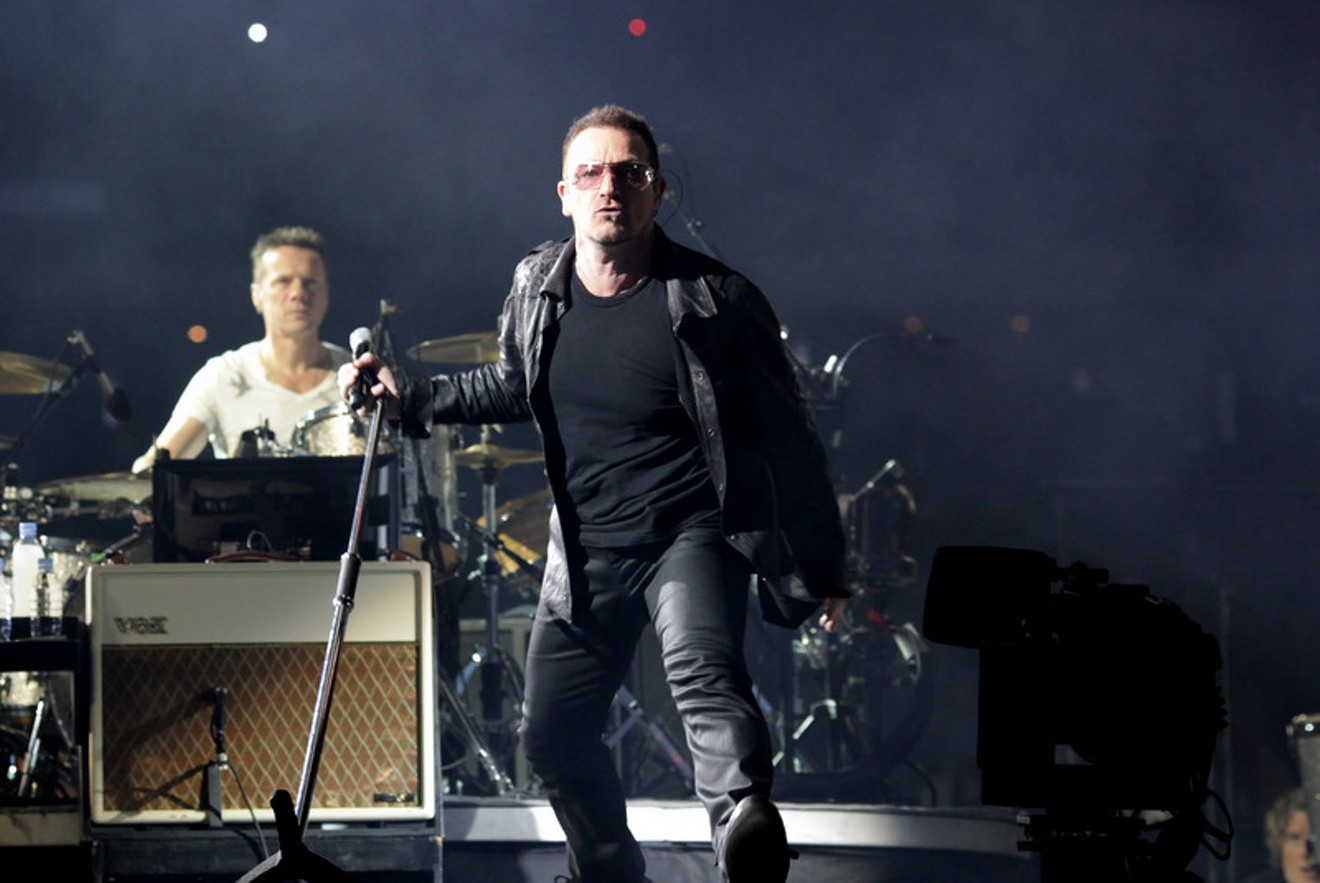 The real Bono playing in Arlington in 2009. He was not in Dallas on Friday, as far as we know. Hal Samples
Mi Cocina has a new item to add to its non-authentic menu: imitation rock stars.

On Friday, the verified account for shopping center Highland Park Village tagged the restaurant with the caption: “You never know who you’ll run into at the Monkey Bar! We hope you enjoyed your time Mi Cocina, Bono. Cheers!”
The photo shows a man and a woman posing with someone who looks like U2 frontman Bono, but most likely is not, given that Bono, who was born as Paul Hewson, has a different face.

We gotta give it to Imposter Bono, though: It is hard to replicate the singer’s height. And Bozo makes a great Bono forgery. The photos show a man who looks like Bono but even more so like a Bono impersonator named Pavel Sfera, who charges $100 for a cameo video.

But as far as we know, the real Bono was not in Dallas on Friday but sitting at home in Ireland plotting how to next assault our phones with unsolicited album downloads.

The excited couple in the photo seemed to jump the gun by posting the photo before doing a sober image search for "Bono," but we can't blame them entirely for being naive: Some famous folks are impossible to recognize once they spread their face cheeks wide open for plastic surgeons. But the couple really should’ve asked their friends before posting it to the unkind internet, which is now treating the pair like the Highland Park Village idiots.

Commenters on Facebook were quick to point out that the Bono in the photo was not the bona fide Bono. And the OPs weren’t the only ones to seemingly get duped by Bobo. On other threads sharing the original posts, some commenters left screenshots with other Dallasites who claimed to have met Bono in Dallas this weekend.

It is unlikely that Bono, the big-time activist whose sunglasses are at this point tattooed on his face and who is famously anti-Trump, would be caught eating at Mi Cocina, a restaurant owned by Trump megadonor Ray Washburne. But hey, we’ve all abandoned our beliefs for some good Tex- ...Tex.

This isn't the first time in recent years that locals have embarrassed themselves online by posting from a Mi Cocina. There was a husband who went viral in early pandemic times when he tweeted photos of his sad wife waiting at the Allen Mi Cocina for cheese for her fajitas for 18 whole minutes.

So the overeager U2 fans shouldn't feel so bad. Someone please take them to the Hollywood Walk of Fame so they can meet the real Marilyn Monroe and Spider-Man all in one day.
KEEP THE DALLAS OBSERVER FREE... Since we started the Dallas Observer, it has been defined as the free, independent voice of Dallas, and we'd like to keep it that way. With local media under siege, it's more important than ever for us to rally support behind funding our local journalism. You can help by participating in our "I Support" program, allowing us to keep offering readers access to our incisive coverage of local news, food and culture with no paywalls.
Make a one-time donation today for as little as $1.