Host Your Own Errol 'The Truth' Spence Jr. Victory Parade With This Dallas Playlist 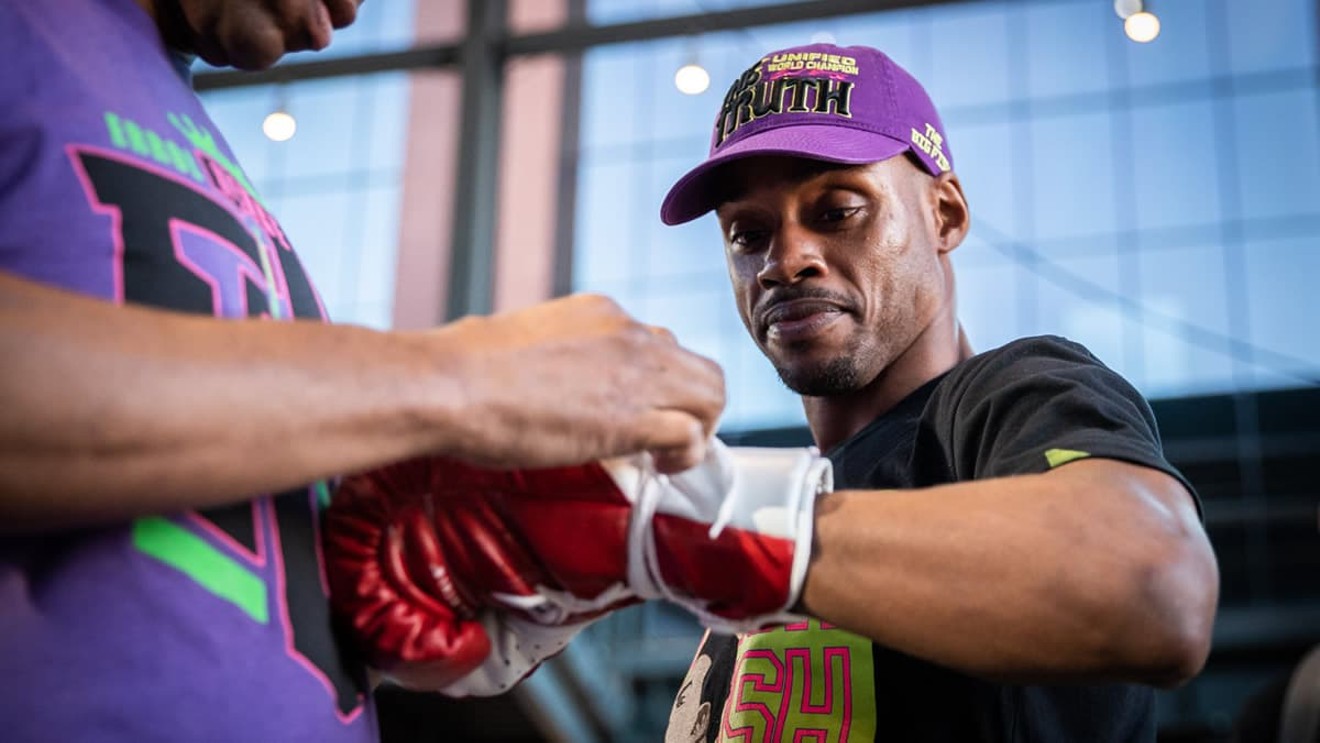 Errol “The Truth” Spence Jr. hosted his biggest fight yet on Saturday at AT&T Stadium. Amanda Wescott/Showtime
DeSoto’s own undefeated world boxing champion Errol “The Truth” Spence Jr. had boxing fans from all over the world invading Arlington’s AT&T Stadium on Saturday, April 16, for his bout with WBA welterweight champion Yordenis Ugas. The Truth silenced every naysayer with a defining performance that earned him his third title.

Fight week was a monumental occasion for Dallasites, out-of-towners and for the hometown hero. It included the ongoing taping of the Showtime Emmy-winning series All Access: Spence vs Ugas, media appearances and public workouts. Mayor Eric Johnson even declared April 16 “Errol Spence Jr. Day” in Dallas during a special presentation ceremony at World Class Boxing Gym in DeSoto on Monday, April 11.

And with fight fans filling up the 80,000 capacity in Jerry’s World to watch Spence make his return to the ring following an 18-month layoff and his first time fighting for a world title in front of his hometown, the victory deserves its own DFW hip-hop-centric parade to praise the former Olympian and his love for the city.

Since the beginning of his professional career, Spence, 32, has shown his hometown pride on a worldwide scale by incorporating local hip-hop stars (such as Yella Beezy and Trapboy Freddy), using their music to usher him to the ring on fight night. So to celebrate The Truth’s return and win, we have compiled a list of Dallas-themed songs that connect the best pound-for-pound boxer with the best of Dallas hip-hop.  Dirty South Rydaz (DSR), “Southside Tha Realest”
Spence made his return with the legendary Big Tuck paving the way, performing the definitive classic on Saturday night. Dirty South Rydaz’s 2004 classic is the definition of DFW hip-hop as it stands the test of time and was birthed by many of the genre’s biggest names today. The beat dropped and Spence, with coaches, walked out to 80,000 fans behind him singing, “Southside is the realest, I’ma make you feel it …” It was just legendary.

Yella Beezy, “Pay For It”
An underdog anthem that depicts the city’s grit-and-grind mentality, the unreleased track was featured on Errol Spence Jr.’s promotional video and fans flooded the boxer’s Instagram comments instantly asking where to find the Beezy track. The song’s lyrics speak to Spence’s journey and reaffirms Beezy’s greatness as he preps for his upcoming album, the first in his new deal with Asylum Records. For his best friend Spence, Beezy speaks to the champ’s resilience with lyrics like, “Yeah, they turned their backs on me / Made their little jokes and capped on me / But I kept it solid, that’s facts, homie / Tried to show them love.” Tay Money, “The Assignment”
The Truth is one of the biggest stars in boxing, and Big Tay is one of the biggest star in Dallas hip-hop. Tay Money’s viral hit fits the spirit of Spence’s objective: unifying the welterweight division with all four belts (WBC, WBA, IBF, WBO) under his name before he ascends to the next division. The common ground between Money and Spence is having had to prove doubters wrong and overcoming various adversities. “The Assignment” catapulted Tay Money from a regional favorite to headlining her own nationwide tour, which began this month. Hollywood Bay Bay ft. Young Dolph and Trapboy Freddy,“Trap”
K104’s Hollywood Bay Bay’s 2020 hit “Trap” featuring fellow Dallas star Trapboy Freddy and the late-Young Dolph, is another perfect ring walk song for The Truth. As he has mentioned before in interviews, once the bell rings there is no way out. “Trap” talks about street smarts, hustle and having a strong presence. Bay Bay’s quarterbacking Trapboy’s Oak Cliff lingo with his hyper-active ab-libs and viral dance moves make for the perfect example of the feel-good nightlife vibe the city has to offer.
Treal Lee & Prince Rick ft. Wideframe, “Mr. Hit Dat”
Another classic cut that epitomizes a historic time in Dallas hip-hop, the rowdy track motivates everyone to turn up and show out with its combination of heavy bass and sing-along boogie gimmick. Like Spence, the song is slick, hard-hitting and game-changing. “Mr. Hit Dat '' is still as fresh, exciting and in popular demand since the day it was released in 2009. After the champ served Ugas an orbital fracture with a seventh-round uppercut, we guarantee you heard this club classic play at the late-night peak hour in V-Live, the fight’s official afterparty
Rakim Al-Jabbaar and MenaceTheDJ, “Rules”
Rakim Al-Jabbaaar’s latest project, IllDallas, has received rave endorsements from several iconic hip-hop figures such as MC Serch of the legendary group 3rd Bass. The popularity of the album can be credited to Al-Jabbar’s honesty, knowledge and razor-sharp flow on tracks such as “Rules” featuring MenaceTheDJ. Using knockout punchlines to tell his eye-opening perspective on city issues, “Rules” proves naysayers wrong taking it back to basics with bars proclaiming this year as Al-Jabbaar's career-best. To know where he's about to go, he recalls where he comes from: “I remember when nobody else believed in me / Now they all want to occupy this scenery / I’ve been solo, blowing on the finest greenery / that might be a ho in you but she’s a Queen in me.” BigXthaPlug, “New Day”
“New Day” is perfect for Spence’s return. Surviving a car crash and the subsequent surgeries — everything is behind him now. The fighter is refocused, back to his strap season persona and has years of career-defining moments ahead of him that have been prophesied by plenty of boxing legends. BigXthaPlug is the face of the new wave in Dallas hip-hop. His heavy tone, undeniable charisma and boasting and bragging rap style is unique. “New Day” has spread outside North Texas into the West Coast and East Coast, where they're learning Dallas’ inner-city activity.
BL Double, “First Day Out”
Fights are the most entertaining when there is a compelling story behind them. Dallas hip-hop’s foundation is built on storytelling. Spence is returning to the ring for the first time in 18 months with a story to tell of determination and triumph. Fresh recording artist BL Double has one of the realest tales told on a mic in his new song “First Day Out.” The track has generated a large following for the Arlington native as it tells a crazy true story of him beating a series of court cases that saw him facing serious federal time. Now, like Spence, with a second lease on his career, Double has been dedicating all his focus on music and he's one of the hottest new artists to watch in 2022.
KEEP THE DALLAS OBSERVER FREE... Since we started the Dallas Observer, it has been defined as the free, independent voice of Dallas, and we'd like to keep it that way. With local media under siege, it's more important than ever for us to rally support behind funding our local journalism. You can help by participating in our "I Support" program, allowing us to keep offering readers access to our incisive coverage of local news, food and culture with no paywalls.
Make a one-time donation today for as little as $1.