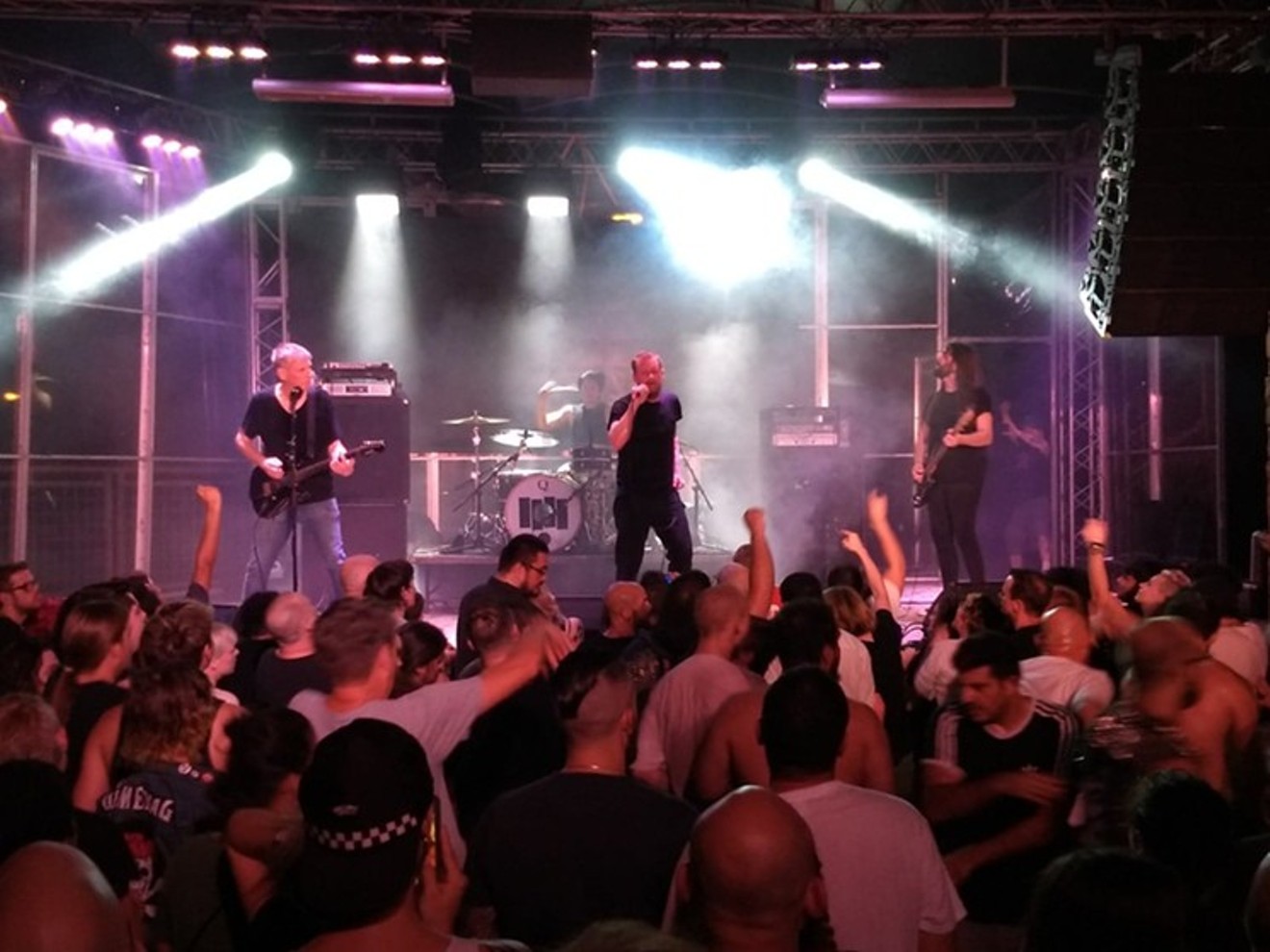 Black Flag playing at Gas Monkey Bar 'n' Grill in 2019. Darren Haffner
Gas Monkey Bar ‘n’ Grill announced this week that it will be closing its doors through the winter in response to  the ongoing pandemic. According to the venue’s website, “Ticket buyers for any show that will be canceled will be contacted through email and fully refunded.” The venue intends to reopen in 2021.

In response to the news of Gas Monkey’s temporary closure, The Rail Club in Fort Worth announced via their Facebook page they are open for any bands looking to fill some missed dates. Shows will be BYOB for the time being.

Every student at Grapevine High School was gifted a new pair of the new Post Malone x Crocs Duet Max Clog II on Tuesday. The rapper sent nearly 2,000 pairs of the new pink and black clogs to every student in his former high school in coordination with their national release. The Crocs sold out nationally within hours.

The Dallas Police Department charged 21-year-old Kewon Dontrell White with the murder of rapper Mo3 on Wednesday. The rapper, whose real name is Melvin Noble, was shot and killed in the middle of the day, Nov. 11, on northbound Interstate 35 near Clarendon Drive as he ran from his attacker. The motive has not been established.

“Vaquero,” Ottoman Turks’ second single from their upcoming sophomore album Ottoman Turks II (scheduled for March 5), is out now on all platforms. The band cranks up the cowpunk energy on the track with a new, skater-filled video directed by Dylan Huddleston

Alt-pop artist JMES (pronounced “James”) is releasing her second single “Ready to Love Again” on all platforms Dec. 11. The 20-year-old singer’s dreamy new single is based on her experience reconnecting with a past love during the COVID-19 pandemic.

If you Google the term “metalliviolence,” you will likely find more information about YATSU, who has coined the portmanteau of “metal” and “powerviolence” — a dissonant and sped-up subgenre of hardcore punk. The band’s Three Instrumentals Y’all (released Dec. 9), riffing on the title and cover of Limp Bizkit’s debut Three Dollar Bill, Y’all, is a fast and heavy preview for their upcoming It Can’t Happen Here LP, due out next spring.

Southern rock band the Mason Adams Project will be doing something a little different with their livestream on Wednesday, Dec. 16. Along with the usual live performance streamed for your at-home enjoyment, the MAP Family Virtual Ho-Ho-Ho Down will offer viewers a tip menu for some additional fun. A $20 tip, for instance, will earn a personal shout out from the band; for a $50 tip, the band will play blindfolded; and for $75, you can hear an improvised song with your name in it.

Anyone who might be interested in some country-fried hippie-hop have a new single to check out from indie rapper SniperShot. “Texas Flag,” from his September release True Story, proclaims the artist’s love for East Dallas with a lo-fi video featuring shots from around the city.

Joshua Ray Walker will be playing his only hometown shows of 2020 this Saturday at the Kessler. Due to the overwhelming interest in Walker's concert, an early show has been added for that evening.

Justin Tipton & The Troublemakers will also be playing Friday night at the Jaxon Beer Garden in Dallas.

On Sunday Dec. 13, The Vampire Court of Dallas presents Holiday Horror: Santa’s Return — A Toy Drive Benefiting New Beginnings Center, at It’ll Do. Attendees are asked to bring a toy to donate in exchange for a free drink. Leah Lane of Rosegarden Funeral Party will be DJing.

That same Thursday night, Austin Americana artists David Ramirez and Grace Pettis will play the first of two shows at Tulips in Fort Worth. The second show will take place the following night.
KEEP THE DALLAS OBSERVER FREE... Since we started the Dallas Observer, it has been defined as the free, independent voice of Dallas, and we'd like to keep it that way. With local media under siege, it's more important than ever for us to rally support behind funding our local journalism. You can help by participating in our "I Support" program, allowing us to keep offering readers access to our incisive coverage of local news, food and culture with no paywalls.
Make a one-time donation today for as little as $1.