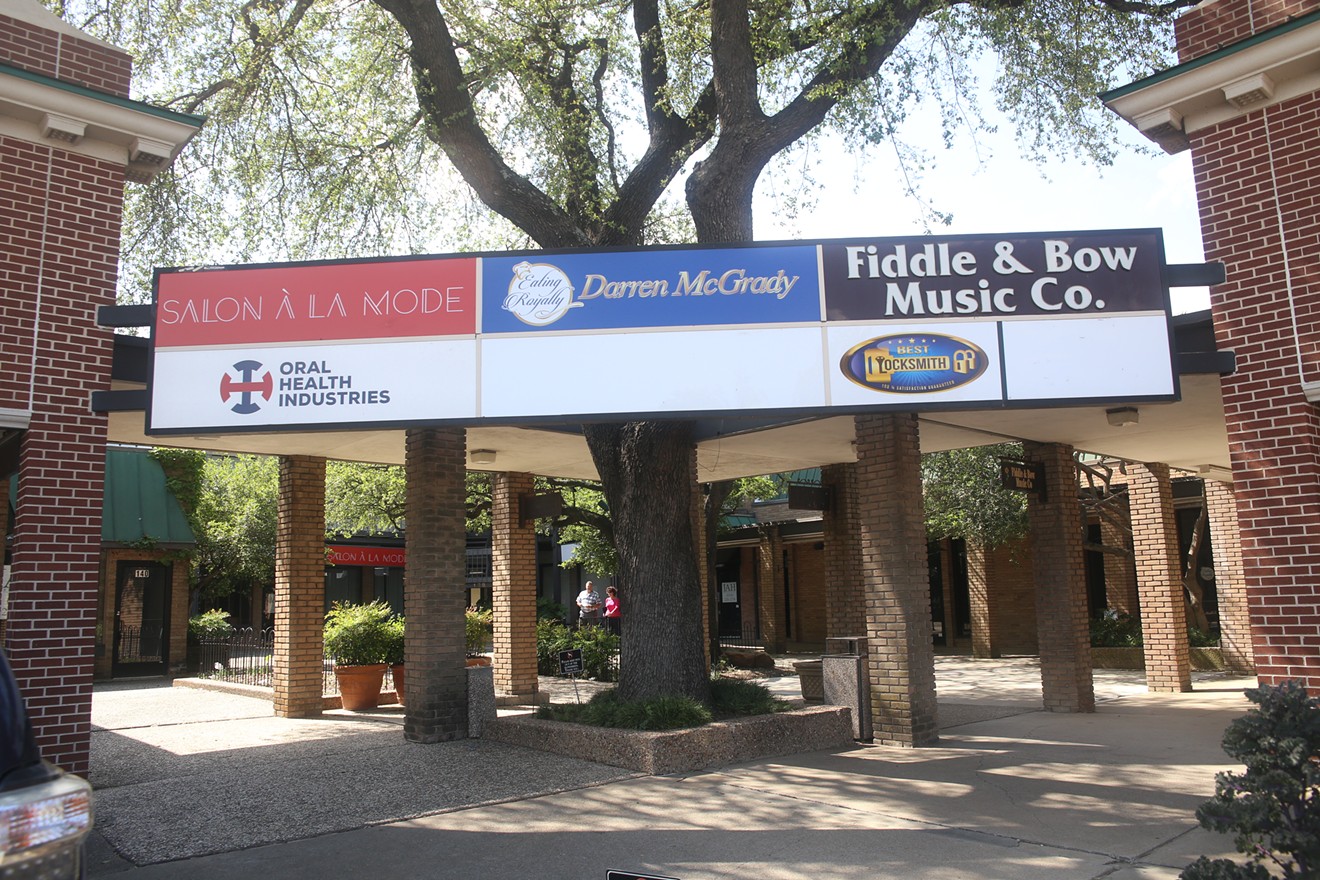 The Fiddle & Bow Music Co. shares a courtyard with Salon A La Mode, which is a recent gathering spot for armed protestors. Jacob Vaughn
People gathered outside of an old Dallas shopping strip. Some wore masks and others openly carried firearms. One held a flag that bore the words: "Trump 2020 — Make America Great Again." They were rallying in support of Shelley Luther and her business A La Mode, the Dallas salon that defied a rule dictating that nonessential businesses stay closed for now.

While these demonstrations have been helpful for A La Mode, Rob Case, a local musician and business owner, says they are hurting his music shop Fiddle & Bow Music Co., which is adjacent to the salon. The two businesses share a small courtyard patio on Belt Line Road in Far North Dallas where demonstrators and media members have been ever present lately.

Case opened the shop 23 years ago with his brother. They mostly conduct music lessons, but Fiddle & Bow also rents and restores instruments for local musicians. Since the pandemic broke out, Case has been able to transition most of his music lessons online but has shut down his retail operations.

Fiddle & Bow, like the salon and so many other businesses across the country, has suffered significant financial losses during this time.

“Our revenue is roughly half of what it used to be,” Case says.

He would like to start safely taking in customers again, but Case believes his clients are not willing to walk through a crowd of demonstrators to get to his shop.

“You cannot get into my shop without walking through the crowd of demonstrating people with ... weapons,” Case says. “I’m not so much intimidated by the weapons — I’ve been around them my whole life; I’m really intimidated by the lack of social distancing. It’s not safe out there.”

Texas Gov. Greg Abbott has laid out a multi-phase plan for reopening the economy. The salon would have been able to reopen in the second phase of this plan, around May 18, but Luther says she could not wait that long and reopened her shop on April 24.

“The stylists were starting to get nervous because they couldn’t pay their bills,” Luther says. “I was having a hard time because I wasn’t making any money either, and nobody was getting any government assistance, so we just decided the only way we could make money was to open.”

Luther made a post on her social media page the day before she planned on reopening, informing potential customers that the salon was back in business. It had been closed since March 22.

There weren’t any demonstrators on the courtyard patio this past Saturday, but a handful of customers waited outside for their turn in the salon. Gloria, one of the employees at A La Mode, said they are still practicing social distancing, keeping customers more than six feet apart from one another.

Case says, “As a business owner, I can kind of relate, except I don’t want my customers to all fall ill and make me sick and have my elderly family members drop dead because of it.”


“It’s not my responsibility to tell them what to do...I’m not their mom.” – Shelley Luther on protesters

Luther wouldn’t say whether there are any health risks to people gathering outside her business. She said her supporters are adults who can make their own decisions.

“It’s not my responsibility to tell them what to do,” she says. “I’m not their mom.”

If she asked her supporters to disband, she says they would. However, she says she would never ask them to leave.

“The whole purpose of me opening my business is because it’s my right to do so,” she says. “That would be hypocritical for me to go to them and say ‘You don’t have the right to do that,’ because they do.”

But, Case points out, COVID-19 has not paid any attention to people’s rights.

Despite receiving a cease and desist letter from Dallas County Judge Clay Jenkins, which she tore up in front of a rally of Open Texas demonstrators in Frisco, Luther says she has no plans to close her salon.

“We’re gonna stay open as long as I can help it,” Luther says. “They have not been able to do anything to shut us down.”

If Luther could get her supporters to stay in front of her salon, away from Fiddle & Bow, Case says he’d be able to start taking customers again. Luther says she is open to a compromise, but that Case hasn’t reached out to her directly.
KEEP THE DALLAS OBSERVER FREE... Since we started the Dallas Observer, it has been defined as the free, independent voice of Dallas, and we'd like to keep it that way. With local media under siege, it's more important than ever for us to rally support behind funding our local journalism. You can help by participating in our "I Support" program, allowing us to keep offering readers access to our incisive coverage of local news, food and culture with no paywalls.
Make a one-time donation today for as little as $1.