Frisco resident and Texas country musician Dalton Domino says his newfound sobriety was the inspiration for his sophomore album. courtesy daltondomino.com
Texas country musician Dalton Domino arrives at Starbucks on Oak Lawn sporting a short-sleeve, pearl-snap button-up and his favorite cowboys shoes, the ones his grandmother gave him. They're duct-taped together. He looks around to see he is surrounded by preppy Uptown bros.

At a patio table, he chugs his bottle of water and props his feet up on a chair. He begins his first of five cigarettes in an hour. Chain smoking is a new experience for Domino, and he says it helps ease recent bouts of anxiety.

Domino stopped drinking in April 2016. After a four-day relapse in January, he is sober again. Before the relapse, he had an entirely different album written and ready to release.

“It could have been safe with radio, safe with fans, but I got to the point where I just hit a bottom,” he says. “I hated music; I hated my life; a lot of self-loathing was going on. And I just needed a change. I quit drinking and I sat down and basically relearned my instrument.”

He scratched that album and instead wrote Corners, which was released April 28. The 26-year-old wrote most of the album by himself, minus two songs, which have co-writers.

Corners, his sophomore album, features several songs about getting clean. He says he wrote a majority of the songs during the first 90 days of sobriety the second time. The other songs are about past relationships, love lost and like any good country album, infidelity. The standouts on the album are easily the first single, "July," and "Mine Again," both about past relationships.

Domino wrote "July" after finding his girlfriend with another man. He sings, “He ain’t me/You and him both know he’ll never be/He’s just convenience and you’re just a scared little girl with insecurities.”

He says they broke up shortly after because of the infidelity, leading him to write the song, and then they got back together.

"We were still fucking together when we recorded the song and it was a single,” he says. “I played it for her on her bed. I said, ‘I wrote a song about you.’ She was pissed."

The relationship ultimately failed. "We both reached a point where we both realized, in hindsight, we didn't belong together.” he says.

In contrast, "Mine Again" is an apology song to the woman he wrote his first album about. "I was an asshole to her,” he says. “I exploited the relationship that she didn't have any say in. I just basically said, ‘Fuck you, I'm going to write about,’ which that wasn't cool.”

He's not predicting a similar emotional turnaround with his most recent ex. "No," he says. "It was kind of one of those things, where it was like, 'You cocksucker.'"


The one time Domino shows any kind of giddiness or excitement is when he's talking about meeting his heroes in Texas country music. When he needs advice, he says he calls either Cody Canada or Wade Bowen.

"I think that's what impresses me most about Dalton is the really very little fear with him when it comes to a lot of things in his career," Bowen says. "I think he's just enough crazy to be really, really cool, if that makes any sense. He has a don't-give-a-damn presence when I'm around him to where I'm not quite sure if he has it together, but at the end of the day, he really does. I think that's a really cool combination that could really set him for a lot of success in this business."

Because his album comes from such a specific, personal time, Domino says he doesn't think he'll ever be able to write another one like it. "This record means a lot to me,” he says.

Sobriety has changed a lot of things for the Frisco resident. Now, he says, he's more attentive and doesn’t have to fear getting pulled over drunk. But anxiety has creeped up on him.

“That's something I'm still working on,” he says. “When I walk into a building, I always find my exits; I always have an exit plan. I'm not afraid to say, ‘Hey, I got to get the fuck out of here. Nice meeting you,’ and bail.”

To calm the anxieties, he has replaced drinking with smoking cigarettes, jogging or praying.

"Praying is something I do every single day,” he says. “I pray and I meditate. And if I don't meditate and pray or just five seconds of just, ‘Thanks for letting me wake up this morning,’ my whole day is fucked up. It's almost like a ritual type thing. We pray before shows and whether it's a Christian God you believe in, a Buddah, Allah, whatever, it always helps to have that.”

On May 9, Rolling Stone listed Domino as one of its country acts to watch. In response, Domino posted an honest and heartfelt Instagram post. Even though Rolling Stone thought enough of him to include him on the list, he was tired, he missed home and he only had $72 in his name. 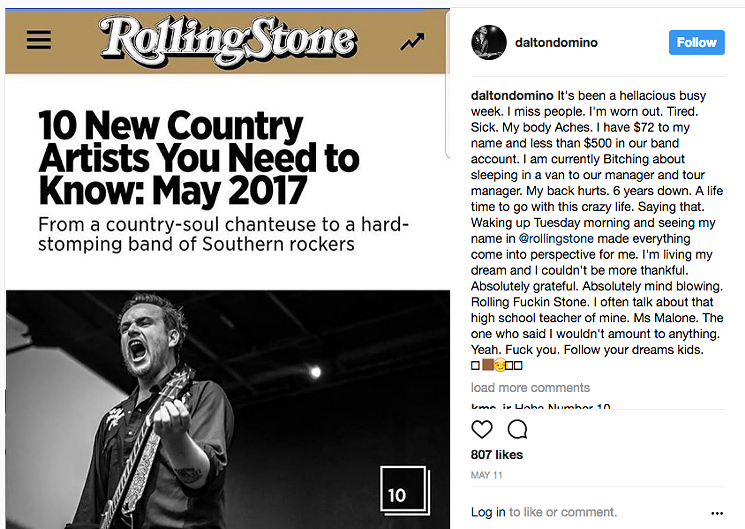 Dalton Domino via Facebook
KEEP THE DALLAS OBSERVER FREE... Since we started the Dallas Observer, it has been defined as the free, independent voice of Dallas, and we'd like to keep it that way. With local media under siege, it's more important than ever for us to rally support behind funding our local journalism. You can help by participating in our "I Support" program, allowing us to keep offering readers access to our incisive coverage of local news, food and culture with no paywalls.
Make a one-time donation today for as little as $1.