Dallas native Dezi 5 is back in the spotlight with the song "Lady." Corey Tut

Our city was graced this past week with the exuberant presence of an artist who has been rightfully missed.

Dallas native turned New Yorker Dezi 5 returned to the city that raised him for a week packed full of musical merriment. In his time back, he graced various local stages as more than just a performer, but as a comrade returned from the wild to take part in the biggest music event of the year in Dallas.

Aside from performing at The Free Man on Sunday night, the singer/songwriter was here to enjoy the Dallas Observer Music Awards Showcase last week, which welcomed a night full of performances of various genres, many of whom are his old friends. But the highlight of his return was being welcomed as host of the DOMA ceremony on Tuesday night, in which he opened the show with a luscious performance of his new single “Lady” released just last Friday.

In a performance that undoubtedly made the audience weak at the knees, Dezi towered above the crowd in platform boots and a bouncing hot pink tulle dress that gave us a little taste of New York City glam right here in Dallas.

“Wearing the dress was so much fun,” he says of his ostentatious getup, which was accompanied by massive, vintage black sunglasses.

“It’s different here now," Dezi says of his hometown. "Not everyone’s originally from Dallas anymore. It’s becoming one of those places that reminds me of a melting pot, like New York City.” 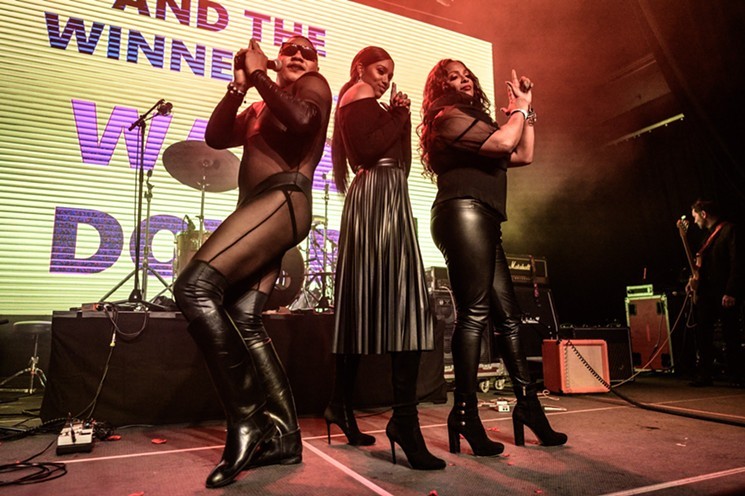 Dezi 5 hosting the Dallas Observer Music Awards, with presenters Christy Ray and Spinderella.
Mike Brooks
Since moving to NYC in 2017, Dezi 5 has continued to make regular trips back to perform throughout the year. While in New York, he DJs, party plans and performs at notable lounges and clubs, including the legendary Bitter End and Mercury Lounge, as well as large drag festivals, like the Bushwig Festival. He says he finds comfort in these occasional trips home.

“You don’t see the connection that the Dallas music scene has in New York as much,” he admits. “It’s more the drag scene that’s very connected up there. We all know who’s playing, what club, what’s going on here and there. Dallas is just more tight-knit.”


“You don’t see the connection that the Dallas music scene has in New York as much. ... Dallas is just more tight-knit.” — Dezi 5

This is one of the reasons Dezi 5 returned to Dallas recently, to record his new single “Lady” that he opened the DOMA ceremony with. The ballad, which brings the electro-pop maven back to his R&B roots, is a slow-burning but red-hot R&B.

“I wrote the song in 2012 when I was in a rock ‘n’ roll band and kept it on the backburner,” the singer says, explaining that he reintroduced the song to his current label, 11A Records, who loved it. “So I came to Dallas to record it with KJ (bass) and Kwinton (keyboard) Gray, and Jackie ‘Juice’ Whitmill (drums).”

Aside from wanting his old band members to be part of the song he wrote long before moving from Dallas, there was also a deeper reasoning behind why Dezi returned to record the track.

“Those guys are like family, and the song was written for my grandmother, so I wanted to record it home where it was more personal,” he says, illustrating the emblematic nature of his latest track.

Dezi 5 continues to find beauty in having two homes though, here and in New York City, as he has several dates planned already to return over the next six months. He’ll be coming back down this way in just a couple of weeks: on Dec. 29, to take part in The Grays Classic: ‘90s Disney Concert; in April for the Thin Line Movie Festival in Denton; and again in June for pride month.

The singer pauses thoughtfully whether he would ever return to Dallas, but ultimately gives an unfortunate, probable no, “I just love New York. It doesn’t shut up,” he says. That doesn’t guarantee NYC as Dezi's permanent home. “My whole purpose of moving was to broaden my audience, so I do plan on moving beyond eventually," he says. "I just have a few more things to learn in New York City before I move on.”

Listen to "Lady" below: