The Dallas Cowboys' Pre-Game DJ, Elusive, Has Many Party Tricks Up His Sleeve 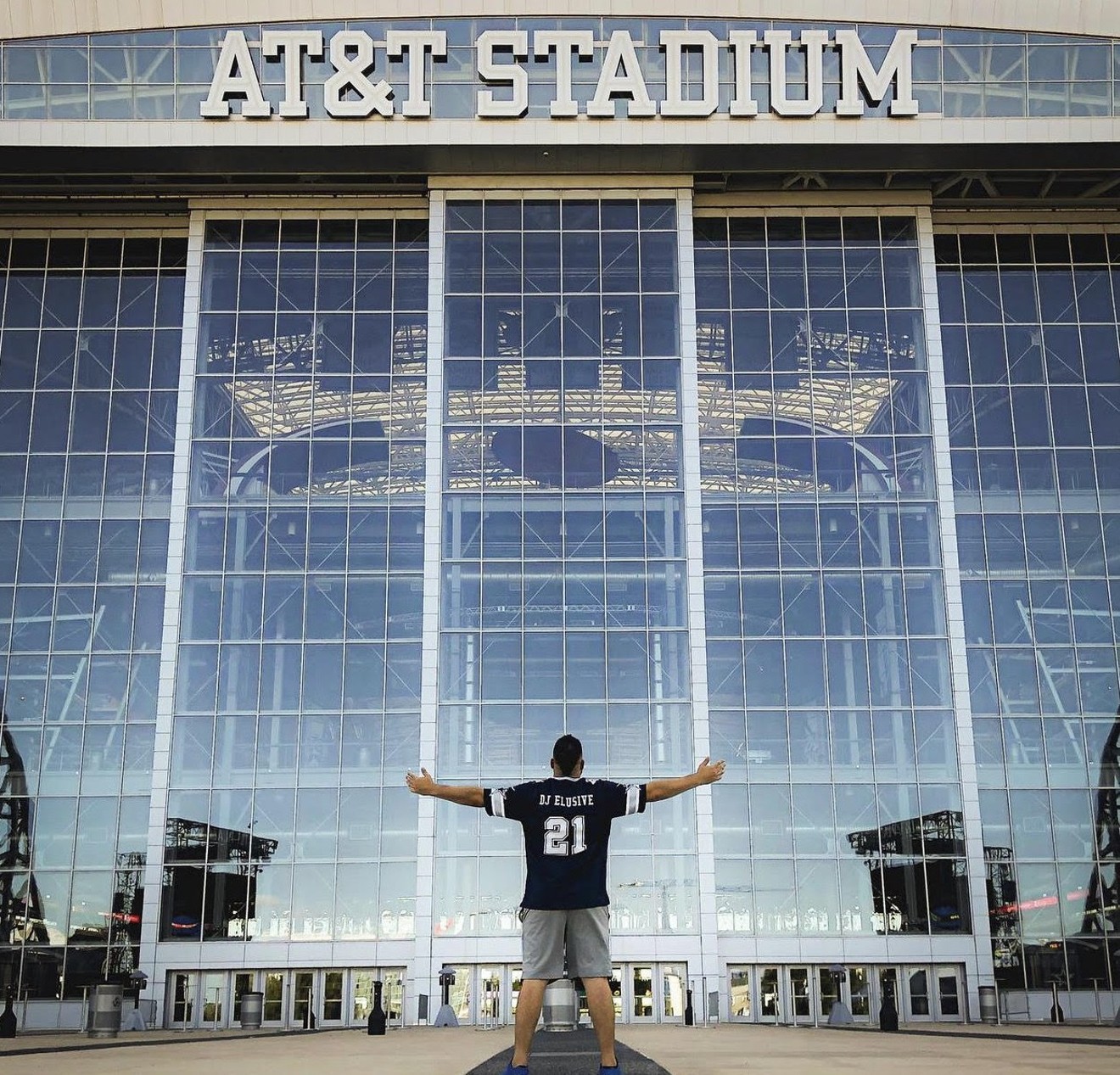 For the past two years, DJ Elusive has had a dream job working for the Dallas Cowboys. Phillip Villareal
The Dallas Cowboys are back in the hunt for their sixth NFL championship as the 2022–23 season begins this weekend, and one man will be tasked again with providing the players and fans inside AT&T Stadium with much-needed energy before kickoff. Chris Basto, known professionally as DJ Elusive, holds that honor.

“I’m back again for my 2ND Season with the @dallascowboys!,” he captioned an Aug. 15 Instagram photo that showed his 2022–23 schedule. “I’ll be providing all the pre-game music on the East Plaza before every home game! If you come out to the game this year come say hey!!”

DJ Elusive is the Dallas Cowboys' pregame DJ. Alongside Emmy Award-winning Cowboys host Ali Dee, Basto's responsibilities are to pump up the players and crowd before the upcoming game and to set the mood by generating excitement, energy and engagement with Cowboys fans before kickoff.

Bastos starts his set four hours before the doors open to the general public, for the "die-hard fans" with a "party pass" that allows them earlier access.

"So, a big part of my job is just making sure these fans stay hyped," he says.

As he explains, there is a limit to how much hyping that entails.

"A lot of it is just party music," he says, "but you have to know how to control that because it’s like you have to go up and down because too much hype you're gonna burn them out by the time that those doors open. So a lot of it is just programming the music correctly. A lot of times they do show up drunk already, so that makes it easier."

Basto has the best party pass of all. From his booth he gets to see first-hand the frenzy surrounding the team's biggest stars: the Dallas Cowboys cheerleaders.

"People will show up with binoculars just to see them, which is crazy; it's this big culture," he says.

The DJ says he tries to provide more than a soundtrack to fans' experiences.

"I try to engage with the fans a lot," Basto says. "Like who’s here for the first time? A lot of people. Who’s never been to a Cowboys game? You have people say, ‘Oh, we just got engaged and this is our honeymoon present,' or something like that. A lot of it is engaging with the fans to make sure that they remember their time at the Cowboys game.”

Most people would naturally assume that the DJing position consists mainly of spinning tracks on a turntable and yelling out hype catchphrases on a microphone to a crowd of fans. But there's a lot of meticulous planning and production procedures that go into the development of a pre-game show.

“It’s the music, but it’s also about getting myself ready, like what can I do to make sure I put on the best show?" he says. " ... So really for me, to sum it up, just figuring out new things to say or being that source of entertainment because at the end of the day, the camera is on me the entire pre-game. I don’t think I’m very interesting, so it’s like, I have to figure how to make moments, you know what I mean?"

And some of those moments on the job are easier than others.

Basto will be spinning tracks all season as the music director for Baylor University and Southern Methodist University home football games. Outside the stadiums, you may find DJ Elusive on the turntables at Dallas nightclubs throughout the week.

The Dallas native is a former radio DJ at 97.9 The Beat, and for the past two years he's been COO of the food and music event Carne Asada Festival. Basto was hand-picked by Cowboys music director Erik Jorgensen, better known as DJ EJ, at the beginning of the 2021–22 season.

As a lifelong Cowboys fan, Basto says he remembers like yesterday the surreal moment he got to put on the customized jersey for his first day as appointed pre-game DJ. He learned he'd have a new uniform at a meeting during the hiring process right after details such as his pay were discussed.
click to enlarge 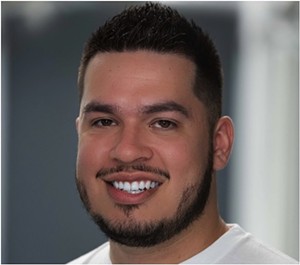 For Basto, being an honorary Cowboy is a gift far more rewarding than any social media clout could match.

"But for me, it’s more like on the branding side," he says. "An organization like the Dallas Cowboys trust me to run music. So I’m able to use it in the sense of like, if these people can trust me — the world’s most valuable organization — when it comes to, like, game day production and sports in general ... everything there is just done a very certain way, everything there is very on time, it’s honestly, it’s honestly a big honor to able to do that. You wear the Cowboys’ star, and you wear it with confidence."

A betting.com study released in July showed that the Dallas Cowboys have the most devoted fanbase in the NFL. According to ESPN’s First Take’s ratings, the Cowboys are the biggest trending topic in all sports, ever. On the I Am Athlete Podcast, First Take’s Stephen A. Smith said, “ … First rule of business in the world of media is that you talk about what’s relevant ... You think I like talking about the Cowboys as much as I do?”

Basto says that being a part of the organization these past few years has had a great professional, moral and cultural influnce on him. The organization has provided him with day-to-day lessons in branding, presentation and maintaining prestige.

“There’s a big part of the Cowboys, a ‘clean' image and it’s important for me, even as a dad, to keep a clean image and to do what I have to do in order to like … You go to a job interview, you don’t show up in shorts to a job interview," he says. "... So it’s one of those things where you have to be prepared, like you have to take a step back and think like, ‘OK, I DJ for the Dallas Cowboys.’ It’s a prestigious thing to be doing, so everything has to be on point. My presentation has to be on point. The way I put my cables, they have to be on point, because if my cables are out everywhere and I’m on camera, it just looks ugly. So I take it the extra step to be really organized. I wrap my cables a certain way or I make sure my shoe's not untied when I’m onstage."

Basto remembers all the mistakes made and the important lessons learned, like the time he went "too hard too early."

“I was really hyped,” he says. “For me, I gave them too much energy too early, and there’s a thing like that where you can tire a crowd out. So if you go too hard too early, they still gotta be there for two hours. ... There’s nothing else to do, they’re stuck with me."
KEEP THE DALLAS OBSERVER FREE... Since we started the Dallas Observer, it has been defined as the free, independent voice of Dallas, and we'd like to keep it that way. With local media under siege, it's more important than ever for us to rally support behind funding our local journalism. You can help by participating in our "I Support" program, allowing us to keep offering readers access to our incisive coverage of local news, food and culture with no paywalls.
Make a one-time donation today for as little as $1.