Bleed American is one of the most important albums of its time. DreamWorks

Few bands have one album that stands the test of time and resonates with fans decades later. Jimmy Eat World has two.

The first,1999’s Clarity, a compilation of some of the best emo to come out of the 1990s that could’ve been the band's last, as their label saw it as a commercial failure and cut ties with the Mesa, Arizona, quartet. Instead of calling it quits, Jimmy Eat World went on to self-fund their most important album to date, Bleed American, which earned platinum status and became their most commercially successful album, ushering in a new, third wave of emo. Twenty years later, it’s still a masterpiece.

Looking back, it’s hard to see how Jimmy Eat World suffered such misfortune with Clarity. It’s a beautiful album full of intricate, thoughtful compositions, a standard for the ’90s era of emo. It’s a critical darling, and was back then too. The sparkling single “Lucky Denver Mint” was included on the soundtrack to Never Been Kissed; the band spent six weeks on tour across the U.S. in an effort to promote the album and even appeared at that year’s Warped Tour. The lullaby-like “For Me This Is Heaven,” the peppy, upbeat title track or the less-polished demo version of one of the band’s later hit singles, a call-and-response anthem titled “Sweetness,” are testaments of the band’s exemplary talent in songwriting and vocalist/guitarists Jim Adkins’s youthful and incomparable voice.


But without its failure to meet major label sales standards in 1999, Jimmy Eat World might have been a relic of emo's past and likely wouldn’t have created their next album two years later, chock-full of shinier tracks that would change the trajectory of emo music from then on and earn them a spot on DreamWorks’ music label.

Jimmy Eat World’s music is often categorized in two ways: the Clarity era and the Bleed American era. But although the two albums are dramatically different, with Bleed American having much less complex arrangements than Clarity, they’re both undeniably, unforgivably Jimmy Eat World records at their core. Bleed American just offered a more universal appeal, taking its singles like “The Middle” (almost) to the top of the charts — a feat not accomplished by under-the-radar emo bands in years past. The rest of the album’s singles, a renewed “Sweetness,” “A Praise Chorus” and its title track, all did well, but it was indisputably “The Middle” — a simple, two-minute and 46-second coming-of-age, high-energy song that gelled with teenagers at the time who were just beginning to earn their own money and buy their own records.

Some of those teenagers, now 30-somethings, might chuckle at the ‘cheesiness’ of “The Middle” today. But back then, it appealed to its core audience, perfectly primed and ready for a new era of emotional rock music. “The Middle” put Jimmy Eat World on the map, helping its new fans navigate life’s bumpy adolescent years with lyrics like “Live right now, just be yourself/ It doesn't matter if it's good enough for someone else.” And two decades later, it still offers nostalgic therapy.

The making of Bleed American didn’t come easy, namely because of lack of funds. They had just lost their label but had songs and material left over from the Clarity sessions. They toiled over the album with odd jobs and a European tour, selling CDs of their singles and some demos at the time. 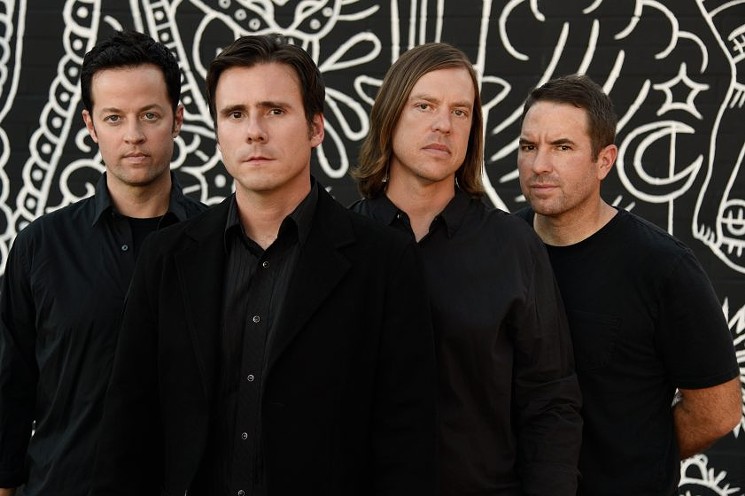 Jimmy Eat World’s success with Bleed American  boosted the revolution of emo pop.
Courtesy of Jimmy Eat World
Eventually, they reunited with multi-platinum record producer and drummer for Drive Like Jehu Mark Trombino, who also helmed Clarity and its predecessor Static Prevails. Trombino can be largely thanked for Bleed American ever making it to CD shelves as he saw such potential in the album’s success that he waived all fees until the band could pay him back. They certainly did when they signed with DreamWorks immediately after recording the 11-track album. (The deluxe edition included several other songs, including the incredible track “No Sensitivity” that could have held its own as a hit single, or the angelic ballad “The Most Beautiful Things”).

Bleed American was released in July 2001, less than two months before the terrorist attacks on Sept. 11. The band, wanting to avoid controversy, ultimately renamed the album as self-titled, and the single “Bleed American” was renamed to “Salt, Sweat, Sugar,” derived from a lyric in the song (eventually they reverted to their original titles). It was a heavy time for a lot of young people, and many who were beginning to listen to emo or punk music at the time found comfort in the album.

It’s no secret that the Y2K era didn’t exactly crank out a ton of important music (no offense, Sugar Ray and Sum-41), but it was a novel time in alternative rock. And Bleed American was pivotal in this movement that also saw The Strokes release their first album Is This It and The White Stripes gain popularity with White Blood Cells.

Bleed American added sparkle to a genre in desperate need of renewal. Emo was niche and underground for a long time, and emo traditionalists still probably prefer it that way. But for a new, up-and-coming generation of listeners, some pop sensibilities didn’t diminish an emo band’s reputation. It just made them more likable.

Jimmy Eat World’s success with Bleed American lent several helping hands to this new revolution of emo pop and was a love letter to their own musical influences. The album’s second track, “A Praise Chorus,” has lyrics directly citing other songs from bands including They Might Be Giants, The Promise Ring and Bad Company, among others (hence the title). “Authority Song” takes its name from John Mellencamp’s song of the same name, and shouts out Jesus and Mary Chain’s album Automatic.

As fundamental as Jimmy Eat World's music was in 2001, we do have one criticism of the band's subsequent albums: They're simply not as exceptional and are a complete about-face from the ’90s emo standard Clarity. Bleed American was a one-of-a-kind album that landed on the scene at just the right time.

But for those 30-somethings like me who remember playing our new Jimmy Eat World CD back in high school and feeling the opening track thrust us face-first into our blossoming teenage years, we’re thankful for a great record that got us through some memorable times. And we can say that 20 years later, even if there’s never another one like it, that’s all right with us.
KEEP THE DALLAS OBSERVER FREE... Since we started the Dallas Observer, it has been defined as the free, independent voice of Dallas, and we'd like to keep it that way. With local media under siege, it's more important than ever for us to rally support behind funding our local journalism. You can help by participating in our "I Support" program, allowing us to keep offering readers access to our incisive coverage of local news, food and culture with no paywalls.
Make a one-time donation today for as little as $1.