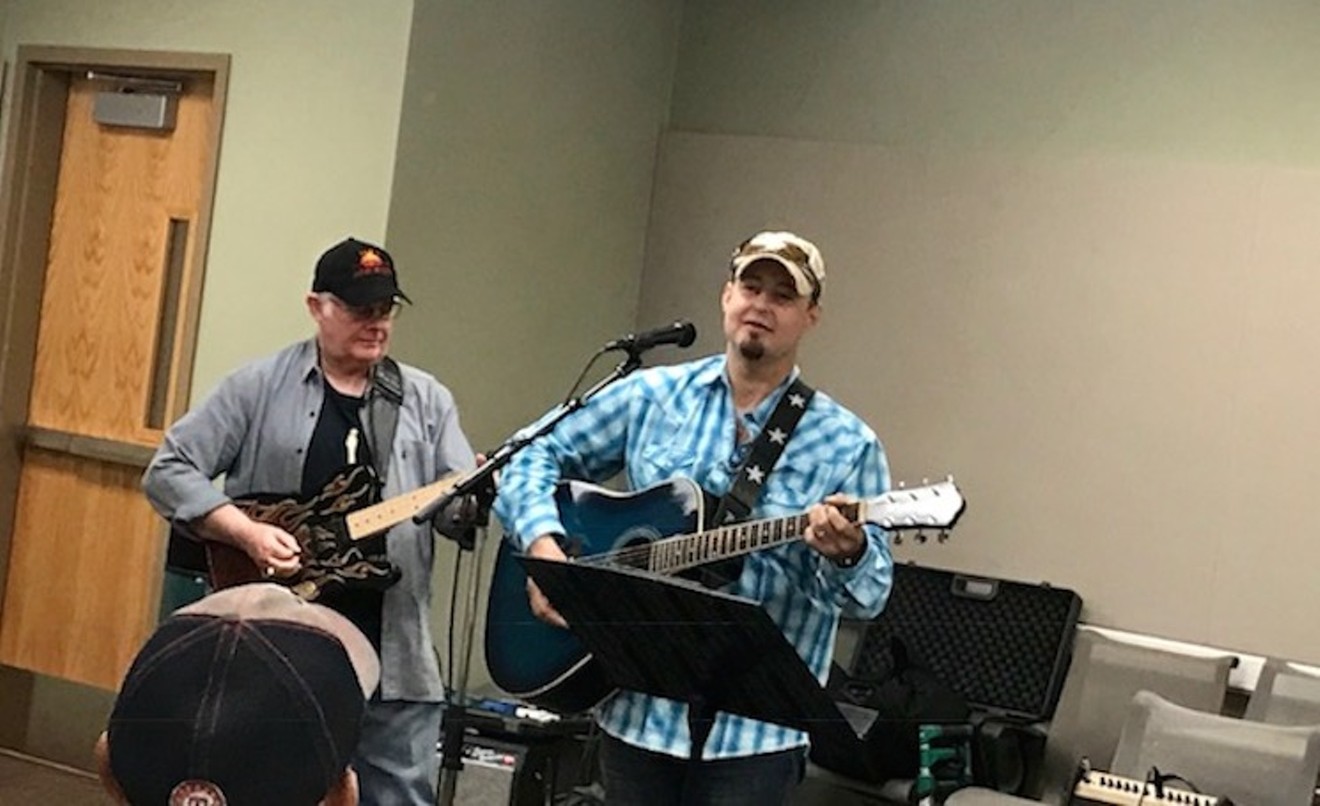 Navy Vietnam Veteran Lindell Thomas (left) performs with Taylor Bonham (right). Bonham wrote "Same Star," an award-winning song, in the Guitars for Heroes program. Karen Gavis
About a dozen U.S. veterans who served in Korea, Vietnam and the Middle East are gathered for band practice at the Veterans Administration building in Fort Worth. The Guitars for Heroes program is helping them cope with their trauma and injuries through music.

Some sing Merle Haggard tunes, strumming acoustic guitars provided to them through the 12-week program. Recreational therapist Donna Gerron started the program in 2012. She says she's “not a music person,” but she found its therapeutic benefits while seeking something that could help the hand-eye coordination of veterans with head injuries.

Five of the program’s participants make up the Guitars for Heroes band, which plays local gigs at places like Tarrant County College. Gerron says the college has seen an influx of veterans. The band’s manager, Ron Burns, was taking classes at TCC for post-traumatic stress disorder when he learned about Guitars for Heroes. Burns, an Air Force veteran, says he was part of the 1996 Khobar Towers bombing in Saudi Arabia and now has a device that goes off every three minutes to help him keep talking. His hands still tremble.

“Things seemed like they were going to be OK,” he says. “Then I began having headaches and a stroke and had to medically retire.”

After being home by himself for a while, Burns says, things began to close in on him. Gerron encouraged him to join Guitars for Heroes. He plays an Epiphone Hummingbird guitar, a Christmas gift from his wife, and sings.

Burns says the band plays classic rock, blues and some classic country. He estimates more than 500 veterans have gone through the Guitars for Heroes program.

“When you’re able to play music, it helps to relieve stress that you may be experiencing, says Keith Burrowes, a Vietnam veteran sporting a Texas Rangers ball cap. “It gives you a sense of fulfillment hoping to accomplish something. Since I was a child, I always wanted to be able play the guitar but was never afforded the opportunity.”

Army veteran Taylor Bonham says he was at the VA building one day when he noticed a guitar leaning against a wall in the hallway. Gerron told him about her program.

Bonham, who has played the guitar since he was 8 years old, joined the group and wrote an award-winning country song. “Same Star” took first place at the National Veterans Creative Arts Festival.

Bonham plays a blue Ibanez that he found at a pawn shop while looking for guitars for other members of the group, something he does when he makes extra cash.

“[Guitars for Heroes] has been a good therapy to kind of relocate your mind to another area,” Korea and Vietnam veteran James Benson says. “I think I would’ve probably went to the Tallahassee bridge and took me a long leap.”

As members of the group joke about being jealous of Benson's Martin guitar, he explains how joining the program has given him a broader appreciation for music.

“You know, a C is a C in county and western, a C is a C in jazz,” he says. “That makes me want to learn all of it now. At one time, I thought I had a special flavor for music. I thought it was just soul music, but that’s not true."

Guitars for Heroes has a waiting list. More than anything, its members report that the fellowship draws them to the program.