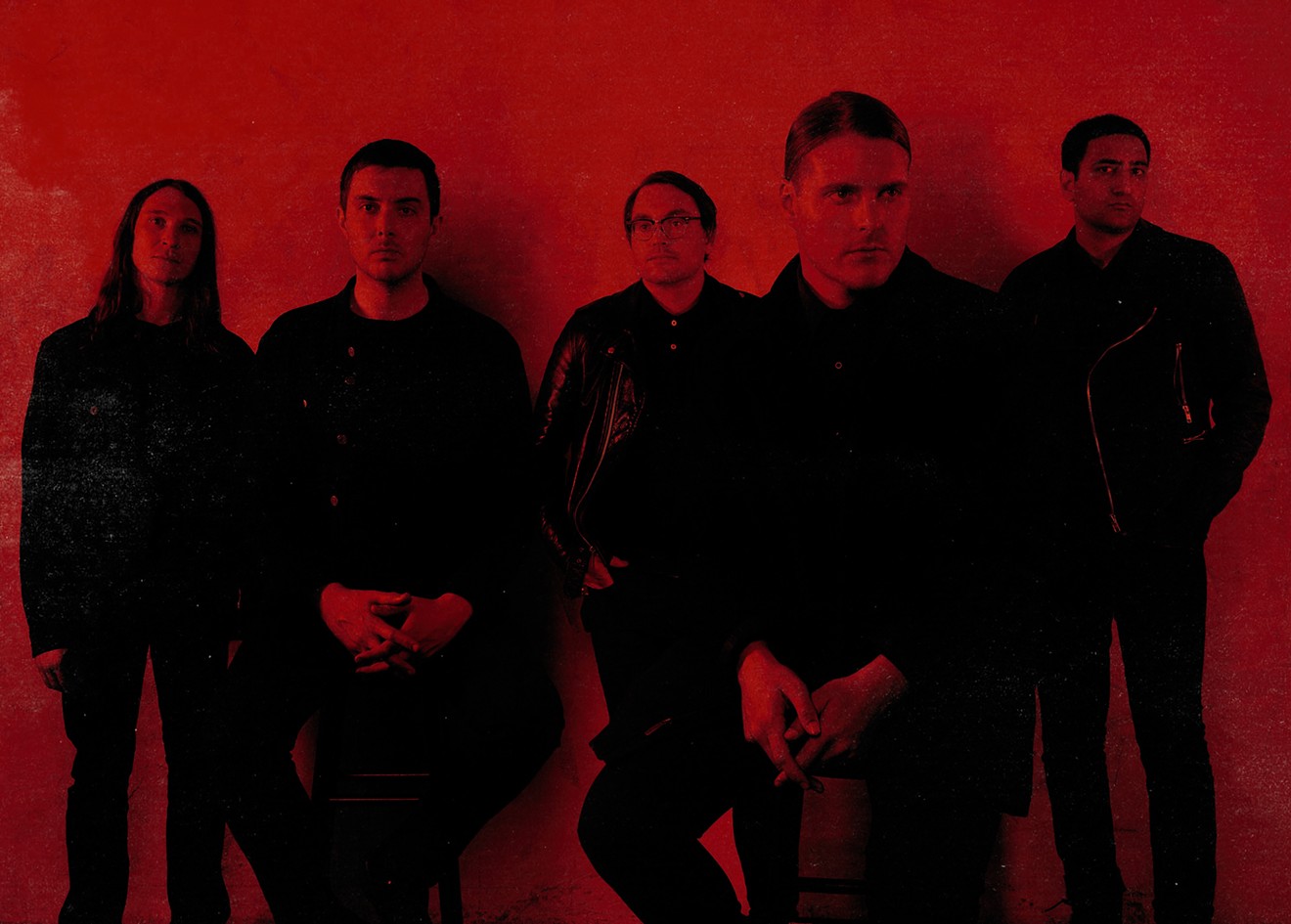 See Deafheaven play Friday at Gas Monkey Bar N’ Grill. courtesy Deafheaven
It is a busy Tuesday morning in California for Deafheaven vocalist George Clarke, who is getting ready to set off on a U.S. tour that will support his band’s fourth studio album, Ordinary Corrupt Human Love. Clarke has one day left before his first tour stop in Phoenix. He’s driving and getting things ready for the next two months he’ll spend traveling across the country.

“I am running around hectic,” Clarke says over the phone. “We leave today, so I’m getting all the last things done. This day is always all over the place, but I’m excited.”

As the frontman of a band that sounds at times heavy and at times tender, Clarke possesses a calm demeanor that separates him from his onstage persona, which can be described as a manic music composer directing his audience with snarling growls. These two personalities have been evident in Deafheaven’s previous releases, but in the group's latest album, this trait seems to have intensified and matured, along with its stylistic, genre-varying sound.

"I think also that [Deafheaven guitarist] Shiv [Mehra]’s influences came out a bit more on this record. There’s some guitar playing that’s really influenced by psychedelia and somewhat of a classic rock influence, like a [Led] Zeppelin influence. That was kind of the feel. It was half this sort of Britpop thing shining through and half a little bit of psychedelia.”

Deafheaven formed in 2010 and helped develop the blackgaze genre after releasing its 2013 sophomore album, Sunbather, which meshed wall-of-sound shoegaze melodies with the fast-paced anger and distortion of black metal. The result is like a sonic wildlife space where Clarke’s romanticist lyricism roams and lingers.

Clarke continued to expand his lyrical style with the songs in Ordinary Corrupt Human Love. He says that this time, he focused more on the everyday things in life and captured a positive view of people and their struggles.

“The idea behind the record is one of which is centered on empathy and this general understanding for people,” Clarke continues. “The other was to bring attention to the more mundane aspects of life and just kind of celebrate people for existing — just for getting through it. It’s kind of trying to convey this message that all of us are in this same struggle together.

"I think it’s important to have that kind of empathy and understanding for other people. That was the idea. Lyrically, there are a lot of motifs that we play with a lot. There’s a lot of flowery imagery; there’s a lot of bird imagery, but the overall mood is predominantly positive.”

The album title might suggest a negative perspective on the human condition. Clarke, however, says the name, which was inspired by Graham Greene’s The End of the Affair, means the opposite for him.

“The book has nothing to do with the record except for the fact that I was really struggling with the title,” Clarke says. “I think I had, honest to God, maybe like three options I had written down in my notebook, and I kept taking lyrical examples or just playing with words. Anyway, I was kind of frustrated by the whole thing, and we were reaching the point where I literally needed to come up with something. I was reading that book around that time and came across that phrase.

"To me, it really exemplifies what it was we were trying to talk about, as far as just kind of celebrating the mundane aspects of humanity and how it doesn’t need to be grandiose. Just being who you are is good enough, and that love itself is a strange, conflicting, bittersweet thing. To me, it felt very proper. I shared it with a couple of the guys, and they liked it, too. So we approved.”

Adding to the mundaneness, the album cover depicts a blurry black-and-white photograph of a woman near the Civic Center in San Francisco. The photo was taken by photographer Sean Stout, who, along with Clarke, shot stills of San Francisco bay area life in Super 8mm film earlier this year. Stout also used some of the shots to make the video for “Honeycomb,” one of the album’s singles.

“Along with the writing and recording of the album, we had Sean essentially living with us while we were working on the record,” Clarke says. “I’m a fan of Sean’s photography, and so the idea was, after practices or after days in the studio, we would go around to different parts of the city and really try to capture people in their natural moment. Kind of build on that idea of beauty in the mundane, I guess. All of the photography is based on that.

The process of making Ordinary Corrupt Human Love was “the best recording experience we’ve had,” Clarke says. The group again worked with producer Jack Shirley, as well as with Touché Amoré’s Nick Steinhardt as art director. Clarke describes the studio sessions as less stressful than relaxed, with friends stopping by to hang out occasionally. One friend who visited and ended up appearing on the new album is fellow Sargent-House-managed artist Chelsea Wolfe.

Wolfe contributes vocals on the track “Night People,” which sees her joining Clarke on a piano-driven, atmospheric ballad. Both had discussed collaborating after years of friendship, but until now, conflicting schedules seemed to get in the way of making it happen.

“We’ve been friends with Chelsea, as well as Ben Chisom, who helped write the track with [Deafheaven's] Kerry [McCoy], for a lot of years,” Clarke says. “We’ve been friends for essentially a decade. We’ve talked about doing this for a really long time. As you know, she’s a very busy artist, and we also tend to get very busy. So it took a few years to iron out, but we both had some time and just made it happen. It was really easy — very casual the way that track came about.”

The decision to include cleaner vocals in the track comes from an effort to continually experiment with sounds, a testament to the type of band Deafheaven is. It has always been adamant in exploring different ways to modify its sound, even after getting mixed reactions from the metal community for merging black metal and shoegaze together.

“We’ve been a band for eight years, and this is our fourth album, and we wanted to expand our sound in little ways,” Clarke says. “I think we do with every record. This time, we decided to experiment more vocally, and we wanted to have some variation without being over the top. I think that the clean vocals are used in a tasteful way, and it just adds another layer. The more albums you write, it can sometimes be hard to keep yourself interested, and the easiest way to do that is using different dynamics.”

The new Deafheaven album is set to be released Friday, which coincides with the second stop of the tour: Dallas. Clarke, who’s performing in Dallas, Austin and Houston consecutively, says Texas has been gracious to the band in the past. He expects nothing different this time around.

“Yeah, it’s just going to be a fun night,” he says. “I think that the mood and energy — because the record is going to be out — is going to be present, and I think we’re going to have a really good show. I’m really excited. All of Texas is always a treat for us. Getting to start the tour there is going to be a blast. Very much looking forward to the show.”

Deafheaven performs Friday at Gas Monkey Bar N’ Grill.
KEEP THE DALLAS OBSERVER FREE... Since we started the Dallas Observer, it has been defined as the free, independent voice of Dallas, and we'd like to keep it that way. With local media under siege, it's more important than ever for us to rally support behind funding our local journalism. You can help by participating in our "I Support" program, allowing us to keep offering readers access to our incisive coverage of local news, food and culture with no paywalls.
Make a one-time donation today for as little as $1.