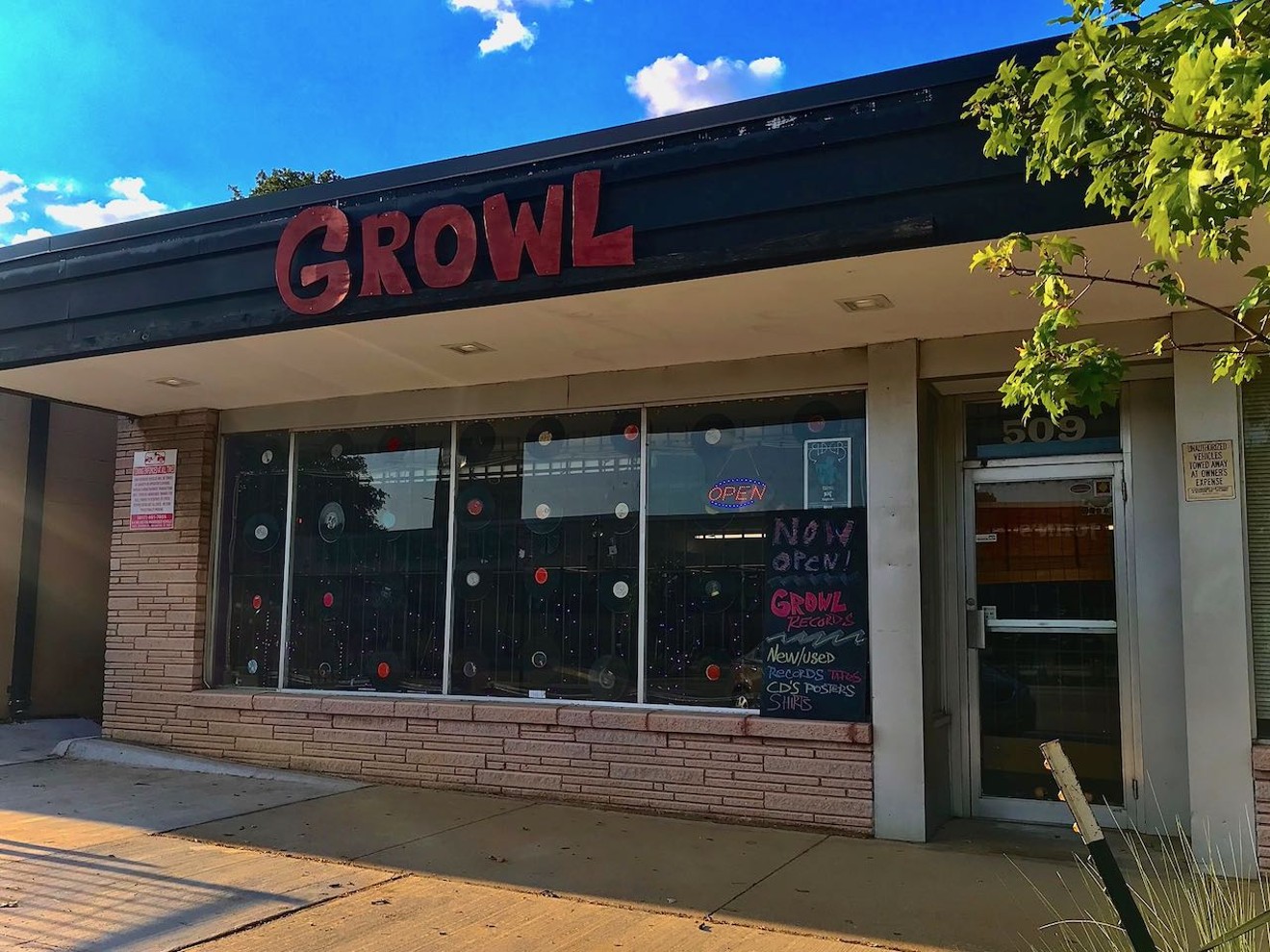 Growl in Arlington Natalie Ellis
A new and used record store, Growl, is blossoming in downtown Arlington along Abrams Street. This retail space has cycled through different phases over the last few years, trying to figure out what it wants to really be when it grows up. With low ceilings, a cement floor, bars on the windows, and a hint of patchouli in the air, it certainly gives off an old soul-rocker vibe.

A few years ago when Division Brewing moved into the building behind it, it was a vintage tchotchke shop. The store eventually packed up and left, so the owner of Division Brewing, Wade Wadlington, snagged the space. Since the store and brewery shared a common courtyard, it made sense to envelop the space.

For a while, they sold comic books and collectibles. However, when the brewery started hosting live music in the courtyard, rain, cold winters and hot summer days demanded a climate-controlled area for the bands. So it started to serve as more of a music venue. 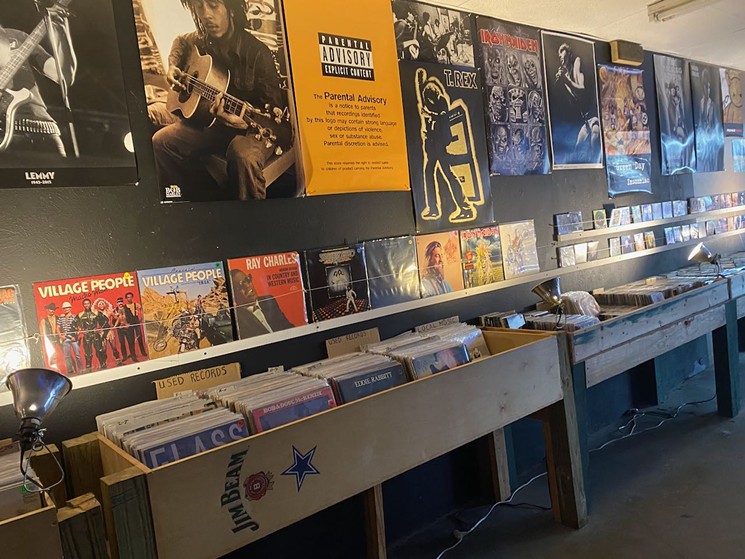 A Move to Music
When Wadlington installed album racks along the walls, customers could sip a beer from the brewery, peruse albums all while listening to bands like The Prof. Fuzz 63, Bruce Magnus or Brave Little Howl.

When the pandemic hit in March of 2020, it was once again an empty shell.

That’s when Natalie Ellis, a close friend of Division Brewing, got restless. A job she was supposed to start with Dallas County was put on hold and with spare time on her hands, she had the idea of breathing new life into the vinyl collection. She even had an inside connection.

“We just got lucky because we’ve got some good friends who were DJs in Dallas and had very good taste in music who are helping us create this place,” Ellis says. 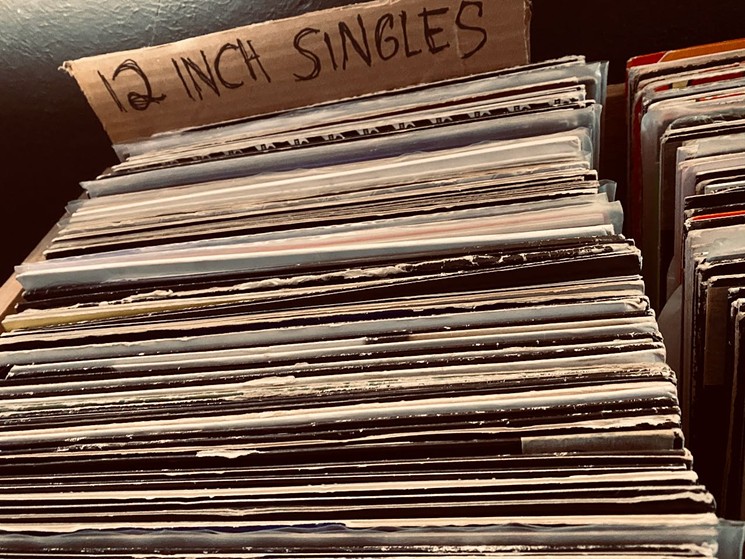 Stuck on Mute
Sal Gato has been a staple in the Dallas DJ scene since the ’80s. He’s amassed more than 10,000 vinyl records over the years, heavy on jazz and old school funk, after playing in clubs in Deep Ellum throughout the '90s.

Since the pandemic hit, Gato’s records have been stuck on mute. So, he and other local DJs, including Joe Walker, began parsing through their stacks, selling some to Ellis to make a little money.

Now Ellis and her son, Gio, a virtual learning student for the time being, manage the inventory and cover shifts at the record store.

“We are trying to recapture an old school record store feel,” Ellis says. “No bells or whistles, just music. We want people to feel comfortable here and have fun when they walk in the door. If you see a record you like, then grab it and we’ll play it for you and you can hang out here for a bit. Plus, you can grab a beer at the brewery.”

Ellis continues adding to the collection by purchasing more albums from DJs every two weeks. The general theme is an eclectic mix of anything '60s, '70s and ’80s.

“Some friends of mine did sell us a bunch of 12-inch singles though that would be great for an up-and-coming DJ,” Ellis says. 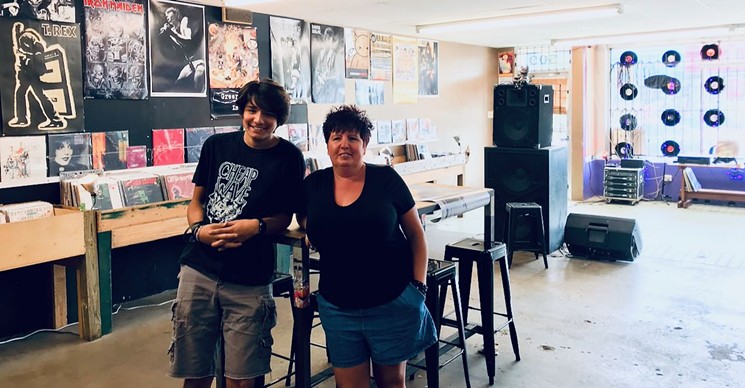 A Collective Vibe
Eventually, they’d like to have live music again.  “Our plan is to allow bands to have in-store promotion shows, small scale, just one band at a time,” Wadlington says. “Focus more on being a record store, less music venue, but allowing shows to take place.”

The small business owners who abut the courtyard there have evolved into a little cultural hub. Hershey’s Palace is on one side, serving some of the best fried catfish you’ll find anywhere. 225 BBQ has its trailer nearby, with a Mexican-inspired barbecue menu that includes cheesy tacos and elotes, all laden with smokey succulent brisket.

Then, the brewery itself is a collection of dedicated craft-beer enthusiasts. They've always leaned heavily on sour beers but have a wide variety including the just-released Hula Hopper, West Coast IPA, 6.0% ABV, 70 IBU made with Citra hops.

Growl adds a beat to the mix. They’re now working on adding skateboards and custom decks to the space.

This past Saturday they hosted a listening party for Paper Saints, a Dallas post-punk, new wave band. Follow their Facebook page for other events.

Beer, good food, music while thumbing through vinyl; not a bad way to spin some time.