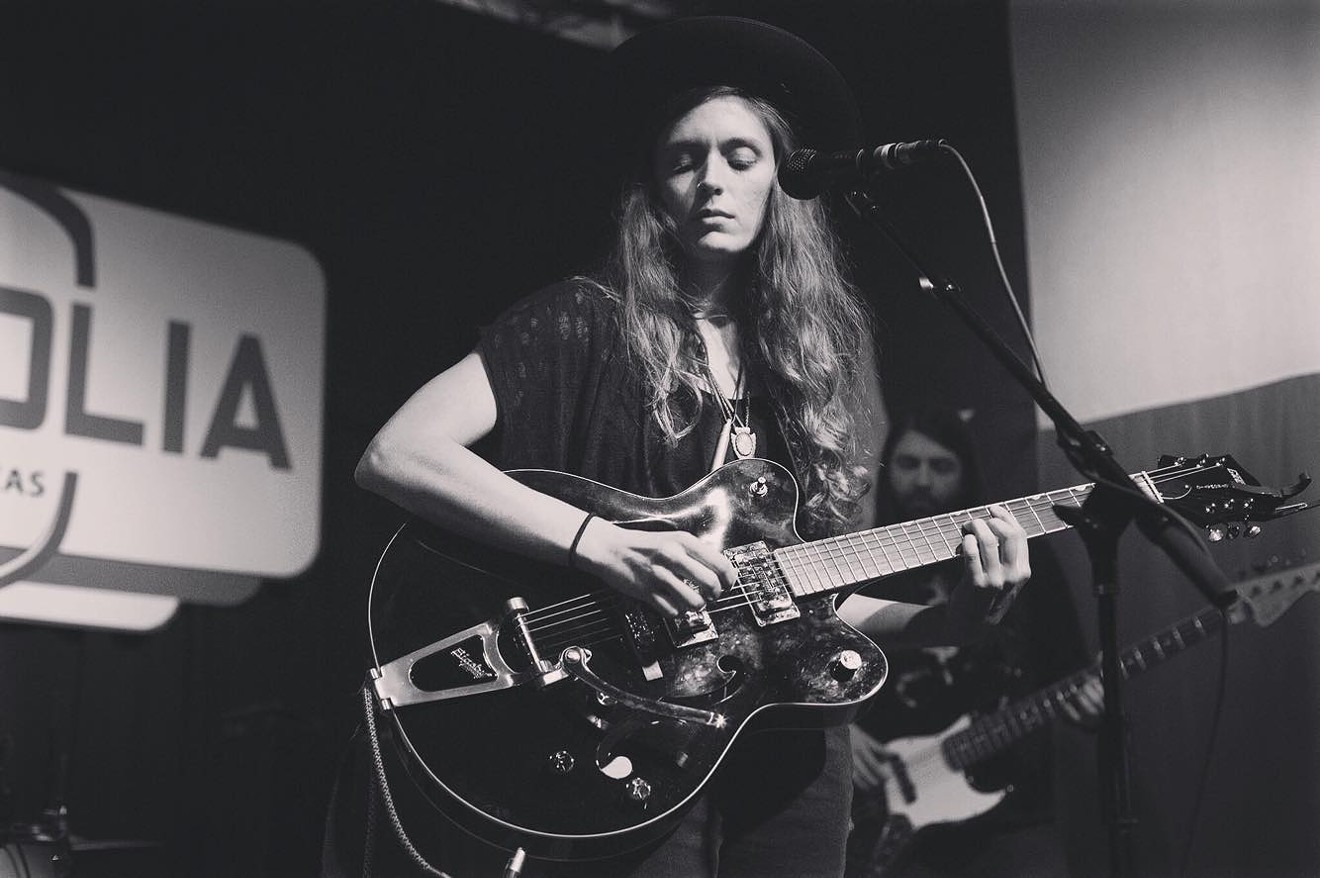 Jenna Clark is not slowing down. Leah Jones

Like with so many artists these days, it’s hard to know what to call Jenna Clark’s music. In her most recent EP, Ten O’Clock in the Morning, guitar riffs as sharp as razors flow in the deep space created by solid bass lines and keyboard playing on top of swinging drum rolls. Clark’s voice glides over it all.

While plenty of musicians from varying genres have influenced her sound, Clark says she thinks labeling music is silly.

“I write what comes through,” Clark says. “I have taken all of my knowledge of songwriting and just tried to let it flow the best that I can.”

When she works on material, she doesn’t set out to make a rock song or a jazz tune. To her, she’s just creating music. So it’s funny to her when journalists (like this one) call her a jazz artist or when music blogs nominate her for jazz music awards — which she has even won in the past. In fact, the name of her latest EP (and the name of one of her past bands) is a direct reference to the fact that she is not a jazz musician.

Clark says the music scene in her home state of Florida was primarily populated by emo and hardcore bands when she was growing up.

“There were a lot of different sounds around me growing up, and it just kind of cultivated the direction of my music,” she says.

And her music has constantly been changing since she started creating it.

Clark came to Dallas with 10 years of guitar lessons under her belt, but she hadn’t gotten serious about her life as a musician yet. When she landed in Texas in 2012, she says she was fortunate to have family in her new home. One of the first things on Clark’s agenda was to become a certified yoga instructor. One 200-hour course later, and she crossed this off her list.

Clark then began testing her musical chops under the lights of local venues. She would sweat in yoga classes by day and perform in Dallas by night.

She started off hitting up places such as The Free Man Cajun Café and Lounge for its open mic nights. Eventually, she says, she’d work up the courage to jump in on one of the venue’s Sunday jam sessions.

“It was pretty intimidating, the blues jams,” she recalls. “But, I had written a couple of 12-bar-blues tunes to take, so it went OK.”

Before she knew it, Clark was jumping in on jams across town at venues such as O’Riley’s Bar, The Balcony Club and The Cottage. She also had a short stint as an open mic host at the now-shuttered Drugstore Cowboy in Deep Ellum.

These nights, as well as teaming up with 13th Floor Music’s Ken Welker for booking, allowed Clark to get tapped into the inner workings of DFW’s music scene.

In the midst of trying to get a band together, Clark met Dan Creamer of Dallas’ The Texas Gentlemen. Although she didn’t have any recording experience, Creamer wanted to help Clark produce her first self-titled release.


“It is difficult sometimes — just remembering your intention in the midst of all of it. You get caught up playing gig after gig after gig." — Jenna Clark

Clark and Creamer joined Jason Burt of Medicine Man Revival and spent three days cooped up in Modern Electric Recording Studios, churning out tracks like “Sometimes,” Graceless,” “No Place to Go” and others.

By the time the album was released, Clark was teaching 10-12 yoga classes a week and slamming out five shows on top of that. Juggling all of it was challenging for her and is something she still struggles with.

“A life in music is not an easy choice for anyone,” she says. “It’s definitely had its ups and downs. I’m in a place now where I’m taking a step back and separating the art from the entertainment.

“It is difficult sometimes — just remembering your intention in the midst of all of it. You get caught up playing gig after gig after gig. Sometimes you’re so busy that you don’t have time to sit down and really think about writing songs.”

Two staples of Clark’s music today are keyboard player Jacob Greenan and guitarist Conner Ferrell, who are both heavily featured on Ten O’Clock in the Morning. Greenan is helping Clark record her next EP at Shiny Sounds Recording Studio.

Greenan says ever since he's known her, Clark has pulled from genres such as blues, rock, jazz, soul and country.

"The places that she is pulling music from make it really appealing for a musician like me," Greenan says. "It just makes for really fun music to play and songs that really hit you hard."

The EP Clark is working on leans a lot more into country. However, Greenan says one of the bigger changes in Clark's music is in her songwriting. He says the songs have become more intimate and introspective.

"Scenes and things and people change. So do I, and so does the music," Clark says.

"Create your own art. While everyone is thinking about it, make more," Clark says, referencing an Andy Warhol quote. And that's what she plans to do.
KEEP THE DALLAS OBSERVER FREE... Since we started the Dallas Observer, it has been defined as the free, independent voice of Dallas, and we'd like to keep it that way. With local media under siege, it's more important than ever for us to rally support behind funding our local journalism. You can help by participating in our "I Support" program, allowing us to keep offering readers access to our incisive coverage of local news, food and culture with no paywalls.
Make a one-time donation today for as little as $1.