John and June open for Tripping Daisy at the Kessler Theater Mike Brooks
This is a happy story, with a happy ending.

Let’s back up a bit. Our protagonists are John Dufilho and his daughter June, who just turned 12. He is one of the busiest men in the music business. As COVID measures receded and life started to return to normal, we started running into him again. First, his band Motorcade opened for the Toadies in August. Then, his band Clifffs played an Alice Cooper tribute night at the Kessler. And a day later, he and June opened for Tripping Daisy as a new band, John & June.

What we didn’t know is that less than a year ago, John was lying in the hospital with his chest cracked open, undergoing a massive bypass surgery — twice, as a matter of fact, as the first procedure wasn’t a total success. John and June ham it up in the studio.
Mike Brooks
It started with a routine visit to the doctor. There were no problems or issues — just a regular checkup. Within seconds of listening to Dufilho's insides with her stethoscope, his doctor told him he needed to call a cardiologist. The way he remembers it, their conversation went something like this: "John, I need you to call this cardiologist." "OK, give me their card and I’ll give them a ring." "No, John, you don’t understand. You need to call this cardiologist right now."

Obviously, as this is a story with a happy ending, John is still with us. But as with any good tale, just when you think you’ve killed the monster, you'll see the claws twitch and the monster’s eyes open just a bit.

In Dufilho’s case, the monster came in the form of medical bills, for all those tests and open heart surgery that happened twice. This was not too surprising, but as a working musician, Dufilho didn’t really have medical insurance — not the kind of insurance that covers open heart surgery, twice.

There would be more monsters to slay. COVID had shut down the music industry, and now imagine that on top that you discover your heart is about to blow up, and when that gets fixed you are left staring at a heap of life-changing medical bills. Dufilho needed some help, and got it in the form of the Music Health Alliance, and specifically from Tatum Allsep.

Allsep was instrumental in guiding Dufilho to a couple of grants available for just this kind of thing. Dufilho is a great songwriter, and he must be a great grant writer, because he applied for several and got a couple. The biggest and most unusual was from Stephen King’s Haven Foundation. King’s career was almost derailed before it got started, and later he set up the foundation to help other writers and artists through financial issues. In a twist, applications must be made via hand-written requests, because that’s the way Stephen King rolls. 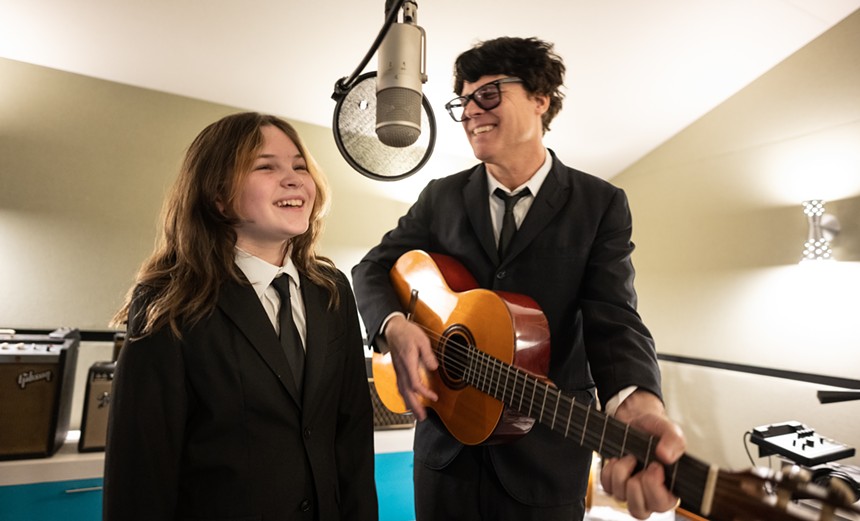 John and June get seriously sweet.
Mike Brooks
If this were a film, it would be time to insert a montage of Dufilho getting his life back in order. He could write a piece of upbeat, feel-good music, then fill it with pictures showing him fighting through rehab, hugging family and getting high-fives after each achievement.

It’s more complicated in real life. It turns out that when doctors cut you in half and then sew you back up, there are some restrictions that are placed on your recovery. Live performance was definitely out of the question, and lifting anything heavier than 5 pounds was off the table. As it happens, an electric guitar weighs more than 5 pounds.

But Dufilho got a second chance, and a small matter like not being able to lift a guitar wasn't going to slow him down. In his career, Dufilho has mastered drums, guitar, bass, producing, mixing and songwriting. One thing he hasn’t done is write, play, record, mix and produce an album's worth of music based around keys and synth. Until now, that is.

So, breaking news: Dufilho is wrapping up work on an electronic album, and here is one more back story. The last name Dufilho is a little hard to pronounce. In grade school, most kids just gave up, and for years their classmate was just John “Buffalo.” John Buffalo is now the working title of the new album, and to all those little, no-talent kids with their boring, grown-up suburban lives: Who’s laughing now? Johnny Buffalo is in the house, baby.

If you were paying attention as we started, you may remember this was a story about John and June, as in John’s daughter June. And you may be wondering why, so far, it's been all John and no June. There is a reason for that. All good feel-good stories leave you tearing up at the end, and the final scenes in this tale will be of John, the man who got a second chance in life, and June, the young woman who still has a father.

Let’s go back to the Tripping Daisy show at the Kessler. When John and June were listed as the opener, it raised a few question marks. When they took the stage, it raised a few more. It's not every day a rock show is preceded by a child performer as opener. But as we wrote at the time, John and June were great, and not at all what you might have expected. The acoustic, blood-harmonied group is now Dufilho's official third band.

Neither of the two will admit to being the instigator of this pairing. Both just remember that it came up, and both agreed it sounded like fun. They had played a couple of smaller, shorter shows before the Kessler, notably at Opening Bell and the All-Good Café. Finally, June asked if they could play a show where people weren’t eating.

Dufilho reached out to folks, including the Kessler's artistic director Jeff Liles, but didn’t expect much. Two weeks later he got a call asking if they wanted to open for Tripping Daisy.

What impressed us that night was their easy camaraderie. They just seemed comfortable onstage. When they first talked about playing together, Dufilho asked June if she knew any of the songs he'd been working on at home. It turns out she did, almost all of them. During long afternoon hours in the studio, June would work on her homework or projects while her dad sat at the board mixing. As Dufilho went back and forth tweaking things, June was quietly absorbing.

When we meet again in the studio for a photo shoot, they slip right back into character: 1, 2, 3 and the songs just pour out.

June doesn’t have big plans to learn drum, bass, guitar, mixing, recording and producing like her dad, but she is excited about joining the school choir (when she gets out of middle school). In the meantime, she's looking forward to taking part in a musical theater production at school.

Dufilho's parents came to watch the Kessler show, and it wasn’t a surprise to see how emotional the show made them. There is nothing you could want more at that age than to see your children and grandchildren happy, healthy and successful. We didn’t realize at the time what had gone on in the previous eight months that led to that point. It’s a good story, a feel-good story that had to be shared. John and June. It's good to be alive.
Mike Brooks
KEEP THE DALLAS OBSERVER FREE... Since we started the Dallas Observer, it has been defined as the free, independent voice of Dallas, and we'd like to keep it that way. With local media under siege, it's more important than ever for us to rally support behind funding our local journalism. You can help by participating in our "I Support" program, allowing us to keep offering readers access to our incisive coverage of local news, food and culture with no paywalls.
Make a one-time donation today for as little as $1.
Mike Brooks