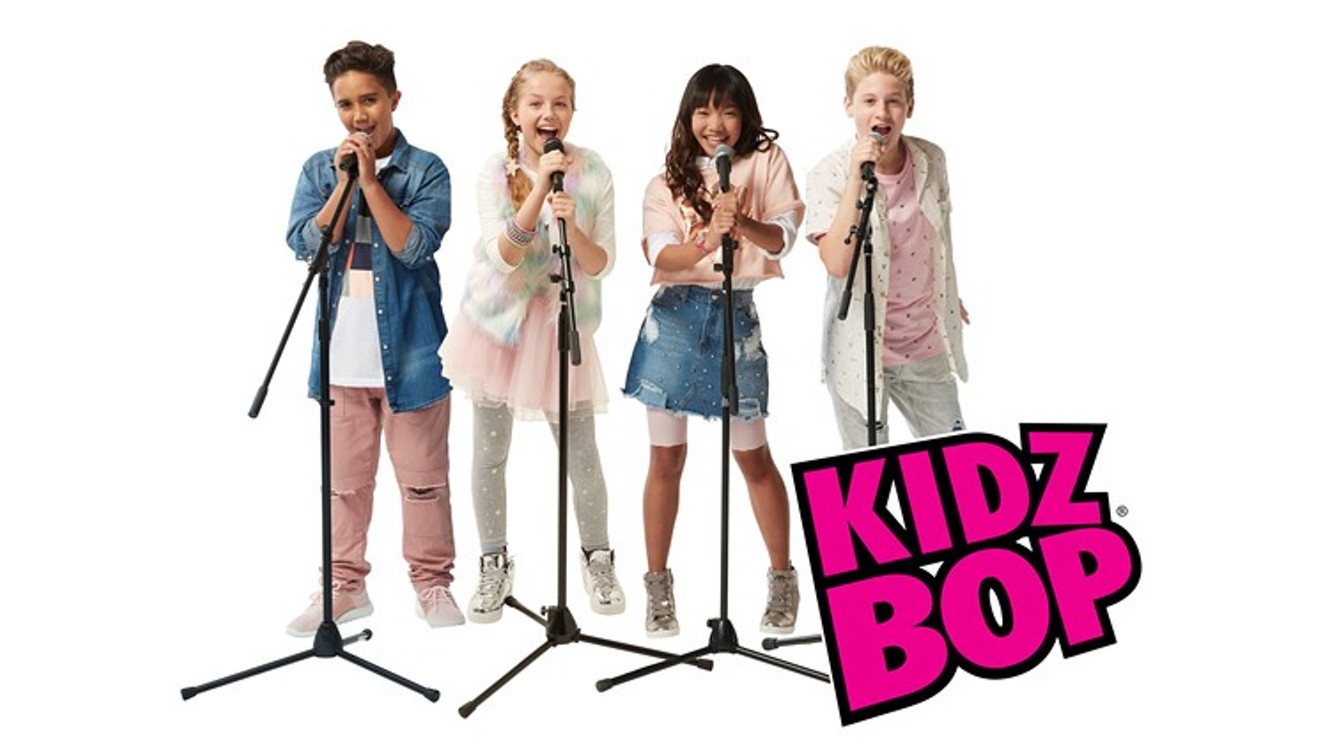 Don't you love them? Ticketmaster


Proving that the pain of having kids doesn’t end at childbirth, The Kidz Bop Tour will stop at The Pavilion at Toyota Music Factory on Sept. 22. The live tour will feature a group of young performers hoping to be the next Britney Spears or Justin Bieber, singing songs from the brand’s newest album, Kidz Bop 2018.

For those of you with stain-free furniture, Kidz Bop is a series of albums showcasing the most current of pop songs with scrubbed-clean lyrics and performed by pre-teens. The Kidz Bop brand allows younger ears to listen to songs with more mature themes. For example, on the new album, they feature the song “Stay,” with lyrics that include, “I don’t want to spend the night alone.” In the Kidz Bop version, they change the lyrics to say, “I don’t want to spend the day alone.” See? No one can have sex during the day — problem solved.

In preparation for the upcoming live show, we look back on some of the more noticeable song selections that have happened throughout the more than 38 albums previously recorded. After numerous gray hairs and a ruined Spotify algorithm later, here are a few we found.


"Love Me Like You Do" by Ellie Goulding
A song titled “Love Me Like You Do” has some built-in red flags when trying to make it kid-friendly. If you’re still not big enough to ride all the roller coasters, but being loved in any routine way, there needs to be a visit from the authorities to the teacher’s lounge. What’s more interesting with this song is not what was taken out, but what was left in. "Yeah, I'll let you set the pace / 'Cause I'm not thinking straight / My head spinning around I can't see clear no more."

Unless this song is about a race, and it’s not, setting a pace is something most guys won’t learn about until… never, really.


"Bad At Love" by Halsey
There’s a lot to unwrap on this one. Kidz Bop is obviously going to remove the references to drugs and alcohol, because no child needs to know about cocaine until they’re at least 15 (14 for Highland Park), and it’s not surprising they tag in a male singer for any of the same-sex relationship lyrics, or that they remove the line about one of her exes calling her a bitch. What’s really most surprising about this song is Kidz Bop did it at all. “Hey look, these kids don’t need to know about drugs and booze, but they can relate to a series of failed relationships that they reflect on when they’re lonely.”


"Oops I Did It Again" by Britney Spears
This is the one that started it all. When the first Kidz Bop album came out in 2001, “Oops I Did it Again” was a prominently featured song. One of the most ultimate jailbait songs was covered by children, turning it into an internet mating call for perverts, and promptly launched a multi-million-dollar franchise. Turn the song on to hear someone sing bafflingly worse than Spears, turn it off to shower but never feel clean when you hear the children’s chorus sing, “I’m not that innocent.”


"Girls & Boys" by Good Charlotte
This song is a great argument for the words you use don’t matter, it’s the intent. No lines were changed or omitted for this Kidz Bop cover. Not a foul word used, so by that standard this song will be completely appropriate for children. That’s what makes it so perfect. “Vacations and shopping sprees / These are a few of her favorite things / She'll get what she wants if she's willing to please / His type of girl always comes with a fee / Hey now, there's nothing for free.”

You’re not supposed to get that kind of life lesson from a children’s compilation album. You’re supposed to get it when you go to your dad’s house for weekend visitation, and he slurs it at you while he wipes at his eyes.


"Hey Ya" by Outkast (Really Andre 3000 but whatever)
There is no bad version of this song. If an 80-year-old woman gets onstage to sing this at karaoke, you’re about to witness her life peak. Play this song at every funeral. Play it at the DMV. It will never be bad. These kids singing it can’t ruin it. They tried. Almost succeeded, but then the song pulled a Rocky-level comeback when what sounds to be a 10-year-old boy sings, “Don’t want to meet your daddy / Just want you in my Caddy.” A man about to jump off a building will step back from the ledge if he hears those lines. It’s that joy-filling.

Also this song is about the intangibility of love, can it ever last and did it ever really exist, but eh. It’s damn catchy.


"Burnin’ Up" by The Jonas Brothers
This song wins for the category of most redundant selection. It was the Jonas Brothers — there wasn’t really anything to clean up. The guys were still wearing virgin power rings when this song was released (Kevin didn’t need to — it was implied). It’s like replacing a bowl of vanilla ice cream with a bowl of Styrofoam. Maybe there is some dirty lyric that Kidz Bop cleaned up, but it’s impossible to know. You can’t make it 30 seconds into either song without passing out from boredom and smashing your head into the keyboard.
KEEP THE DALLAS OBSERVER FREE... Since we started the Dallas Observer, it has been defined as the free, independent voice of Dallas, and we'd like to keep it that way. With local media under siege, it's more important than ever for us to rally support behind funding our local journalism. You can help by participating in our "I Support" program, allowing us to keep offering readers access to our incisive coverage of local news, food and culture with no paywalls.
Make a one-time donation today for as little as $1.