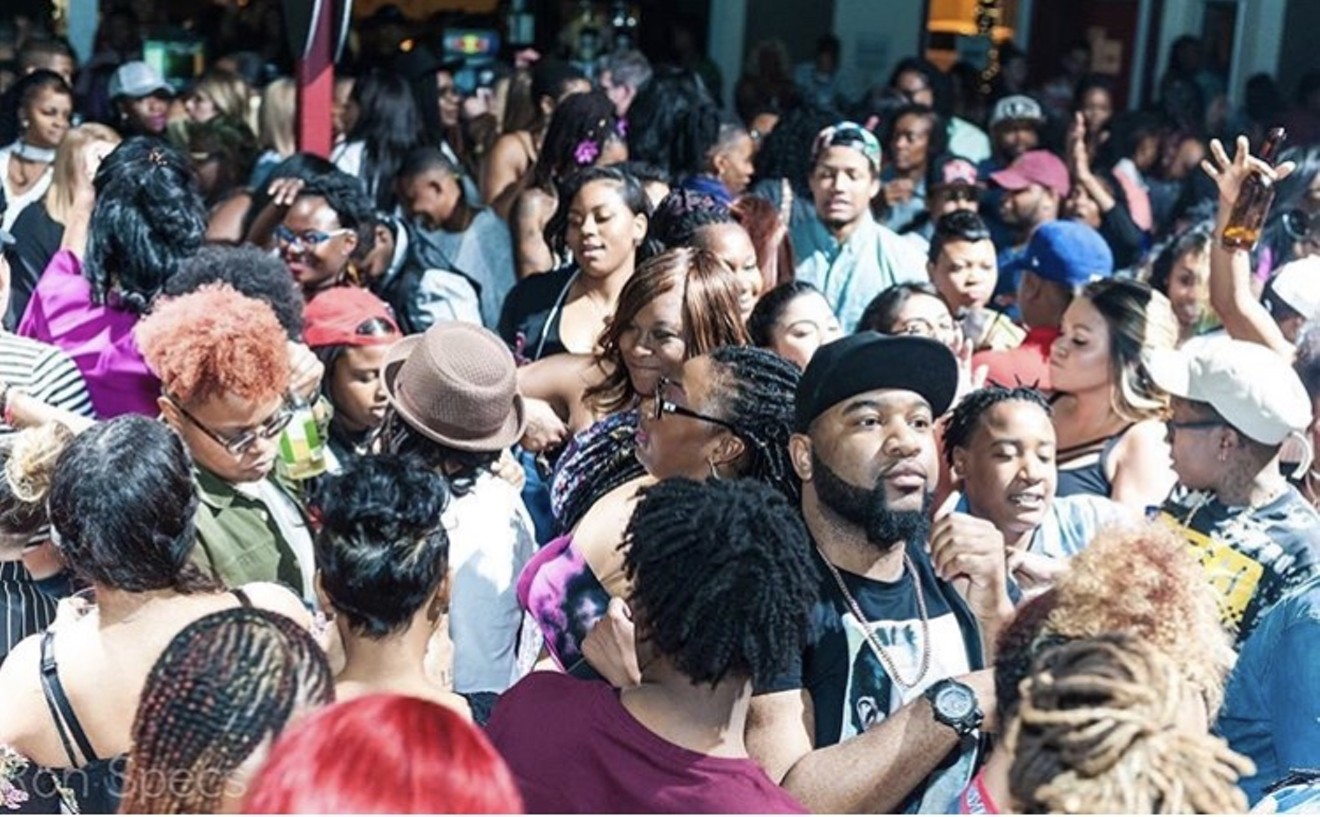 This year's Suesapalooza promises to be even bigger than ever. Ron Specs
This Sunday, Sue Ellen’s on Cedar Springs will host its 20th annual Suesapalooza Festival. Every year, Sue Ellen’s hosts a variety of musicians and vendors for a queer-friendly music festival held in the parking lot of the famous lesbian bar. Over the years, Suesapalooza has become a household name in Dallas’ LGBTQ+ community, as the festival offers fun activities for people of all ages. It is perhaps one of the most family-friendly festivals Dallas has to offer.

In its early beginnings, the annual festival was held on the front patio of Sue Ellen’s and only showcased music acts.

“It started out as what we used to call ‘Girljam,’” says Kathy Jack, founder of Suesapalooza and Sue Ellen’s manager, “and then it turned into ‘Music Fest,’ and now we call it ‘Suesapalooza’ because it encompasses not only music, but we also have games and food. It’s more of a festival now. It has grown from the small place we had, down on the end of the block on the front patio, to the inside of the club and in the outside parking lot.”

For the music portion of the festival, Jack and the Sue Ellen’s crew showcase local music acts, many of them featuring queer musicians. This year, the bash's lineup includes queer woman music duo Kathy and Bella, country singer-songwriter and guitarist Mike Randall, a blues and funkadelic band called The Mojo Dolls and the tribute band PriMadonna.

“PriMadonna is known as one of the best Madonna tributes in the DFW area,” says Jack.

Attendees of Suesapalooza will be able to play a variety of party games, including corn hole, as well as their giant beer pong, which, surprisingly, is just as much a hit with kids as it is adults.

“Suesapalooza brings in a lot of people each year, not just our regulars, but people from all over the metroplex." — Sue Ellen's owner Kathy Jack

“Anyone who has ever been to Sue Ellen’s knows that our giant beer pong is our signature game,” Jack says. “We have it out on our dance floor for everyone to play. Instead of ping pong balls, we use volleyballs, and we have big red trash cans with white tape around the top, which makes them look like big red Solo cups.”

In terms of vendors, the event will bring in a variety of merchants who are members and allies of the LGBTQ+ community. Among those showcasing product are a bow tie company called Lesbows, a gourmet hot dog vendor called Smokin’ Joe’s, and 7 Sisters Food Truck. Prism Health, a nonprofit clinic offering support to people with HIV and AIDS, will also be in attendance.

As of now, Suesapalooza has sold more presale tickets than they have before, and Jack is still determined to bring in even more of a crowd. It officially kicks off at 1 p.m. Sunday, and tickets ($5) can be purchased at Sue Ellen’s.

“Suesapalooza brings in a lot of people each year,” Jack says, “Not just our regulars, but people from all over the metroplex. To get 400 or 500 people out here on a Sunday afternoon just makes for a great day.”

With Dallas’ Pride celebrations being moved to Fair Park this year, Suesapalooza is anticipated to bring a lot of business to The Strip on Cedar Springs, where Sue Ellen’s has been open for 30 years.

“If you’ve never been before, I think everyone should come out and enjoy what we have to offer,” Jack says. “It looks like it’s going to be a great day, and I think we’re going to have a lot of fun.”
KEEP THE DALLAS OBSERVER FREE... Since we started the Dallas Observer, it has been defined as the free, independent voice of Dallas, and we'd like to keep it that way. With local media under siege, it's more important than ever for us to rally support behind funding our local journalism. You can help by participating in our "I Support" program, allowing us to keep offering readers access to our incisive coverage of local news, food and culture with no paywalls.
Make a one-time donation today for as little as $1.