Montopolis Makes Movie Scores and Soundtracks the Stars of Its Screenings 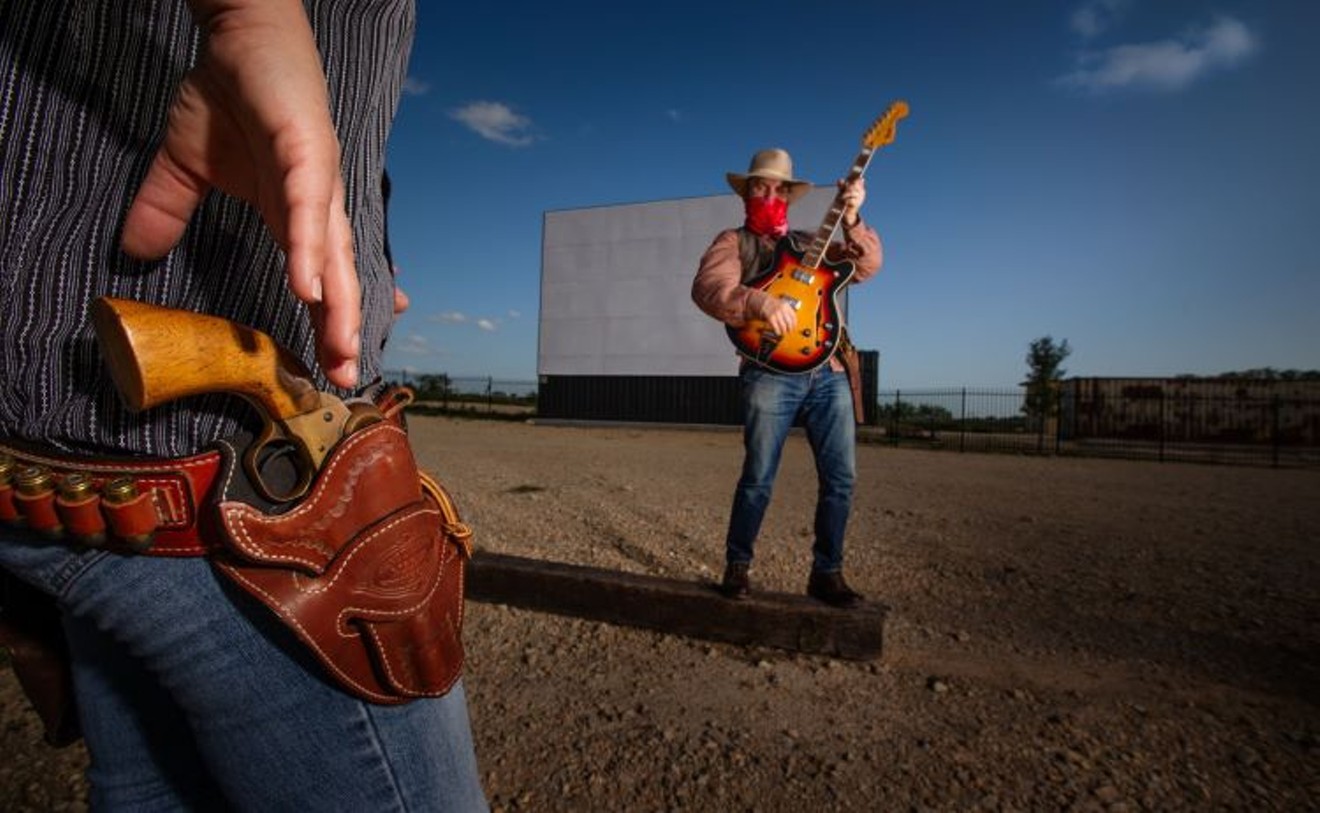 Musician Gray Parsons brought his axe to a gun fight for Montopolis, a chamber music group that performs live, original concerts of movie scores during classic movie screenings. Montopolis will perform a comedic retelling of the classic silent film western The Return of Draw Egan on Saturday as part of the Oak Cliff Film Festival. Christopher Zebo
Music can play a huge part in a movie. It can create an eerie atmosphere, heighten the tension in a tense, life-or-death moment and make an ordinary person seem like a heroic champion. When done right, of course, you won't think of the music at all.

The chamber music group Montopolis from Austin puts the spotlight on the music by performing scores live along to film, creating, for instance, majestic images of natural beauty of the Texas landscape and turning a gritty Western into a hilarious comedy.

"I like to experiment and change the narrative with the music," says Justin Sherburn, Montopolis' composer and artistic director. "When you're hired to do soundtracks for people, you're at the mercy of their artistic direction. When I get to do something on my own, I try to take it beyond the narrative."

Montopolis performs this Saturday along with Sherburn's Rocket Cinema, an outdoor movie screening service, for a comedic retelling of the 1916 silent Western drama The Return of Draw Egan during the upcoming Oak Cliff Film Festival.

Montopolis' screening of the movie comes with all new dialogue for the film's title cards written by Master Pancake's Mac Blake, which give Draw Egan a mix of the Mystery Science Theater 3000 and the Mad Movies treatment by putting funnier words in the casts' mouths, commenting on the images on the celluloid. It will screen with a live performance of movie scores from the collection of Ennio Morricone, the legendary composer of soundtracks for spaghetti Westerns such as A Fistful of Dollars and The Good, The Bad and The Ugly.

Silent film is deeply rooted in traditional sounds, and Sherburn says his goal was to break those traditions to create a subversive and "sacrilegious" comedy show.

"I think my approach to the silent film score thing is to be kind of subversive and not to try and do anything traditional," Sherburn says. "Really, you're just reinventing the movie because if you're not, then what's the point? These things have been done a million times."


Montopolis' work with movie score concerts started over a decade ago while Sherburn wrote original music for theater productions and worked as a guitar and piano playing sideman in a tango orchestra and the famed Texas rock group Okkervil River. One of his projects had him writing an original theatrical score to a stage version of director Albert Lamorisse's The Red Balloon. Sherburn enjoyed the experience so much that he formed Montopolis so he could do the same for other movies.

The film scores and concerts range from picturesque documentaries and multimedia experiences showcasing natural beauty, such as the Texas gulf in The Living Coast and a slideshow of photographer Rip Shaub's landscape portraits in Enchanted Rock.

Sherburn says the unique mix of untouched, natural landscapes and sweeping music can move audiences to cheer at documentaries.

"People just go nuts for it, especially people in rural communities," Sherburn says. "It's about Texas pride and Texas culture in a respectful way that's knowledge[able] and aware of the history, but still taking pride in all that."

Sherburn isn't just content doing one type of film or musical score. He moved into comedy with The Return of Draw Egan after seeing some of Master Pancake's live movie-mocking shows at the now-closed Alamo Drafthouse Ritz in Austin. He then recruited Blake to write new lines of onscreen dialogue for the silent film. The film screening on Saturday is the first an upcoming trilogy of Montopolis' Draw Egan movies.

"To me, it's more engaging to do something that's a little off-center," It intrigues me. It's more fun. I like to do things that are unexpected."
KEEP THE DALLAS OBSERVER FREE... Since we started the Dallas Observer, it has been defined as the free, independent voice of Dallas, and we'd like to keep it that way. With local media under siege, it's more important than ever for us to rally support behind funding our local journalism. You can help by participating in our "I Support" program, allowing us to keep offering readers access to our incisive coverage of local news, food and culture with no paywalls.
Make a one-time donation today for as little as $1.