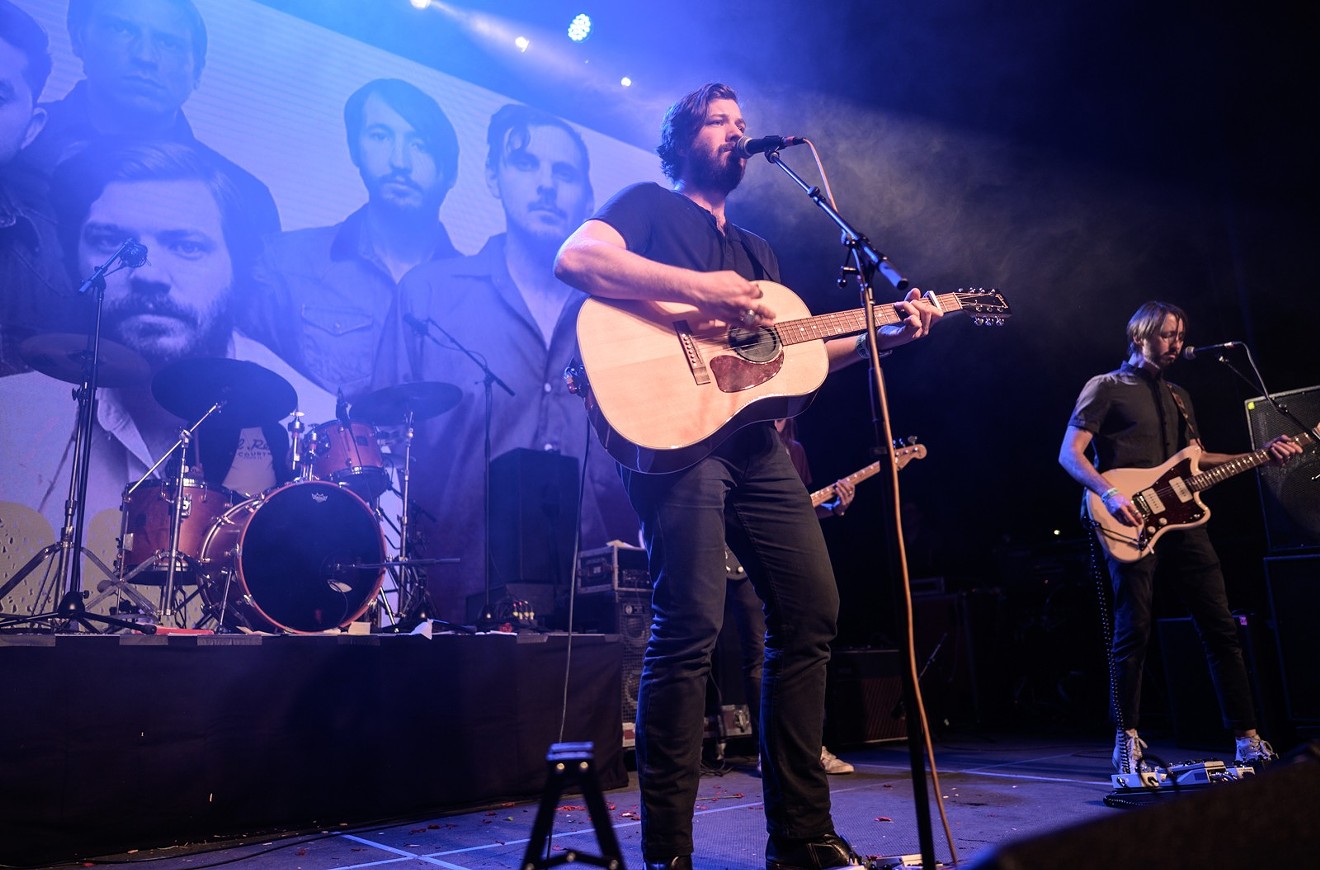 Midlake reunited for a performance at the Dallas Observer Music Awards in 2019. Now, the band is back with new music. Mike Brooks
It’s been a long seven years since we've heard anything new from Denton band Midlake. After 2013’s Antiphon, its subsequent single releases and vinyl rerelease of the 2006 classic The Trials of Van Occupanther, it was unclear whether we’d actually get any new music. Late last year, the band announced on social media they were back in the studio working with Grammy Award-winning record producer John Congleton. Last Friday, Feb. 5, Midlake let fans know that “LP5 is in the can! ... More soon but here’s to all y’all for hanging with us through the years!”

Also last Friday, new Fort Worth band Tan Recluse released their first single, “The New Now.” Tan Recluse makes the kind of music for older punk fans — of bands like Leatherface, Hot Water Music or Off With Their Heads — who are tired of moshing but still just as disillusioned with the world of consumerism and superficiality.

Jazz fusion band Skinny Cooks turned up the funk on their latest single, “Leviathan.” Featuring the words and music of Nigel Newton and Brianne Sargent with help from the acclaimed Robert Trusko on bass, the Cooks’ first studio release in over four years is promised to be the first of many new tracks to come this year.

Bifocals, the surprising new post-pop band comprising members from North Texas indie-rock bands Fun Button and Mr. Breakfast, have released their first single, “Secure the Bag.” Brooding and synth-heavy, the song makes misery danceable, like the soundtrack of your favorite John Hughes films. The band’s debut, six-song EP will be out March 1.

The singles just keep on coming for alt-country outlaws Ottoman Turks. The band’s second single of the year (and third since November) “Wound Up” is available on most streaming services Feb. 12. As with their previous releases, the song will also come coupled with a new video. This one is set during a wedding, with the Turks as a wedding band. Let the crashing begin.

Xavier Bernazard is a Latinx, nonbinary indie-pop singer who released their first single “Break My Own Heart.” The song speaks about breaking free from a toxic relationship. Drawing inspiration from pop icons and Latinx artists such as Fiel a la Vega, La Quinta Estacion, La Oreja de Van Gough and Calle 13, Bernazard music carries a distinct Latin vibe that makes it as easy to listen to as background ambiance as it is heartbreaking when blasting in the foreground.

Contemporary Christian artist Brandon Hixson’s new album Time Marches On is available now. The singer’s eighth album has nine new songs, including a version of his song “Autumn Fall” recorded by a live orchestra in London. The album is available on all major downloading platforms including iTunes and Spotify.

Polydogs’ new single and video “Blue Buddy” will be available Saturday, Feb. 13. Upbeat rock ‘n’ roll with just a hint of psychedelia, “Blue Buddy” and its video will be premiered at the band’s show at Tulips in Fort Worth Saturday. The band will release another single, “Daddy,” that night.

Across town, Anthony Attalla will be DJing at It'll Do Club with support from Dope Kiti and Turner.

In Terrell, country band the Casey Donahew Band will play at the Silver Saloon with support from Hayden Haddock.

For Valentine's Day on Sunday, Tulips in Fort Worth will host a Troubled Hearts Club Anti Valentine's Day concert with sets by Rosegarden Funeral Party and Noogy.
KEEP THE DALLAS OBSERVER FREE... Since we started the Dallas Observer, it has been defined as the free, independent voice of Dallas, and we'd like to keep it that way. With local media under siege, it's more important than ever for us to rally support behind funding our local journalism. You can help by participating in our "I Support" program, allowing us to keep offering readers access to our incisive coverage of local news, food and culture with no paywalls.
Make a one-time donation today for as little as $1.