Review: My Morning Jacket Brings a Tight, Focused Explosion of Musicianship to the Factory 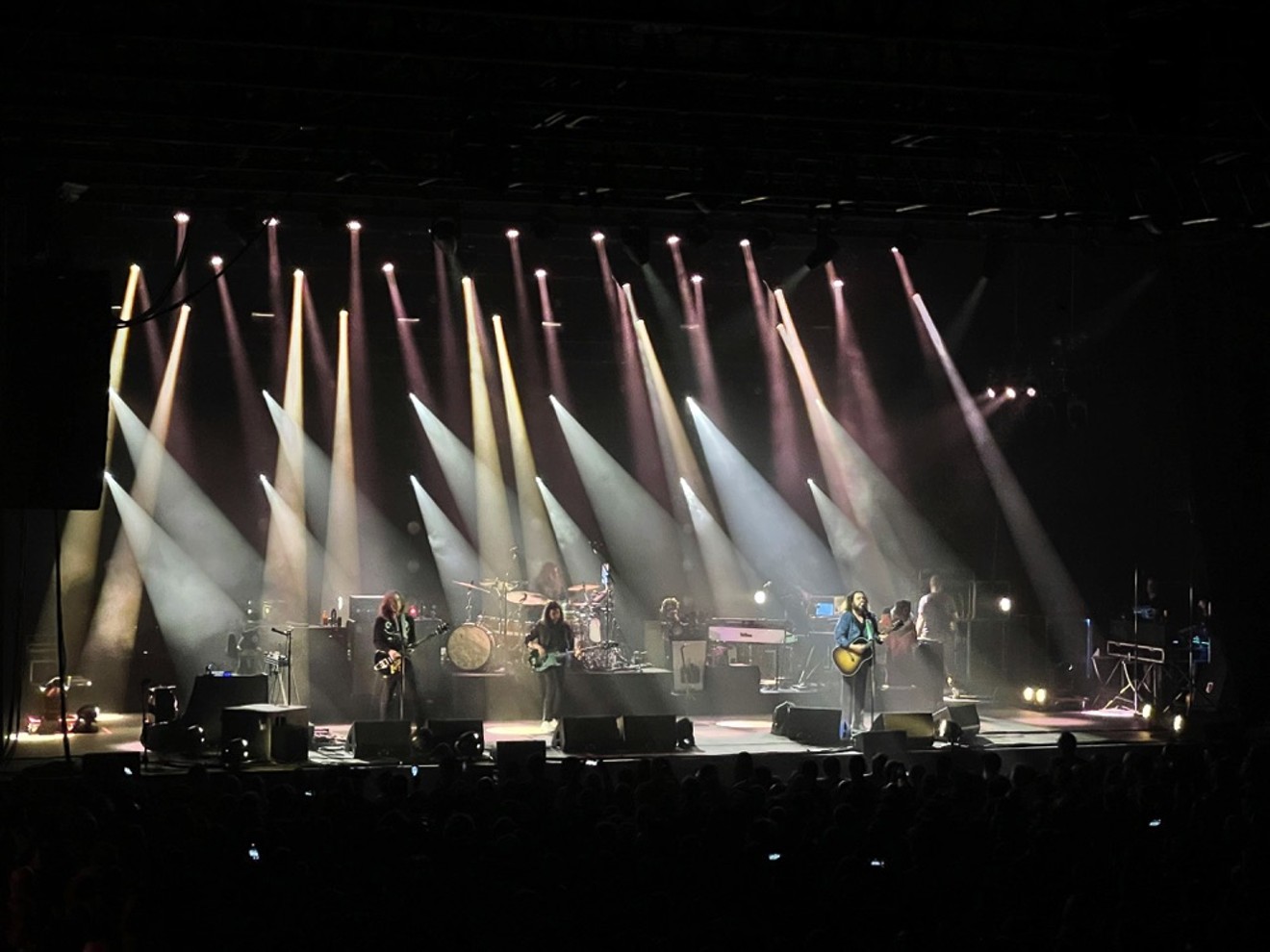 Stepping onstage at the Factory in Deep Ellum and making, from all I could discern digging around prior to the show, its first appearance in Dallas proper in 14 years, the band — led by wild-maned Jim James and his intergalactic falsetto — simply plugged in and let it rip. (James offered a grin and a thumbs-up to the crowd as he entered and prior to beginning a four-song encore, but spoke not a word of greeting all night.)

Perhaps that intense focus on the matter at hand is why the quintet — James, guitarist Carl Broemel, bassist Tom Blankenship, keyboardist Bo Koster and drummer Patrick Hallahan — sounded and felt sharper than it has in years, certainly more crisp and dynamic than its last trip through North Texas seven years ago at the then-Verizon Theatre.

There’s also the matter of creative retrenching on the band’s self-titled ninth studio album, released last year. The 11 songs there recapture some of the woolly brilliance of the band’s unimpeachable early run, downplaying some of the funkier, more esoteric impulses found on efforts like 2008’s Evil Urges or 2011’s Circuital.

The Factory in Deep Ellum wasn’t packed to the walls, but it was quite full, and the audience was primed for the psychedelic journey My Morning Jacket was only too happy to facilitate. The visceral combination of lights and sound at several points bordered upon the hallucinatory, as during the eye-searing climax of “Wordless Chorus” or again later during the one-two punch of “Lay Low” and “Picture of You.”

James and Broemel frequently dueled, heads bowed and nearly touching as their fingers raced along the fretboards, sending flurries of notes spiraling through the air. Hallahan’s senses-rattling backbeat meshed with Blankenship’s nimble rhythms, as Koster’s keyboard flourishes knit everything together. The band, simply put, was locked in tighter than a bank vault.

The set list, unfolding over two hours and change, moved briskly, bearing the weight of more than 20 years’ worth of music with ease.

The opening six-song run, moving from the just-released (and show opening) “Regularly Scheduled Programming” to “Circuital” to “It Beats 4 U” to “Wordless Chorus” to “Touch Me I’m Going to Scream Pt. 2” to “At Dawn” was a breathless survey of the breadth of My Morning Jacket’s capabilities, stacking one epic atop another and capturing the arc of the band’s evolution.

I found myself more than once reflecting back upon that 14-year-old Dallas gig, a still-legendary 2008 stop at the then-Palladium Ballroom, complete with an Erykah Badu encore cameo and a set that stretched for more than three hours, and marveling at how the go-for-broke energy of youth has been harnessed and channeled into a performance that is no less intense, but far more thoughtful about how to achieve maximum impact.

Thursday’s performance did not unseat the 2008 set as the best My Morning Jacket has ever been on a Dallas stage, but there were moments when they came damn close. That said, it was enormously satisfying to watch a top-tier rock band lean into its strengths, pull an audience into its ferocious artistry, and simply let the songs speak for themselves.
KEEP THE DALLAS OBSERVER FREE... Since we started the Dallas Observer, it has been defined as the free, independent voice of Dallas, and we'd like to keep it that way. With local media under siege, it's more important than ever for us to rally support behind funding our local journalism. You can help by participating in our "I Support" program, allowing us to keep offering readers access to our incisive coverage of local news, food and culture with no paywalls.
Make a one-time donation today for as little as $1.