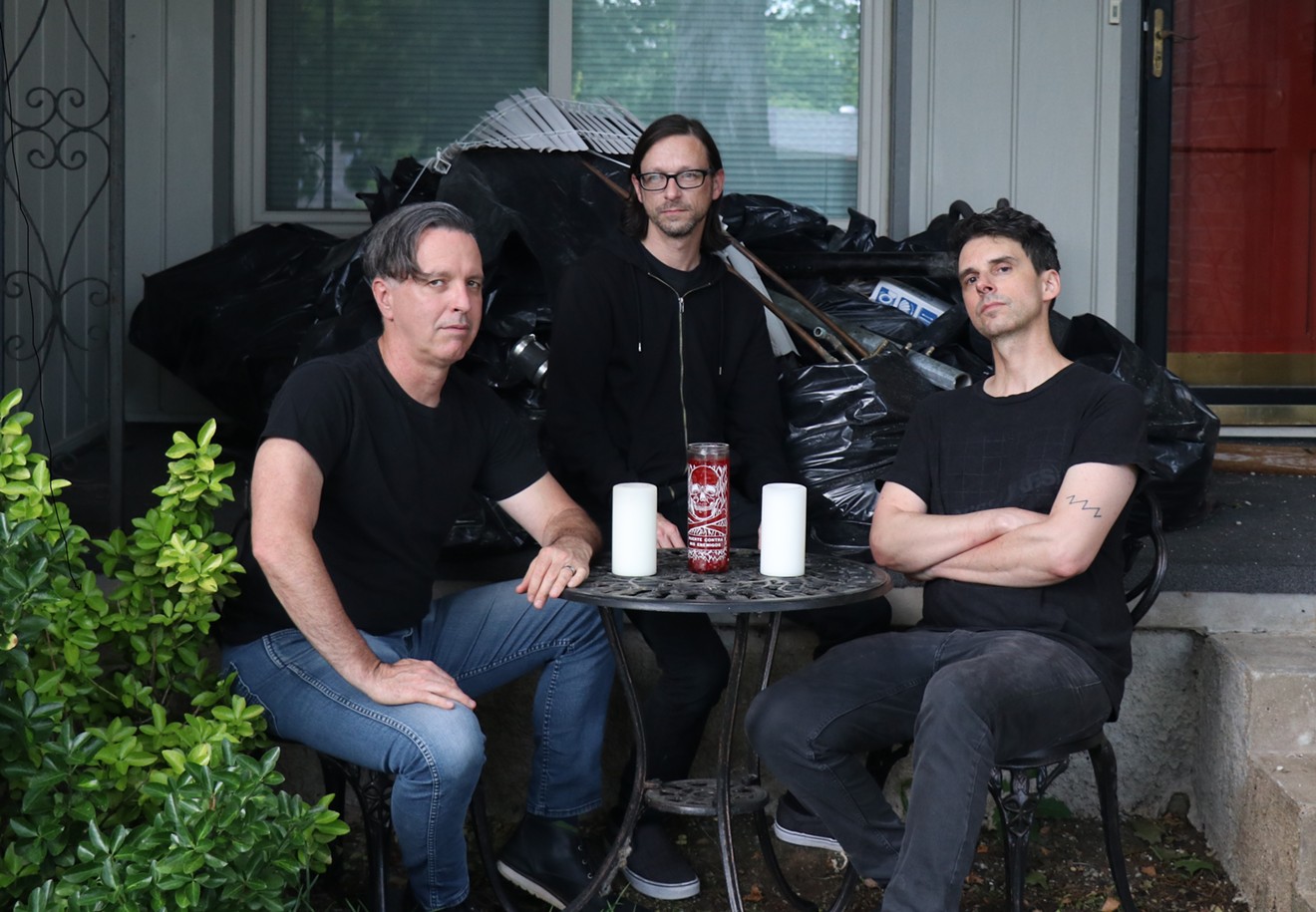 Grant Ring
Nervous Curtains has been a staple in the Dallas music scene for more than a decade, executing their post-punk musings over the course of five albums and one film score. While the band's sound has evolved with each release, it's not what one would generally think of as dangerous.

The group's latest release I Tried to Fight It But I Was Inside It is a giant leap into something less casual and more immediate, a synth-driven post-punk take on similar topics that less polished punk and hardcore bands were exploring throughout the Reagan years. Different times, new problems — and a newer sound, an appropriate evolution more in sync with our technology-driven society.

As the title suggests, this was an album that is meant more than a piece of art that they wanted to make. It’s an album they absolutely had to make, a collection of songs driven by purpose.

“We were angry about the state of our society and the state of the world. We still are," frontman Sean Kirkpatrick explains. "I can’t fathom seeing this level of injustice, inequality and cruelty without responding to it as an artist. It feels necessary.” That sense of purpose underlines every track in what turned out to be Nervous Curtains' most fully realized album to date.

Written and arranged over 18 months with his band mates, Ian Hamilton on keys and Robert Anderson on Drums, they recorded all of the synthesizers at home before heading to Elmwood studios to record drums, vocals and some overdubs with engineer Alex Bhore, marking a different approach from their past recording experiences, which entailed recording the band live. This allowed the band to spend more time working out every detail of the synthesizer work.

Overall, the production on the album is a true standout.

"Alex had a vision for how these songs could be presented, and he deserves a lot of credit for the finished album," Kirkpatrick says of Bhore.

Nervous Curtains will be playing on Sept. 7 at Harvest House in Denton and Oct. 19 supporting Legendary Pink Dots at Three Links.


"I can’t fathom seeing this level of injustice, inequality, and cruelty without responding to it as an artist. It feels necessary.” – Sean Kirkpatrick

Nervous Curtains have always been a keyboard-driven band teetering into the realms of indie rock, but from the opening track “Mass Amnesia” it's immediately apparent that the outfit is fueled by something more ominous and a lot less polite. As syncopated and exploding synths jet out of the speakers, Kirkpatrick rants about zombie corpses of Neocons, trails of Broken Mirrors, and Genocidal Generals. Punk attitude over harsh synthesizers and danceable beats recall a formula used on Primal Scream's XTRMNTR album from 2000, an admitted influence on the band, but with radically different results. In Nervous Curtains' case, the anger fueling the music comes off a lot more sincere, straight to the point and very much the product of our current turbulent times.

Throughout the album, Kirkpatrick mainly operates in tense metaphors and fragmented phrases with occasional bouts of directness, but the pointed attack of the politics motivating every breath is unmistakable in every instance. Lyrics like “The anti-establishment that worships the badges/ Provocative calls to defend your family/ Weekend survivalists and armchair fanatics and punk-rock right-wingers rockabilly radicals/ They advertise the darkest days/ To enforce their extremist ways.”

The lyrics may resemble a cluster of soundbites from a Young Turks broadcast, but only re-affirm how in sync these songs are with the politics motivating them. Bold, audacious, determined and absolutely in your face. Songs fueled by frustration from a system run amok.

“People are vulnerable; they’re living in or on the edge of poverty with little to no access to healthcare and decent education," Kirkpatrick says, with uncontained passion, while explaining the motivation behind his work. "Capitalism is in crisis, and fascism historically steps in to fill the void. Demagogues will shift the blame to minorities and migrants. It’s not enough to just be anti-Trump or even anti-fascist. That’s where the idea for the album title came about. How can you fight these most vile elements of racism and misogyny while participating in the system that upholds them, especially when we’re all just trying to get by?”

Profound words for a heavy band that genuinely embodies the term "synth punk." No guitars needed for this sonic assault, and with all of the political bravado, it's easy to forget that the album stands on its own musical merits. Nervous Curtains has always grown with each new release, but with I Tried to Fight It But I Was Inside It they have taken a gigantic leap.