Premiere: Leah Lane Throws the Past Away in New Rosegarden Funeral Party Video 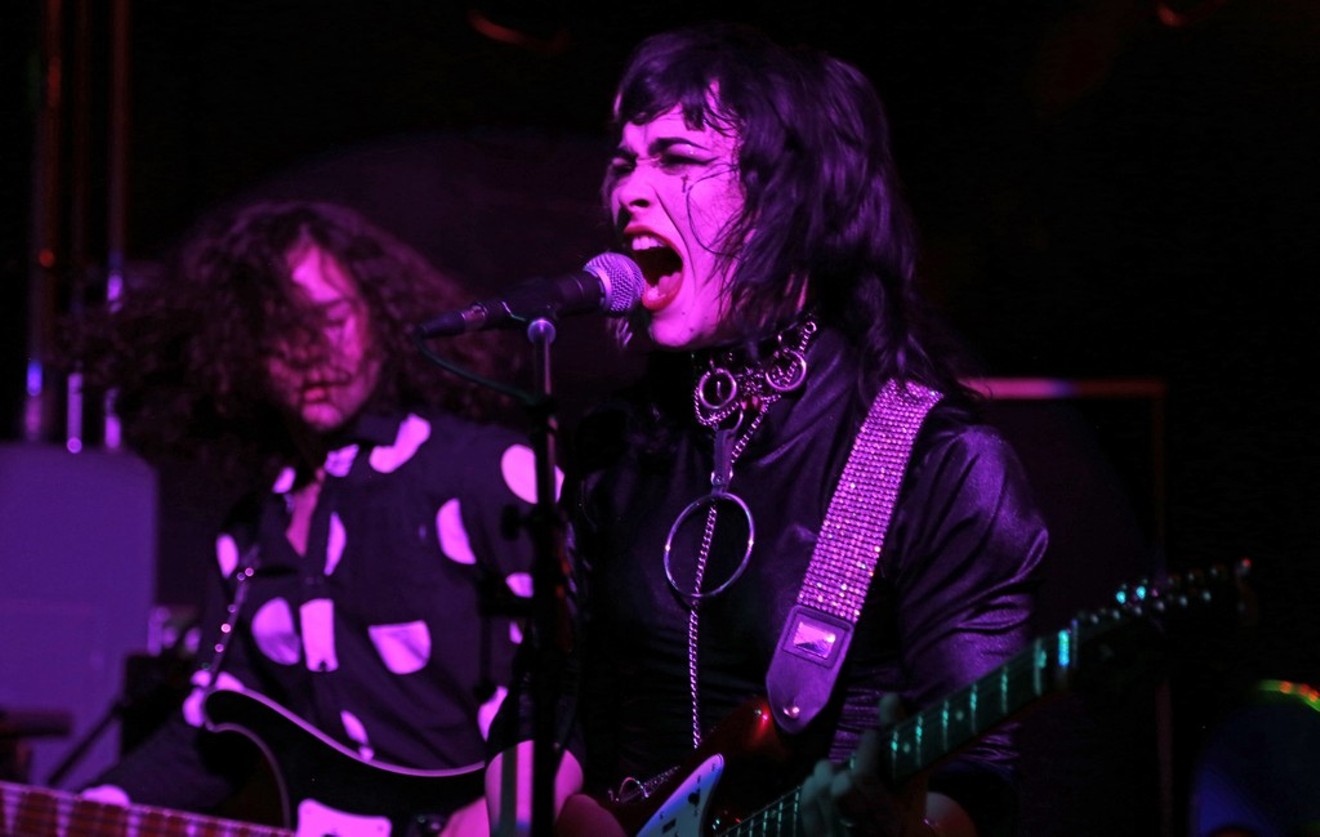 The demise of a three-year relationship, marred by physical and emotional abuse, fueled Rosegarden Funeral Party's newest release. The rock band is unquestionably one of Dallas' best, and Leah Lane serves as an enigmatic bandleader as lead singer, guitarist, songwriter and the force steering the group's creative direction. The tumultuous relationship between Lane and a former fiancé and band mate came to an end in December 2017.

The event ultimately changed the lives of Lane and the remaining members: Wil Farrier, Mikka Vanya Brightheart and Tate Christopher (who's no longer with the band) for the better. Rosegarden released their acclaimed EP The Chopping Block in March 2018 before taking off  to tour while playing a slew of local shows and maintaining a rigorous recording schedule.

It's a late Tuesday afternoon and Lane has a packed schedule. On the agenda is her work shift — fittingly at an Addison guitar shop — followed by a studio session to finish recording of the band's forthcoming album, Martyr, scheduled for release in the next two months. Minutes after leaving work, she drives a few blocks down the road and pulls into the parking lot of the Loving Hut vegan restaurant. Her precision and speed are particularly impressive given that she's driving a large 1999 Chevy Conversion van.

Lane is dressed in black, adorned with accents of red and silver. Her eye shadow is immaculately blended and matches the same color palette. She discusses the significance of the band's newest video for "Ill and Getting Worse" while panting lightly, still hoarse from recent studio sessions. "I kind of feel like my life hit a reset in January of 2018," Lane says. "The person and life that I thought I was gonna be and have fell out from under me in December 2017. I was engaged to a guy that I was really in love with, but it was my first real relationship and he was crazy abusive. Those things can breed codependency because I was deep in it and not ready to get out. I had to put my love somewhere."

The end of Lane's engagement was traumatic and simultaneously yielded suffering and enlightenment. She chose to channel her emotions into the band's success and growth. "I think that's part of what propelled us into so much action was that I was just not willing to stand still," she says. "I decided really fast that instead of killing the love that I had in my heart I was just going to repurpose it. So it was repurposed into Rosegarden Funeral Party with the same vigor and attachment and honestly codependency. It turned into a very codependent relationship not with my band mates but with the entity that is Rosegarden Funeral Party."

Erin Devany of All Hallows Productions, a frequent Rosegarden collaborator, directed the video, which was shot in Lane's apartment. The red-filtered visuals offer a trippy, psychedelic narrative of both love and heartbreak. The topic of love pertains to the initial connection between Lane and her ex and the love she has for the friends and fellow artists featured in the video, including Lorelei K, Aztec Death, Sub Sahara, Upsetting, DJ Oliver Sheppard and photographer Vera Velma, to name a few.


"I decided really fast that instead of killing the love that I had in my heart I was just going to repurpose it." – Leah Lane

The setting is an impromptu good-vibes-only house party, cut with shots of Lane physically acting out in ways that illustrate the pain and anguish she went through during and after her relationship. The duality between the positive images seen at the party and the suffering of Lane by herself accurately describe most of her experience in the last year.

"The way I found my self-worth and became who I am today, which is not a perfect person and not a healed person by any stretch of the imagination, was through the love and support from my chosen family," Lane says. "All of the bands and people showcased in the video are people who had a very strong influence on saving my life. That's why they were picked to be in it, because I know for a fact that if it weren't for them I wouldn't be here."

Lane says every aspect of the video was intentional, down to the smallest details. The scenes where she's tearing paper apart, displaying extreme acts of anger followed by calm, symbolize the frenzy of a manic episode. There's a portion of the video in which Lane sits still in front of a static television, which was meant to represent the crippling depression and dissociation she experienced. The mix of good and bad, dark and light, is cathartic for Lane as well as those who endured the times with her. She hopes the video will serve as a beacon of hope to others who have had similar experiences and a sign that one can survive hardship.

The video's song is also the first single off The Chopping Block. All of the songs on the EP were written when Lane was still dating and playing with her ex, but the video takes a nostalgic look at the camaraderie and fortified friendships that resulted from a sad moment. While closing the door on that chapter, the band, and Lane in particular, are ready to usher Rosegarden Funeral Party into a new era, free of a troubled past.

Watch the video premiere below: