Can We Stop Making Kid Rock News? Yeah, Us, Too. 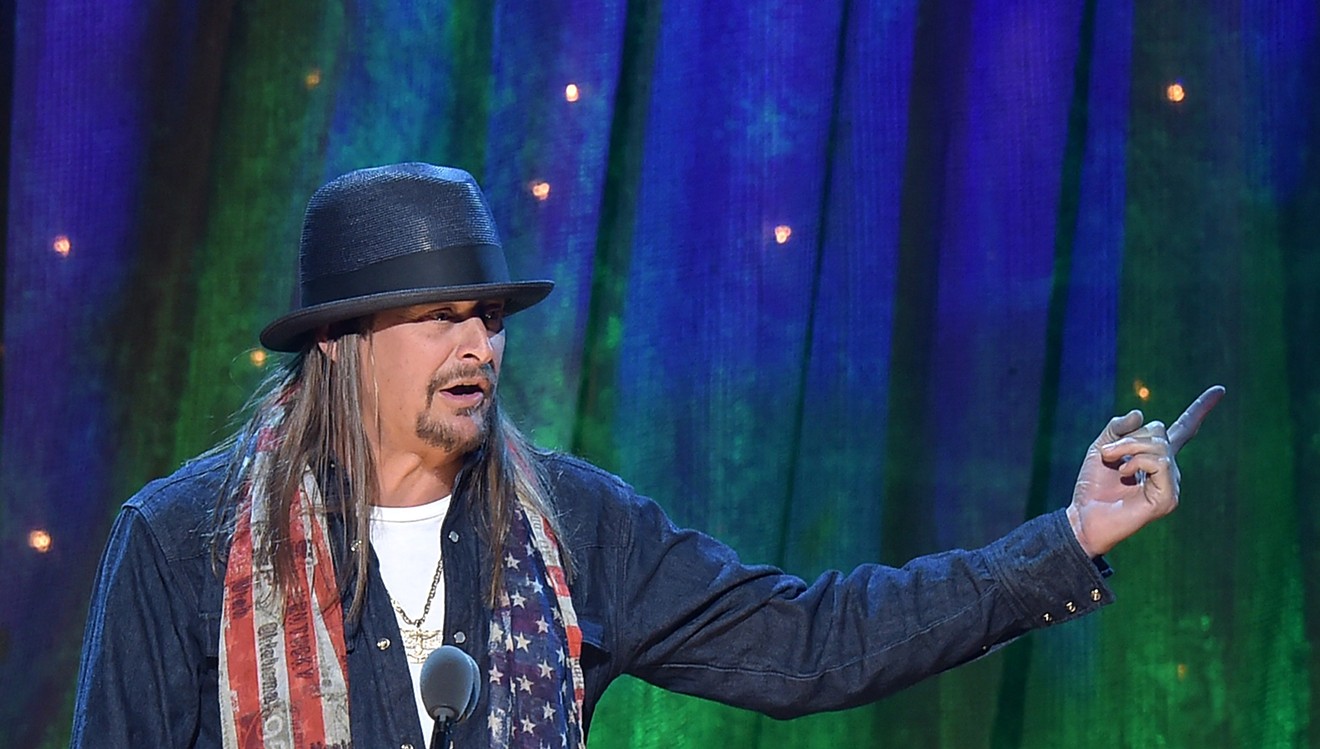 Who's even listening to Kid Rock? The smartest thing he's ever said was "I do" to Pam Anderson. Theo Wargo
We’re well aware at this point that every time we talk shit about the flare-decorated punching bag that is Kid Rock, our fists are claiming the entire world’s sloppy seconds, but how can you blame us when he periodically proves himself more unlikable in thriving off unfavorable press?

Just over the last week, the musician (meh) attracted headlines after calling iPhone-wielding fans in Tennessee a homophobic slur. Amid the predictable backlash, he took to Twitter on June 9 to say, “If Kid Rock using the word f**got offends you, good chance you are one.”

The personification of a Butsch Light can filled with meth bong water continued, “Either way, I know he has a lot of love for his gay friends and I will have a talk with him. Have a nice day. -Bob Ritchie.”

Following this tweet, he attracted even more spotlight from the press, albeit by proxy to former President Donald Trump, as outlets such as Reuters, Snopes and Newsweek fact-checked viral social media posts claiming that QAnon followers were purchasing fake tickets to an event dubbed “The 2nd Inauguration of Donald Trump as President of the United States” for $1,200.

As these sites have sufficiently established there is no known veracity to these claims, but the photoshopped picture of a ticket stub forced upon us the grueling displeasure of having to remember Rock’s existence, as it also said, “Special musical guest stars: Ted Nugent and Kid Rock.”

Stock photo watermark notwithstanding, it’s at least understandable why people believed it. After all, it is well-documented that the son of a car dealership mogul masquerading as a voice of the flyover proletariat has long aligned himself with the former president in playing his rallies and being one of his most vocal, high-profile supporters.

Having said that, we can already see the comments coming from people with avatars of Trump caressing the American flag. We know these social media mouthpiece will be tempted to say something along the lines of, “Of course the libcuck media Soros bitches at the DUMBASS Observer would hate on Kid Rock all because he supports Trump” upon reading this (or maybe just the headline), but believe it or not, Kid Rock was a terrible artist and human being even when he supported former Presidents Bill Clinton and Barack Obama.

We would argue that he was the same person back then as he is now: a brazen opportunist of an entertainer who feeds off the antagonistic relationship he has with his detractors and the media.

“If Kid Rock using the word f**got offends you, good chance you are one.” – Kid Rock


Remember that time four years ago when Rock announced that he would run for U.S. Senate? He later told self-branded entertainment industry insiders like Howard Stern and Bob Lefsetz that he wasn’t serious about wanting to run for office, because of course he wasn’t. Chances are, he realized that 2017 was a good year for unlikable celebrities with political aspirations and saw an opportunity to galvanize those who hate him and make fans love him even more.

Because he’s one of those entertainers.

The reason we know this is because entertainers like that are rather common, and the Venn diagram of those public figures and those who make it their personality to be against schlagworts like “political correctness” and “cancel culture” is almost a perfect circle. To this day, our one negative review of a song by Tom MacDonald is still expressly cited in the conservative rapper’s Wikipedia page despite the fact that we published that story over a year ago, and it’s difficult not to picture MacDonald making that edit himself.

Like MacDonald, the grease-covered fetal sloth known as Kid Rock is one of those people, and when this Bob Richie fella is done talking to his client about how he’s a shitty person for flippantly using a word disparaging to gay people, we hope that Mr. Richie and his client’s totally real gay friends can talk him out of also being mundanely predictable.
KEEP THE DALLAS OBSERVER FREE... Since we started the Dallas Observer, it has been defined as the free, independent voice of Dallas, and we'd like to keep it that way. With local media under siege, it's more important than ever for us to rally support behind funding our local journalism. You can help by participating in our "I Support" program, allowing us to keep offering readers access to our incisive coverage of local news, food and culture with no paywalls.
Make a one-time donation today for as little as $1.