How I Learned to Stop Worrying and Love Post Malone 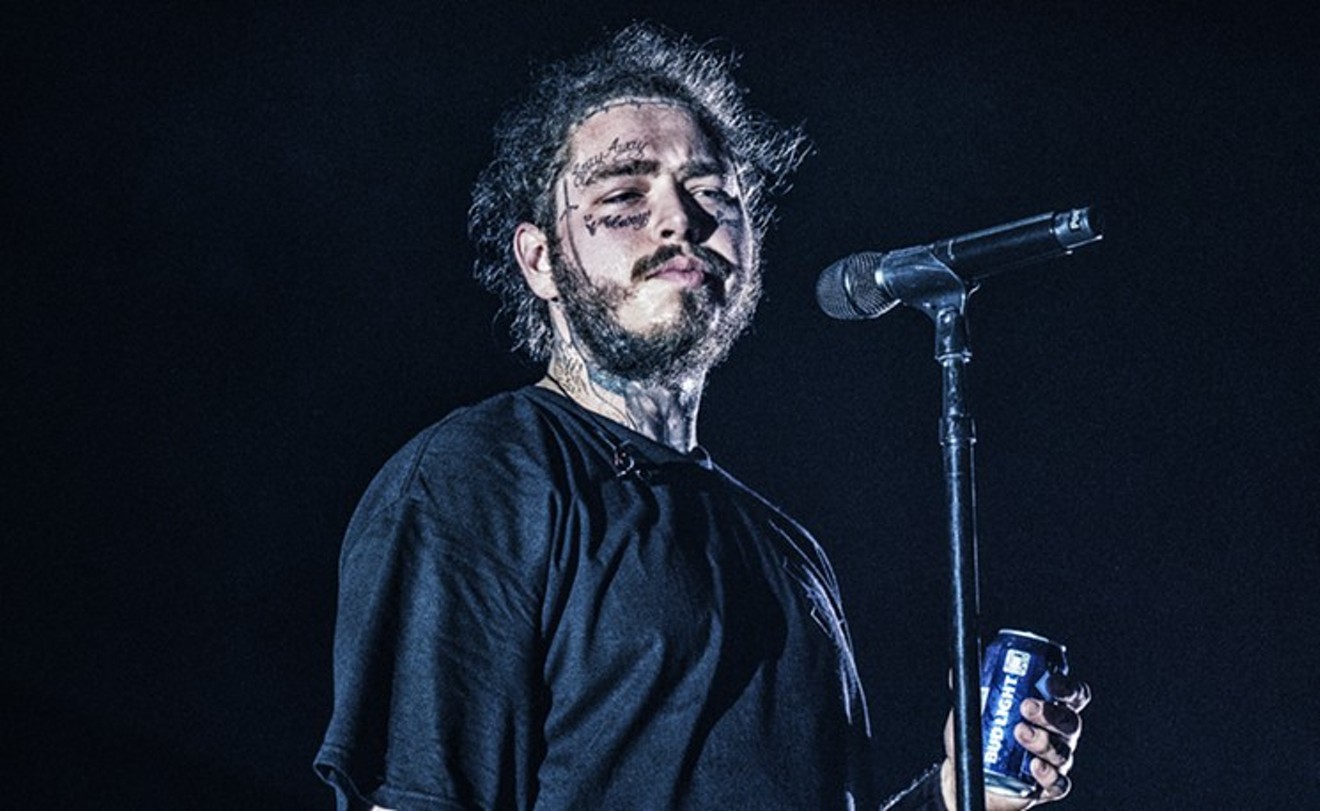 Post Malone is too damn lovable to have haters, even among music journalists. Mike Brooks
A shaky iPhone camera steadies on a glorious sight: 24-year-old Austin Richard Post, cloaked in black and dripping with jewelry, is vibing to the stylings of Canada’s finest, Shania Twain. While Twain serenades the American Music Awards crowd with the boppiest of bops (“Man! I Feel Like a Woman!”) Post bounces around like a child on Christmas morning teeming with excitement and too much eggnog. The video is annoyingly adorable even before Post Malone starts singing along to the chorus. Predictably, the video went viral, amassing over 6 million favorites as of this writing and searing an uncomfortable yet irrefutable truism into the stone cold heart of this writer: Austin Richard Post, better known as Post Malone, is lovable.

Like any uncomfortable truth, I struggled to come to terms with my love for the man they call “Posty.” Born in Syracuse, New York, but partly raised in Grapevine, Posty is technically a local who has achieved success on an international scale and therefore demands to be loved by anyone calling themselves a Texan or a Dallasite. However, the use of the term “Dallasite” tells you I am a horrendous representation of the city of Dallas, and every fiber of my being yearned to dislike Post Malone.

There are many reasons. His lyrics are often juvenile to the point of parody; his washed-out vocals can be whiny to the point of unbearable cringiness; and he publishes content like this tweet. Furthermore, his second studio album was titled Beerbongs & Bentleys, which sounds like the title of a mixtape released by an aspiring rapper from the Dallas suburbs because it literally is — Posty reps Grapevine, and my high school friend Mike (last name redacted to save him embarrassment) released a mixtape with at least two of those words in it when we were still learning how to shave at a Dallas private school. Everything about Post Malone, from his unfortunately titled album to his love of Lights both Bud and Miller, made me want to bemoan the state of music and demand that he take a shower. But, not wanting to judge a CD by its seedy cover, I listened to some of Beerbongs & Bentleys. While I could not forgive him for that name, I discovered that his music was not wholly irredeemable.


Posty, for all his flaws and face tattoos, has charisma to spare.

Like the man himself, Posty’s music has its undeniable charms. He can create some irresistibly catchy hooks (see “Candy Paint”) and always seems to have a rapper on speed dial ready to deliver a cold-as-hell feature (see “Rockstar,” where 21 Savage drops a predictably icy verse to help Posty reach No. 1 on the charts).

Therein lies what may be Posty’s best asset: his friends. Modern rappers are just as often curators as they are creators. Travis Scott has shown what is possible when you get together a killer group of hip-hop kings and queens, and Posty has also acknowledged the value of an amazing feature. The result is hits on hits on hits. The vocals and production on Beerbongs & Bentleys were a marked improvement over his debut, Stoney, but the album’s power lies in its ability to deliver bops like “Better Now” and hits like “Candy Paint” and “Rockstar.”

The hit-making only continued on Hollywood’s Bleeding, Posty’s latest and greatest release. Songs like “Wow,” “Allergic,” “Enemies,” “Staring at the Sun” and “Sunflower” all offer the kind of incredibly catchy choruses that even the most ardent haters (see: me) cannot deny. His curatorial flexing was on full display, too. Unfortunate taste in beer aside, you have to throw some respect at someone who gets SZA, Ozzy Osbourne, Travis Scott, Future and both of the industry’s hottest babies (DaBaby and Lil Baby) together for one record of bangers. Nevertheless, this steady improvement in musical quality is not the reason I now love Posty. Hits are hard to make, but they are nowhere near as difficult to curate as charisma. Yet Posty, for all his flaws and face tattoos, has charisma to spare.

Take, for example, his venture to Olive Garden with Jimmy Fallon, or the endearing authenticity he displayed in a “Celebrity Goes Undercover” video for GQ. It takes an otherworldly level of charm to make content like a painfully staged trip to the Times Square Olive Garden look and feel both fun and organic, but Posty pulls it off. Wherever you look, Posty is shedding his sad boy persona and making people crack a smile or laugh.

Dallas-based singer and unapologetic Posty fan Emma Oliver says it best. When I ask her why she loves the grimy Grapevine superstar, her answer is simple: “I think I like him so much because he is authentically himself,” Oliver says. She praises his writing and style, but particularly digs the Posty charm. “I love his energy,” she says.

Oliver makes a compelling case for stanning Post Malone. In an industry abundant with posturing and inauthenticity, Posty dares to indulge his love of Crocs, beerbongs and breadsticks. He does not claim to be the next great rapper; he probably loves My Chemical Romance and Black Sabbath more than he loves Biggie. He dares to dance to “Man! I Feel Like a Woman!” like no one is watching, even though he knows millions are. And how can you not love that?
KEEP THE DALLAS OBSERVER FREE... Since we started the Dallas Observer, it has been defined as the free, independent voice of Dallas, and we'd like to keep it that way. With local media under siege, it's more important than ever for us to rally support behind funding our local journalism. You can help by participating in our "I Support" program, allowing us to keep offering readers access to our incisive coverage of local news, food and culture with no paywalls.
Make a one-time donation today for as little as $1.