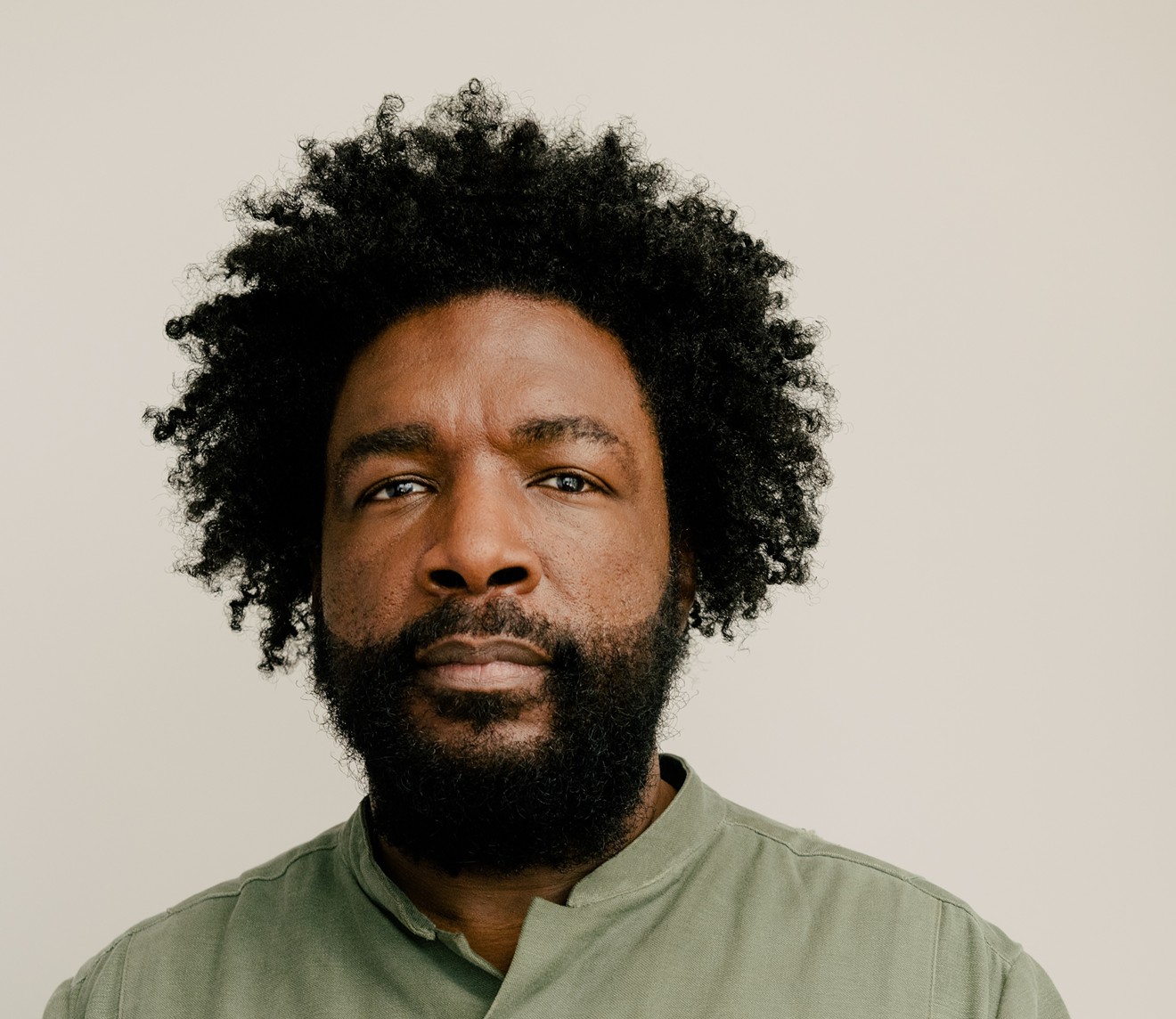 The multi-talented Questlove won an Oscar this year. If you forgot, maybe it's aa little scuffle took place minutes before his speech. Daniel Dorsa
This is now a statement of fact: In terms of music consumption, hip-hop surpasses rock as the most popular genre. Hip-hop is younger than rock by two decades, and the date of its exact birth is far easier to pinpoint. It happened on Aug. 11, 1973, when DJ Kool Herc held his famous birthday party in the recreation room of an apartment building in the Bronx.

Approaching 49 this year, the history of hip-hop and its influence in popular culture have been broken down plenty through documentaries, TV series, books and oral histories, but rarely have fans seen it presented through symphonic and visual grandeur.

On April 16 at The Factory in Deep Ellum, Questlove, Oscar-winning documentarian, drummer, DJ, producer, New York Times best-selling author and member of The Roots, will bring a new meaning to weekend brunch. He will host Hip-Hop Brunch: A Visual Journey Through Hip-Hop along with some help from the Dallas Symphony Orchestra. The experience is a one-of-kind collaboration that employs the visual artistry of two Dallas-based artists: JM Rizzi and Jeremy Biggers.

Rizzi and Biggers promise to deliver a projection-mapped 3D environment that gives attendees the stories and imagery of the songs. Think Frida ]-Kahlo-immersive-art meets the expert curation of songs by Questlove with the DSO all in one. The collaboration has been in the making since 2021, when J. Damany Daniel, founder of event production company The Event Nerd, pitched his idea to Biggers even before Questlove was brought on. Rizzi confirms that this has been in the making since last year, as a labor of love for anyone who is a fan of hip-hop.

Rizzi says he and Biggers are neighbors whose studios are near each other, which was perfect for working on how the visuals would be projected and mapped. Rizzi, a muralist whose work is influenced by abstract expressionism, has lived in Dallas for 11 years. He lived in New York during the ‘90s, where he got into graffiti and street art. He says hip-hop is an important aspect of his life, and he was particularly a fan of Public Enemy, Eric B. and Rakim while growing up.

“I was a counterculture kid,” Rizzi says. “I was a skater, but I was also a metalhead. Back then, you could be all these different things. You could listen to metal, punk, hip-hop. [It] all came together with graffiti and skating. It was an interesting counterculture time, and I fit right into that.

“It influenced me being in that era of hip-hop and then going into the golden era, particularly in New York. There was so much sampling going on, where you would hear these dope beats and then find out the songs that they sampled and then get into jazz and funk. Hip-hop just opened so many different types of music genres for me.”

Biggers was born and raised in Dallas and his name is recognizable in the art scene as someone who wears multiple hats as a photographer, graphic designer, painter, muralist and filmmaker. He’s also known as the muralist behind the two-story mural of Selena Quintanilla in North Oak Cliff and the Nipsey Hussle mural at the Glendale Shopping Center. To be a part of Questlove’s Hip-Hop Brunch is a full-circle moment for him. The first concert he ever attended was a Roots and Lupe Fiasco show around 2005 before the release of Lupe’s Food & Liquor at the storied Prophet Bar in Deep Ellum.

Biggers says events like this, which preserve hip-hop history for future generations, are paramount.

“Some of the pioneers that built this and created this genre are still alive,” Biggers says. “When we look at other genres, the greats are all gone already. To see the greats just now hitting their 60s, 50s, it’s cool to see hip-hop culture get old.”

The Hip-Hop Brunch will be an opportunity for other local artists to show off their skills. Eric Trich and Alda Boyd will assist Biggers and Rizzi in bringing the journey of hip-hop to life, while composer Sylvester “Sly5thAve” Onyejiaka will help curate a score alongside Questlove. A Southern-style family brunch will be provided by Low Country Quisine, with special selections from Brunchaholics. And finally, the event will benefit two local nonprofits, Dallas Black Dance Theatre and Big Thought. The organizers' goal is to merge music, and the visual and culinary arts while giving back to two organizations whose missions are to elevate diverse communities.

Rizzi is strictly a rap purist who doesn’t celebrate mediocrity. He believes hip-hop’s past is still ripe for discovery.

“What this event is going to do is peel back some of those layers and show [that] you know this beat, but maybe you don’t know where it is from and how it is connected to other songs,” Rizzi says. “And then you find out, ‘Oh, I never heard of this person.’ And they have five albums from the ‘70s and they’re dope. Now that’s in rotation. And then because of the algorithms with Spotify, Spotify starts serving up more stuff like that. You realize, ‘Wow, there’s so much more to discover.’”

“This is something that elevates sitting in your car or sitting in your friend’s basement [listening to rap],” Biggers says. “Wherever you first fell in love with hip-hop, it’s taking that and aging it up with people that grew up with the artform.”

Hip-Hop Brunch: A Visual Journey Through Hip-Hop starts at 1 p.m. Saturday, April 16, at The Factory in Deep Ellum, 2713 Canton Street. Tickets are $75+ for GA tables at Axs.com.
KEEP THE DALLAS OBSERVER FREE... Since we started the Dallas Observer, it has been defined as the free, independent voice of Dallas, and we'd like to keep it that way. With local media under siege, it's more important than ever for us to rally support behind funding our local journalism. You can help by participating in our "I Support" program, allowing us to keep offering readers access to our incisive coverage of local news, food and culture with no paywalls.
Make a one-time donation today for as little as $1.