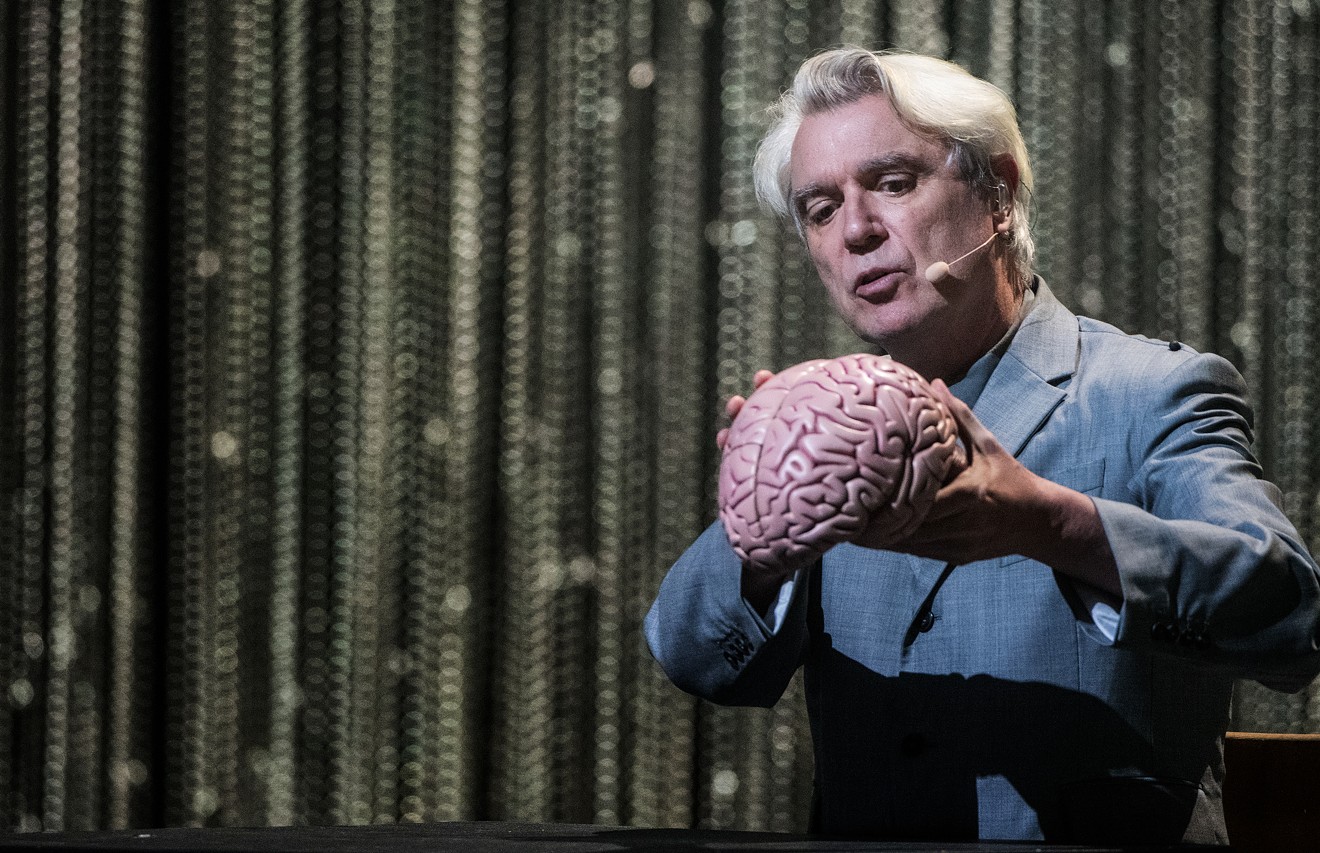 David Byrne singing to a brain. Mike Brooks
David Byrne is best known for groundbreaking music he made as frontman for the Talking Heads — a band with influence extending far beyond its late-'70s to mid-'80s lifespan. You can hear it in every corner of music today, from punk rock to hip-hop, pop and dance music. Talking Heads were the most popular flag-bearers of the art-centric side of the late '70s New York punk scene, which they quickly outgrew as they continued to push the envelope, bringing influences from all corners of the globe.

Byrne has continued this trend in his solo career and with his label, Luaka Bop. The label is responsible for bringing attention to South American Tropicália, African funk and world songs.

Byrne's latest tour made a stop at the Winspear Opera House on Tuesday night for his first Dallas appearance in six years. On his last trip, Byrne partnered with Dallas’ St. Vincent to support their 2012 collaborative album, Love this Giant.

This time around, he is touring behind his first solo effort in 14 years, American Utopia, an album that, going by its title, could easily slip into another sarcastic criticism on the dark cloud hovering over the American politics. But Byrne opts for something altogether more optimistic, a reoccurring theme for most of his live show.

For this tour, Byrne is decidedly in full-ambition mode.

“This is the most ambitious show I’ve done since the shows that were filmed for Stop Making Sense,” Byrne says, referring to the 1984 Jonathan Deme concert film that's one of the greatest of all time.

Mike Brooks
Perfume Genius, the brainchild of Seattle-based solo artist Mike Hadreas, opened for Byrne. If '80s new romanticism and Twin Peaks-era Julie Cruise had a favorite son, it might be Perfume Genius. Comfortably existing in a grand sense of melodrama, Hadreas was in the perfect venue for his cinematic pop music. He was an appropriate support act who fit the night's overarching musical theater motif.

Byrne utilized a stage setup that takes the concept of minimalism to the most literal conclusion. Unlike the opening of a typical arena rock show, the stage was empty, with no gear and a deceivingly simple silver rope curtain draped on three sides. Byrne sat at a table in the center of the dimly lit stage and serenaded a plastic brain. The opening song was “Here” from his new album, which is actually about his brain. The song and the stage prop served as an introduction to Byrne's artistic brain behind the grand vision realized in his live show.

As the opening song unfolded into the rest of the set, people marched through silver walls revealing an entire band carrying instruments. A six-piece percussion ensemble, keyboardist, bassist, guitarist and backup singers all operated wirelessly while consistently on the move. They were dancing, shaking and moving through the curtain.

Byrne transformed his band into moving stage props. The musicians' movements, combined changes in stage lighting, altered the scenery and the vibe of the show on every song. It was visually dramatic and bold in its execution.

About a third of the evening's set focused on classic Talking Head, with the most notable dose of crowd-pleasing nostalgia coming from “This Must Be the Place,” “Once in a Lifetime,” “Burning Down the House” and an astounding version of “The Great Curve,” which all got the crowd to stand up and wiggle. Of the other Talking Heads material, “I Zimbra” stood out as a perfect fit for the percussion-driven touring band.

For the rest of the set, Byrne pulled mostly from his past two solo albums, which stood out as the strongest material of the evening. He presented a moving version of “Doing the Right Thing” and a standout take on “I Dance Like This,” which started with all the band members lying on their backs on the floor. Surprise deep cuts in the set were the Fatboy Slim collaboration “Toe Jam" and the St. Vincent collaboration “I Should Watch TV".

The biggest surprise of the night came during the second encore, when the entire band was armed with percussion for a shut-it-down reinvention of Janelle Monae’s “Hell You Talmbout.” Until this point, Byrne's only political statement was to inform the audience of voter registration in the lobby. But the band came out singing "Hell You Talmbout" and taking turns screaming, “Say his (or her) name,” followed by a long list people of color who were murdered in recent years. It was powerful, sincere and an effective way to end the show.

At 65, Byrne continues to break the stereotypical mold of the elder statesmen rock star by never resting on his laurels or relying on the nostalgia of past glories. It would be easy for him to play the hits and cash out, but Byrne uses the live show to reinvent the musical arrangement and presentation of his back catalog.