Whether Singing Ballads or Rapping, Ed Sheeran Is a One-Man Show


Ed Sheeran is a powerhouse.

On Saturday, a scruffy, once-homeless ginger in baggy jeans wowed 60,000 people at AT&T Stadium. Now one of the biggest artists in the world, Sheeran filled the Cowboys’ home with his record-breaking hit songs and all with just a guitar. What he did with it proves he has earned his place as king of today’s pop charts.

No band. Just Sheeran, two mics, a loop pedal and a guitar, that’s it.

“Everything you hear tonight is completely live, it comes from this guitar, this microphone and this loop station,” Sheeran said Saturday.

Sheeran would start a song finger-plucking one of his globally recognized riffs, then step on a pedal that would play back the riff. He would then play on top of that recording, adding some strumming. Then he’d play on top of that, making a beat by drumming on the body of his guitar, and then looping that. He’d layer and layer, eventually adding in layers of his own voice, harmonizing with himself until he got the effect of a full band and choir.

Sheeran is a master on the guitar, playing so well that you could’ve sworn you could hear a piano, drums or a bass, but it’s all just Sheeran finessing the sound from his acoustic. During every song, whether a soft ballad or a rap number, Sheeran gave it his all.

There are many things that are astonishing about Sheeran. One is his songwriting, his ability to top himself on the charts over and over, becoming the staple voice you hear at every wedding. Another is his rise to fame through his purely raw talent. 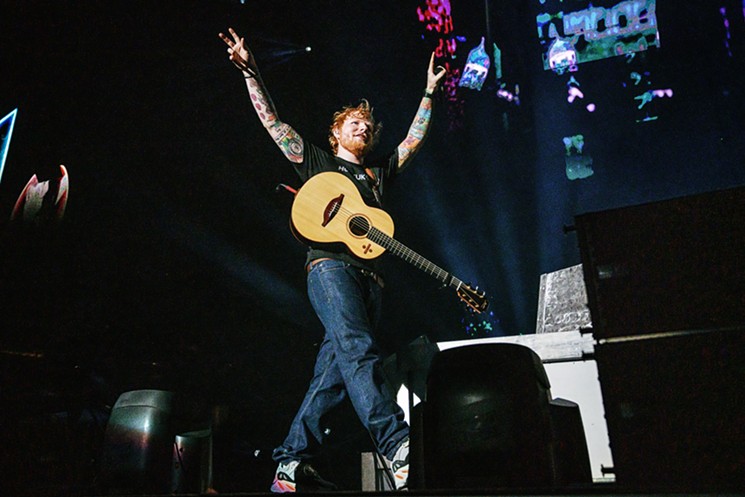 Lauv and Snow Patrol opened the show. Snow Patrol, who almost didn’t make it to the show because of a flight delay and received a police escort to get to the stadium, told the crowd that Sheeran opened up for them back in 2012. And now the 25-year-old band is playing stadium shows around the world with, as they call him, “Ed Freaking Sheeran.” Sheeran later talked about his relationship with the band, calling them his best friends.

Sheeran had many charming spiels over the night. He spoke about his two rules for enjoying a concert — which were singing and dancing and he called out the two kinds of people who usually didn’t follow the rules but thanked them for coming — boyfriends and super dads. Before singing his first big hit, “A Team,” he expressed his gratitude to the thousands in the crowd.

“I played some of these songs in my set at open mic nights to like two people," he said. "So to be able to play these songs to 60,000 people at the Dallas Cowboys Stadium is pretty great.”

Sheeran ended his set by getting the whole crowd to belt “Sing” with him. After he ran offstage, the stadium was filled with deafening screams and cheers for what seemed like a solid minute before the singer came back out to perform two more songs while wearing a custom Cowboys jersey with the number 18 and “Sheeran” on the back.

From some of the most recognizable love ballads out there like “Perfect,” “Thinking Out Loud” and “Photograph," to party anthems like “Shape of You” and “Galway Girl,” to incredibly impressive rap-filled songs like “Eraser” and “You Need Me, I Don’t Need You,” in which Sheeran spits carefully crafted verses at the speed of light, the world’s favorite ginger impressed.
KEEP THE DALLAS OBSERVER FREE... Since we started the Dallas Observer, it has been defined as the free, independent voice of Dallas, and we'd like to keep it that way. With local media under siege, it's more important than ever for us to rally support behind funding our local journalism. You can help by participating in our "I Support" program, allowing us to keep offering readers access to our incisive coverage of local news, food and culture with no paywalls.
Make a one-time donation today for as little as $1.