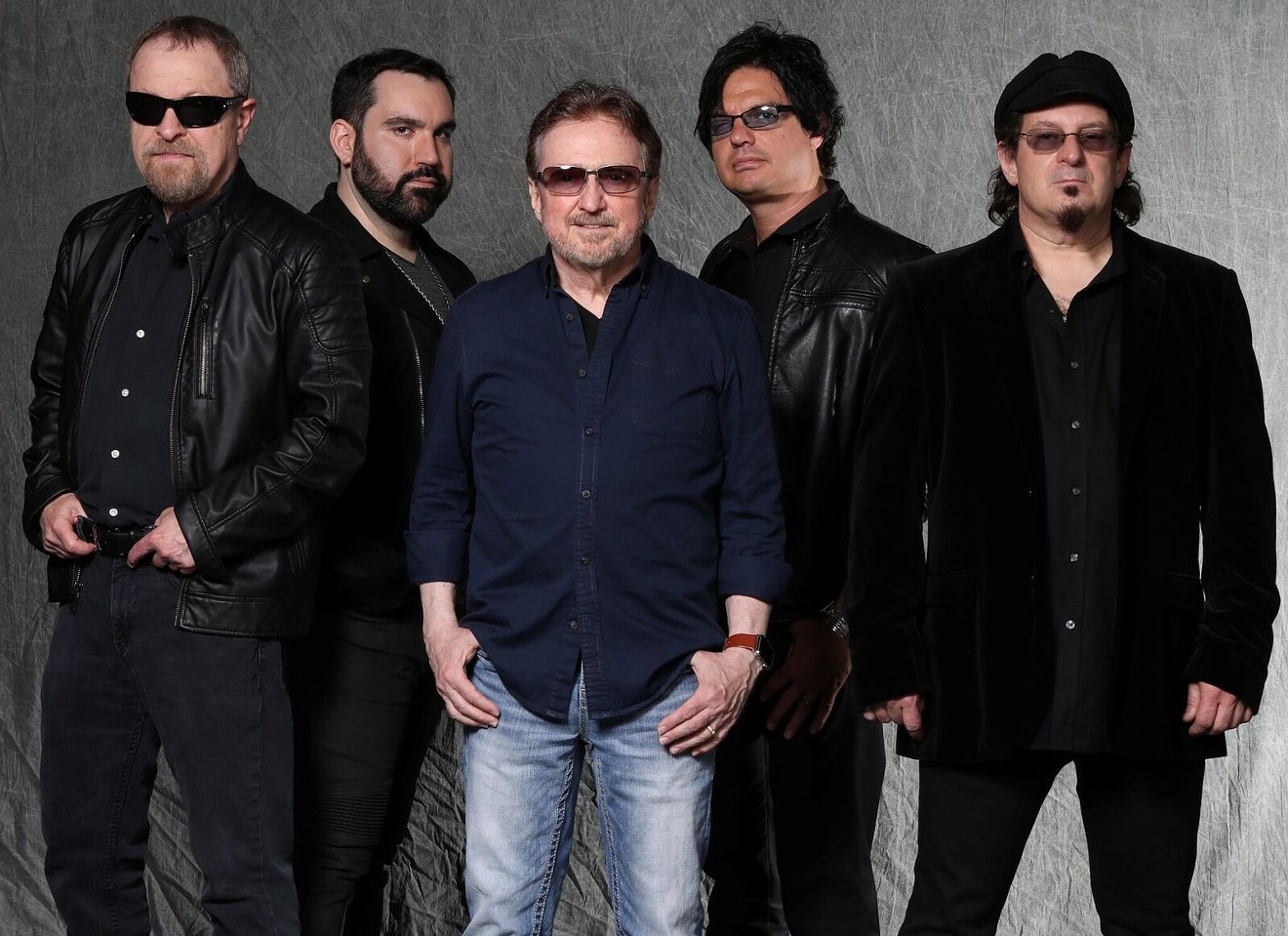 Let us tell you six reasons you should give your life savings away and get recruited by Blue Öyster Cult. Mark Weiss

The mighty Blue Öyster Cult, Long Island’s greatest contribution to modern culture aside from tea and Theresa Caputo, is returning to Dallas for a concert at the Gas Monkey Bar ‘N’ Grill with special guests UFO on Saturday. Once called “heavy metal for people who hate heavy metal,” Blue Öyster Cult are noted for their distinctly melodic and intellectual approach to the genre and have experienced a great deal of mainstream commercial success throughout the 1970s and early '80s.

The upcoming concert comes at a time of great anticipation for BÖC fans, as it was announced this June that the band was signing to Frontiers Records for not only their first record of new material in over 18 years, but a slew of reissues and unreleased live concerts — all expected to be released in 2020. Here’s a quick refresher as to why Blue Öyster Cult are one of the most criminally underrated rock bands on earth:

Buck Dharma
If Blue Öyster Cult are The Beatles of heavy metal, then Buck Dharma is their Paul McCartney. While not as immediately recognizable as the “face” of the BÖC, his voice has become the most iconic feature of its biggest hits, like “(Don’t Fear) The Reaper,” “Burnin’ For You” and “Godzilla.” Aside from singing, Buck is perhaps more acclaimed for his astronomical lead guitar playing — his fluid, eerie, effortless leads are as essential to the BÖC sound as the stars in Van Gogh’s night skies. Dharma’s real name is actually Donald Roeser; the name “Buck Dharma” was bestowed upon him as part of founding BÖC manager Sandy Pearlman’s original plan for all of the members of the band to have outlandish stage names. The other members quickly abandoned their pseudonyms, while “Buck” was the only member who kept his.

Eric Bloom
Instantly recognizable as the face of Blue Öyster Cult with his ever-present aviators and Jeff Lynne Afro, Eric Bloom has always been the band’s Svengali-like frontman, singing lead on the majority of the band’s songs and acting as their onstage master of ceremonies. Bloom’s shtick as a leather-clad rock god has only added to the band’s lore — including riding a motorcycle onstage to perform a cover of Steppenwolf’s “Born to Be Wild” or wielding a gauntlet firing a laser beam into a disco ball at the climax of the band’s concerts. An avid lifelong fan of science fiction, Bloom once wrote a fan letter to English sci-fi author Michael Moorcock, leading to Bloom and Moorcock collaborating on what would later become three Blue Öyster Cult songs: “Veteran of the Psychic Wars,” “The Great Sun Jester” and the dark and powerful “Black Blade.”

The old guys
Although not members of Blue Öyster Cult anymore, the band’s three other founding members were invaluable tools in sculpting the band’s precise aesthetic. Albert Bouchard remains one of the most underrated and unconventional drummers in rock, bringing a distinctly chaotic and jazz-influenced propulsion to BÖC. Bouchard also penned and sang several of the band’s best songs, such as “Cities on Flame with Rock and Roll,” “Dominance & Submission” and “Fireworks.” His younger bass-playing brother Joe was the last addition to complete BÖC’s classic lineup in 1970, adding a complementary style to round out the band’s unparalleled rhythm section. Like his brother, Joe also composed and sang several of Blue Oyster Cult’s fan favorites such as “Hot Rails to Hell,” “Nosferatu” and “Screams.”

Finally, every band has a secret weapon, like John Paul Jones or cocaine, and for Blue Öyster Cult it was keyboardist/guitarist/man-in-the-shadows Allen Lanier — rock 'n' roll’s very own cigarette smoking man. Like his bandmates, Lanier also contributed several songs to BÖC’s canon, yet only ever sang lead on one, “True Confessions” (which sadly has yet to be used by Jimmy Fallon for his Tonight Show comedy sketch of the same name). In 1973, Lanier brought then-girlfriend Patti Smith into the BÖC world, leading to a series of lyrical collaborations between the band and Smith, such as “Career of Evil” and “Fire of Unknown Origin.” Smith is also likely the object of romantic affection in what is perhaps Lanier’s best-known composition, “In Thee.” Lanier passed away in 2013, after having retired from BÖC six years prior.

On Your Feet or On Your Knees
Stripping the band’s songs of their lush production in favor of a sloppy, garage rock-like audience recording, Blue Öyster Cult’s first live album is not only a compelling document of a hungry young band on the ascent to their peak, but one of the most furiously thrilling live albums ever recorded. Several of the band’s best songs from their first three records are transformed into Godzilla-sized beasts, yielding definitive versions of “Seven Screaming Diz-Busters” (which features brain-scrambling guitar-and-drum interplay by Dharma and Albert Bouchard), “The Red & The Black” and the live favorite “Buck’s Boogie.” On Your Feet or On Your Knees peaked at 22 on the Billboard charts, making it Blue Öyster Cult’s highest-charting album and remains a perfect crash course in BÖC for the uninitiated casual listener.

The lyrics and the lore
Much of the band’s lyrics were written in collaboration with noted poets and science fiction/fantasy writers such as the aforementioned Patti Smith and Michael Moorcock, but of course, the band’s chief lyrical contributor was longtime manager and producer Sandy Pearlman, the “sixth member" of Blue Öyster Cult. Pearlman weaved a dense, interconnected, Dune-like mythos throughout all of his contributions to the band — one that many fans continue to decipher to this day. Some of Pearlman's recurring themes include alien activity, hellish motorcycle gangs, death — and, perhaps most confounding — the constant appearance of a character named “Susie,” who is mentioned in “Astronomy,” “Dominance & Submission,” “Before the Kiss (A Redcap)” and “The Marshall Plan” and seems to be a harbinger for dark and mysterious omens. Many of these recurring themes culminate and are concluded in the band’s 1988 album Imaginos — the last to feature the five classic members of the group together in any incarnation.

The new guys
Helping Bloom and Dharma maintain and elevate the current incarnation of Blue Öyster Cult in the 21st century is a trio of musicians who have brought their own unique take on the BÖC sound. Bassist Danny Miranda was originally in the group from 1995 to 2004, after which he became the touring bassist for Queen + Paul Rodgers until 2009. Miranda returned to Blue Öyster Cult after the departure of former Utopia bassist Kasim Sulton and has remained BÖC’s permanent bassist ever since.

Multi-instrumentalist Richie Castellano is the band’s newest secret weapon, originally joining on bass after Miranda’s departure in 2004, but later switching to keyboards, guitar and occasional lead vocals after the retirement of Allen Lanier in 2007. Castellano is an accomplished engineer and producer, having produced Regina Spektor’s debut album 11:11 in 2001, in addition to hosting a music-themed podcast since 2014 called Band Geek with Richie Castellano.

Rounding out the new blood is drummer Jules Radino, who has been steadily keeping the beat for Blue Öyster Cult since 2004, along with operating a variety of drum clinics in the Long Island area.
KEEP THE DALLAS OBSERVER FREE... Since we started the Dallas Observer, it has been defined as the free, independent voice of Dallas, and we'd like to keep it that way. With local media under siege, it's more important than ever for us to rally support behind funding our local journalism. You can help by participating in our "I Support" program, allowing us to keep offering readers access to our incisive coverage of local news, food and culture with no paywalls.
Make a one-time donation today for as little as $1.